Sometimes a thought crosses my mind, were we better during the British Raj? The British have certainly left us with such things without which India, as we know  today would have been incomplete and we might have been even struggling to make it to even being  a developing nation( Railways, English Language, Introduction to Western Education, Postal services etc .) 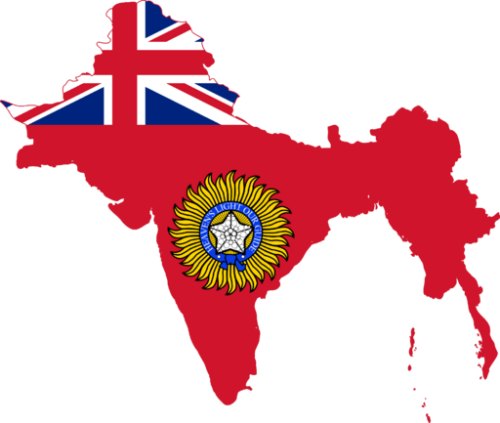 Image Courtesy: By DrRandomFactor (Own work) via Wikimedia Commons

God Forbid the number of scams that have been unearthed in the past couple of years might not have even taken place as the tentative figure we put to the Coalgate scam, could have been the size of our entire G.D.P without the legacy of development of the British Raj, which we could not even properly capitalize.

The British at the very least showed the Indians how to unite and fight as one against one single entity, the British Empire. United we stood back then and post independence we lost track of unison and got involved in the religion conundrum. Maybe we Indians need a Dictator to get everyone to toe the line of Unity. Maybe the religion hatred we fed ourselves on and turned ourselves into bloody killers could have been avoided if we had a Dictator.

Maybe, the politicians who suck on the poor people’s grant and subsidies like leeches would not have been there. Maybe, the Indians would have still be serving the Goras with all humility and honesty but could not have dared to steal from them as people now do for the fear of whips and lashes on the word of the commander and not on the broken judicial system, which is taken for granted.

Maybe the people who are still riding horses on Hill Stations carrying the kids to and fro for a jolly ride would have been riding the goras on their Horse Backs but they would have been better off then, than they are now. At least, the Goras would not try to bring them down to Rs 150 from Rs. 200/- with a few extra steps of the horse thrown in complimentary.

Maybe the students would have been more happy under the British Raj, at least the History Books would not have to be changed at every change in Ruling Government. But maybe they would get more exposed to the English Culture than their own native one. But who’s interested in their own culture anyways, does there even exist one? The culture of the East has completely been taken over, in terms of everything be it clothes, food, attitude, lifestyle etc.

Maybe the people who have travel bugs inside them would have been happier because post independence we have hardly discovered any new Hill Station, port or sea beaches. All the current hotspots were discovered and developed by the Goras as their summer retreats. I mean we can’t even maintain them properly as developed by the Goras, how on earth are we supposed to find, develop and then maintain a new locale.

Maybe the Lawyer’s would have been more happy under the Gora legislators, then our own. Today’s legislators cannot even draft a simple Act and sustain it for more than 20 years, just when a lawyer think he has a grip on a certain legislation, bang! it goes down the drain because suddenly the Legislators think ‘Keeping in view of the recent developments the Act is replaced with a new better, improvised version’, which is nothing but a verbatim copy of the previous Act with few minor cosmetic changes, here and there, while Indian Penal Code, The Contract Act, Sales of Goods Act and mostly all the pre-independence act has stood strong with the change in dynamics and holds good even in today’s time. The foresightedness with which they were drafted is commendable.

Maybe I would not have voted by now and we would have been involved in revolutionary activities against the Goras to gain independence, but the larger question is – are we still truly independent?

As a modern independent state we have not been able to transcend the achievements of a colonial entity- British Raj. Have we been able to shed the baggage we used to carry during the times of English raj? If we look at India’s History we have always been invaded into and looted by the foreign forces and slavery has been in our blood, inherited from our fore-fathers spanning back to thousands of years, it’s just the Masters keep changing every now and then.

Editor’s note: if you do not agree to the view presented in the article then feel free to submit your opinions to us and we will publish it.

Know the Political Leanings of Supreme Court in India

The Manly Woes in India : Not all Men are Rapists

Facebook Comments
About Sanchit Garg 11 Articles
The writer is an Advocate regularly practicing in Supreme Court of India and Delhi High Court on civil, criminal and constitutional side.