So the Left student bodies have done it again and so did the BJP. In an unending cycle of chaos and tamasha, the national debate on current political issues has yet again degenerated into tamasha and propaganda.

The Left student bodies in a betrayal to their true communist ideology have managed to provoke the government and BJP has again fallen right into the trap. The offended has become the offender in JNU row. 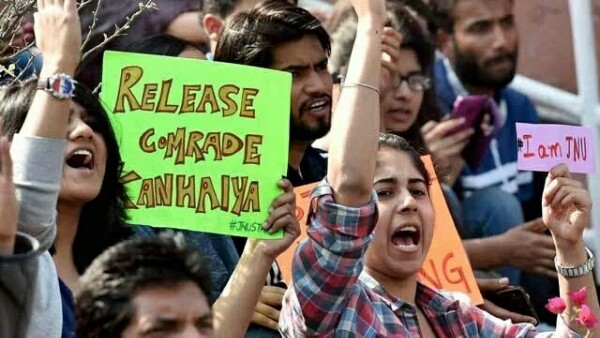 Why I call it a betrayal is because the left student bodies whose ideology has strong secular characteristics (i.e. total rejection of religion by the Marxian ideology) have tried to provoke and deride the government by shouting anti national slogans in support of Kashmiri separatists whose entire secessionist movement is based on religious chauvinism and extremism. The ideology of Muslim league that held the view the Muslims cannot live in a Hindu majority India is the very foundation of Kashmir Secessionist movement. They are more against the Hindus than Hindustan (India). Islamic terrorist groups like Lashkar-e-Toiba and Jaish-e-Mohammed which aims to bring Islamic rule throughout South Asia, impose jizya tax on Non-Muslims and kill the infidels who oppose them, stands in sharp contrast to secular Communist ideology. By supporting the cause of Islamic fundamentalists and shouting anti-national slogans, the left student groups have ridiculed themselves but have managed to provoke the government to take strict action. First they abuse their right to dissent/speech, provoke reaction from the authorities and then claim victimhood and protest against ‘repression’ of dissent- this seems to be the strategy being used by the anti-establishment leftist student groups.

The BJP government was indeed provoked but it could have shown some maturity and let the law enforcement agencies do their job. Instead, they reacted to the anti-national sloganeering and made some unwise and unnecessary comments. As always the BJP’s top leadership failed to rein in its anarchic fringe, which, in a public display of rage, trashed JNU students and journalists in the Patiala House court premises. This shifted the focus from the real issue of anti-national sloganeering to the much propagandized issue (or non-issue) of ‘repression’ of dissent which can be compared to blatant rabble rousing. Soon the so called leftist ‘intellectuals’ flooded the print media with their propaganda.

Suddenly this student ruckus (JNU Row) in favour of breaking of India is being compared to JP student movement and misguided youth like Kanhaiya Kumar is seen as a hero. They not only spread their misinformation and propaganda in India but also abroad. A leading UK Daily the Guardian published an article titled ‘India is ruled by Hindu Taliban’ in which which the writer took immense care to fill the article with sheer misinformation. Suddenly the government which is fighting the Islamic terrorists in Kashmir is the Hindu Taliban and the forces that drove half a million of Kashmiri Pandit minority from their own land, attacked the temple of democracy and carried out indiscriminate killing of innocent Hindus and Muslims in several part of the country through cowardly acts of terrorism are the persecuted victims of ‘Hindu Tyranny’. It is indeed this slandering of Hindu majority that pushes Hindu individuals to the far right.

Anti Hindu Attitude has been instrumental in creating the Hindu Fringe

A single incident of Dadri is enough to make the entire country of 1.4 billion ‘intolerant’. Post 9/11 many innocent Sikhs were shot down for wearing turban in US. Even a year back a Christian priest was observing Koran Burning Day in the US, but does this make the whole country of United States intolerant? India is a secular country and such everybody irrespective of his or her religion should be treated equally but still the vote bank politics and minority appeasement, which has been carried out throughout the history of independent India by the successive Congress central governments and some of the regional parties, still goes on. We have special laws for the minority, special minority institutions. Even a slight statement against minorities or a statement of protest against the slander of Hindu sentiments brings about the wrath of the pseudo seculars and the majority is termed as ‘Intolerant’. This anti Hindu attitude has been instrumental in creating the Hindu Fringe which will create more complication for true Indian Secularism.

The right to freedom of speech has been used many a times to denigrate Hindu traditions and national sentiments. Left student bodies like the Democratic Student Union and Democratic Student front worshipped Mahisasura instead of Goddess Durga during Navaratri, celebrated the massacre of CRPF jawans in Dantewada and even demanded beef in the Hostel mess. This type of activities is not being done by any religious parties but by the Communists. This is their tried and tested formula for provoking stern reaction from the authorities or the Hindu groups which then can be used to portray the government as ‘intolerant’. The protest against the hanging of Convicted terrorist Afzal Guru in JNU was called by the DSU ( Democratic student Union) and Umar Khalid, the man accused of shouting Anti-National slogans like “Bharat Ki Barbadi tak, Jung rahegi, Jung rahegi”, is known to be one of its member.

JNU Row : The Abuse of Freedom Of Speech

The real cause for the entire tamasha and chaos that has resulted from the JNU row is not the government’s ‘repression’ of Dissent but the abuse of freedom of speech. When you use your right to free speech to call for the break-up of the democracy that has bestowed you with this right in the first place, then you are abusing your democratic right to freedom of speech. When you shout in support of groups that are waging war with India and have forcefully exiled 5 lakhs religious minority from their homes in Kashmir apart from killing scores of innocent Indians in terrorist attacks, then you are supporting intolerance. The state of Indian Union doesn’t have the luxury to tolerate intolerance. India is facing the brunt of Islamic terrorism from multiple fronts.Every month our brave jawans are getting martyred at the border or in some dastardly terrorist acts. In such a situation we as a nation cannot tolerate those who support the intolerance of the terrorists. The Law should run its course and the anti-national elements should be rooted out but not through mob justice but through legal means.