In Siya Ke Ram serial, an agitated Dashrath blamed Kaikeyi and compared the Rani to her mother. He mentioned that she (Kaikeyi) turned out to be exactly like her mother – selfish and mean. 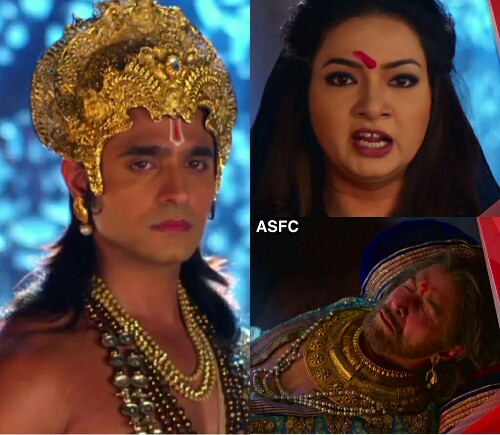 Kaikeyi was sister to seven brothers and only daughter  of the king Ashwapati of Kekaya. Before, she could realize things, her mother was already abandoned by her father. Well, she was sent to exile by her father, the king of Kekaya. The reason being, he thought her nature and behavior is not at all good for a happy family life. The name of Kaikeyi’s mother is not known.

Why was the Queen Sent to Exile By Her Husband King Ashwapati?

The King of Kekaya was granted a boon that he could understand the language of the birds and animals. However, there was a caveat attached to it. If he revealed the conversation of birds and animsls to anybody, he would lose his life and would die instantly.

One day, he and his wife were strolling across the Palace gardens. This is when he heard the talks of two mating swans. The conversation was so interesting that it amused the king and he laughed out heartingly. This made the Queen curious so.much that despite knowing the warning, she insisted the king to reveal the reason of the King’s laugh.

This made King Ashwapati realize that his wife didn’t care much about his well-being or life. Next, he banished her forever and sent the Queen to her parent’s home.

Now that, Kaikeyi repeated exactly the same thing by not caring for her husband’s life, he compares her to the Queen if Ashwapati i.e. her mother.

After Kaikeyi’s mother was sent in exile, she never saw her again. Next, she was raised by her daasi Manthara who in a way was capable in harboring her thinking into her. Perhaps this is the reason why the Queen of Ayodha distrusted men including her husband. She was also insecure about her position in Ayodhya as she was not the first but second queen of Maharaj Dashrath.

The Real Reason Why Kaikeyi Asked 14 Years Vanvas for Ram!

Know All About Urmila – Sita’s Sister and Lakshman’s Wife in Ramayana!