If you are a guy you would have connected so very well with Luv Ranjan’s Pyar Ka Punchama and Pyar Ka Punchnama 2 much to the dismay of your girlfriend. Courtesy this –

However, while you wait for other installments of the film, let me tell you that Luv Ranjan yet again has a package full of BROMANCE with three kamina friends, their unsanskari thoughts and a lot of bac*hodi. Sample this – 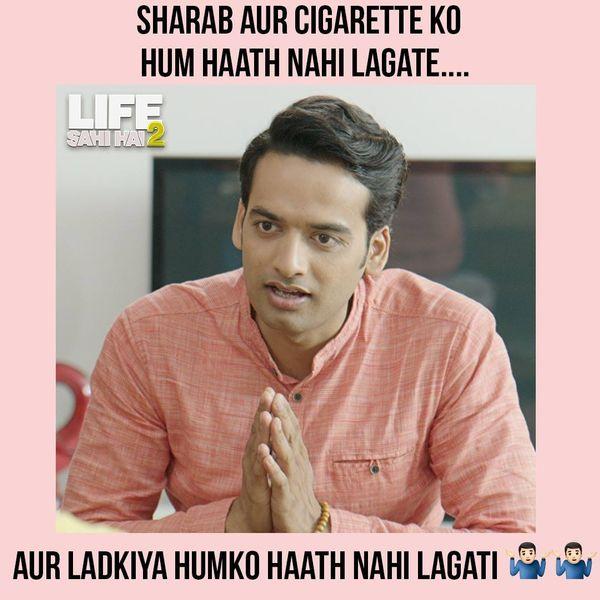 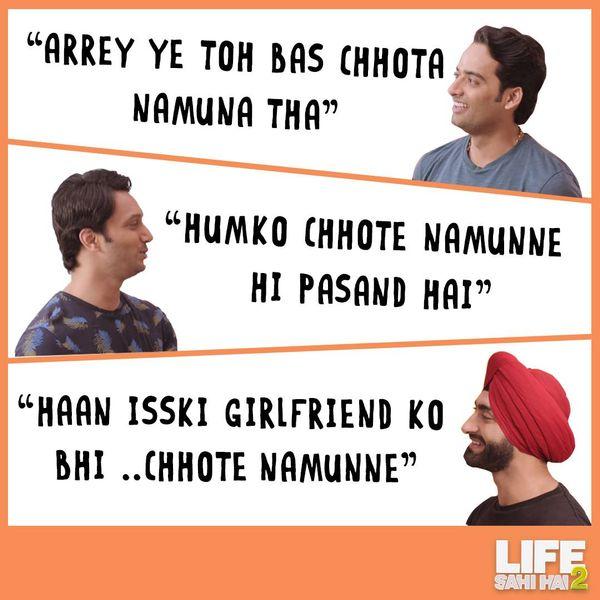 Yes, that’s the three Bac*hods on Life Sahi Hai 2 – A Hindi web series on ZEE5, an app that is gradually filling up with a lot of youth-oriented original shows, unlike ZEE Entertainment that is widely known for its drama and soap operas.

Amit Jain (Tarun Jain) – An MBA who has a stable job and a girlfriend. 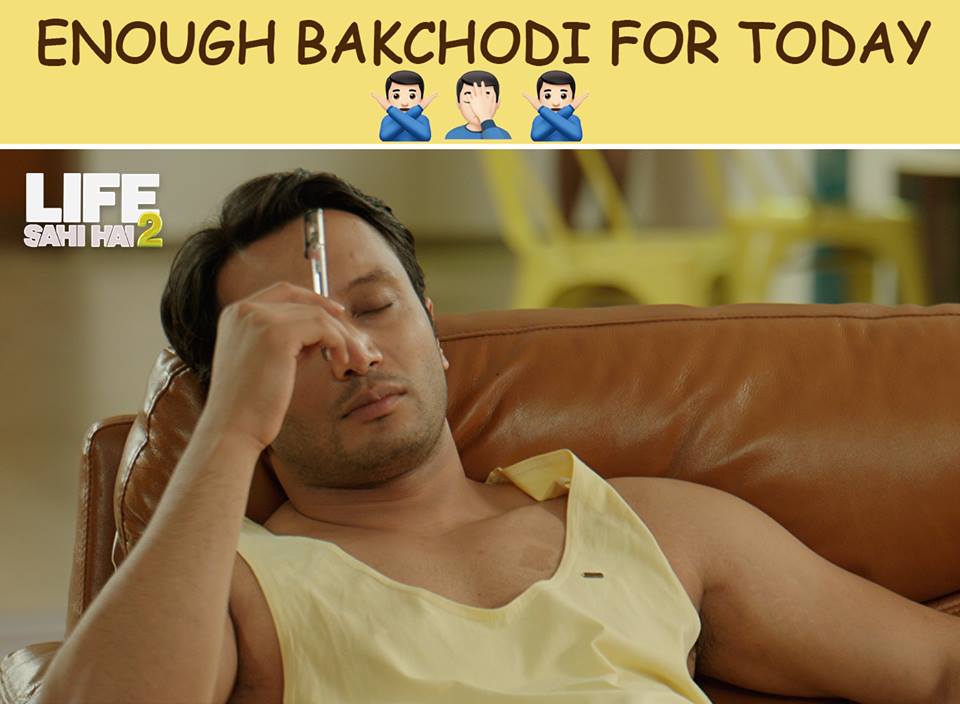 Jasjit Singh (Suhail Nayyar) – A complete bad boy whose sole motivation in life is to drink and date girls. 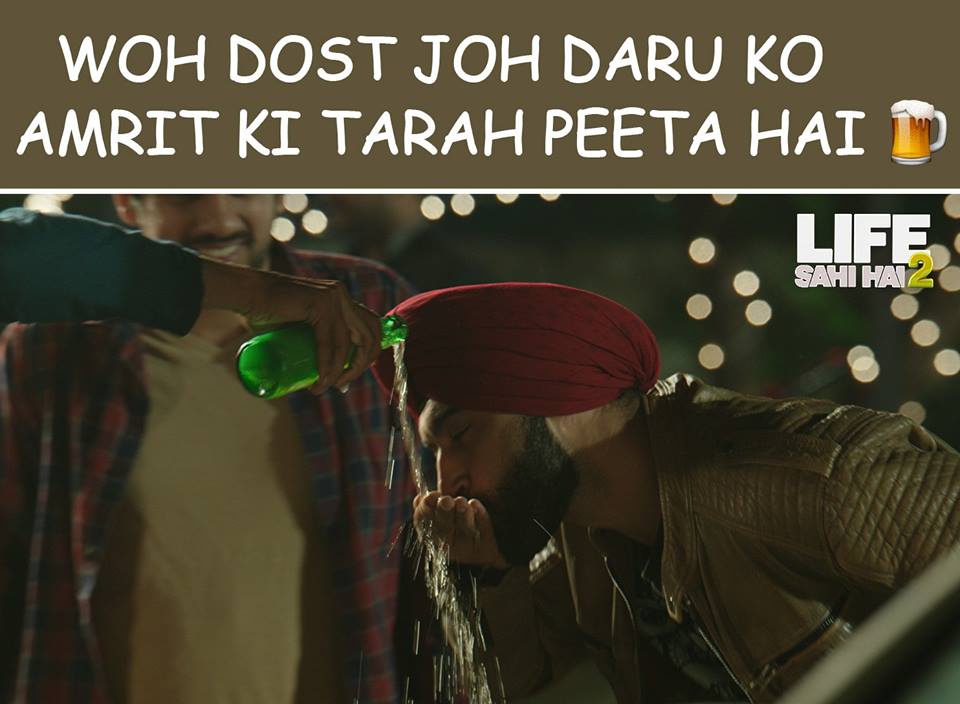 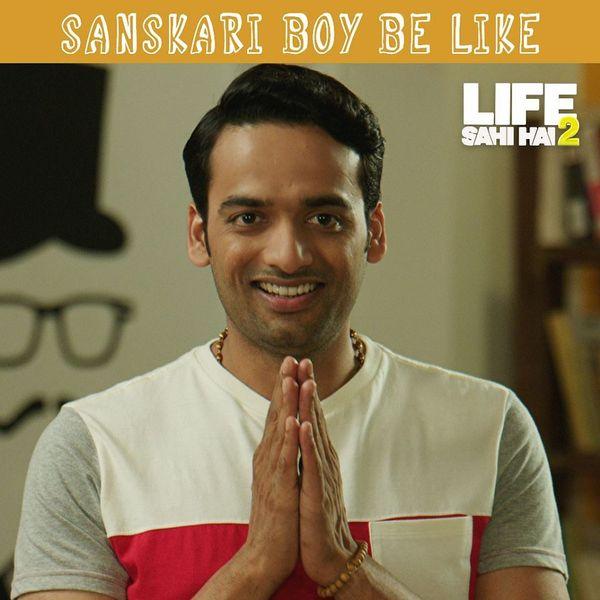 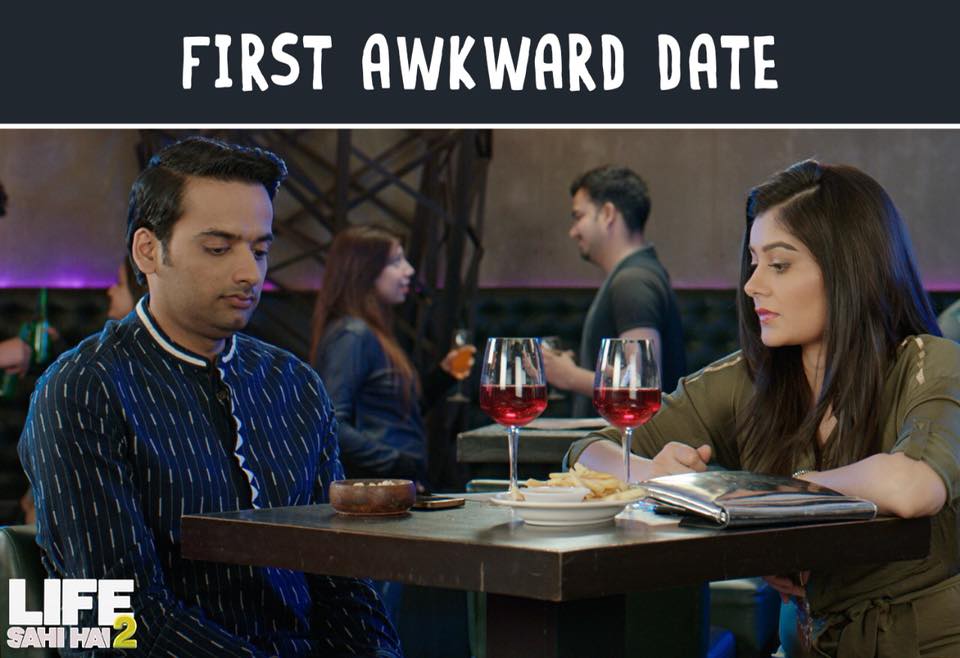 Although Vaibhav joins the boys to keep them out of trouble, the Banaras ka pundit soon joins the two in often creating more trouble than them. Interestingly, the boys find themselves in trouble – the only thing they are so capable of! 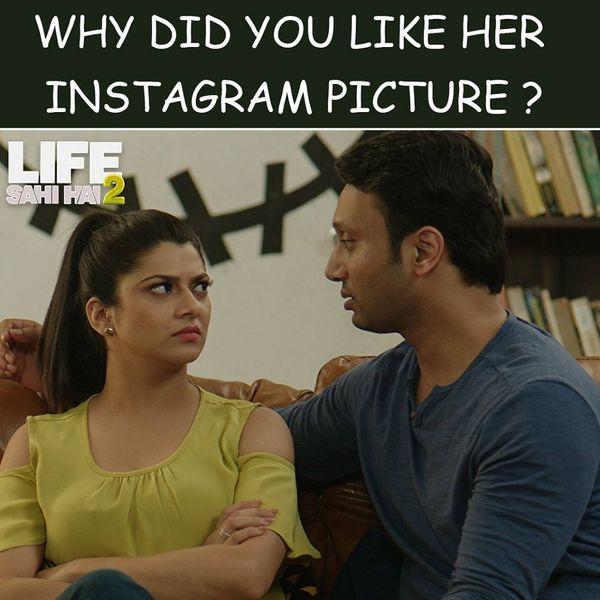 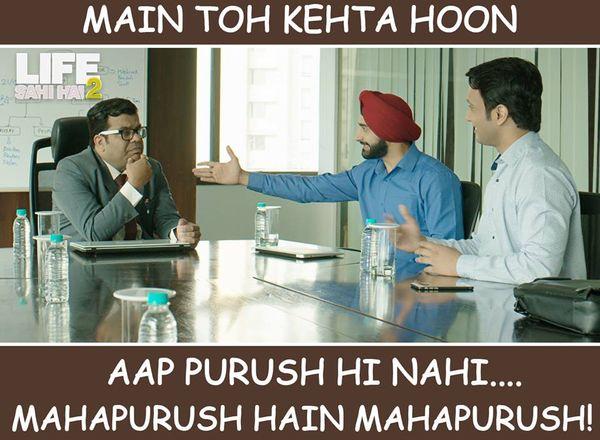 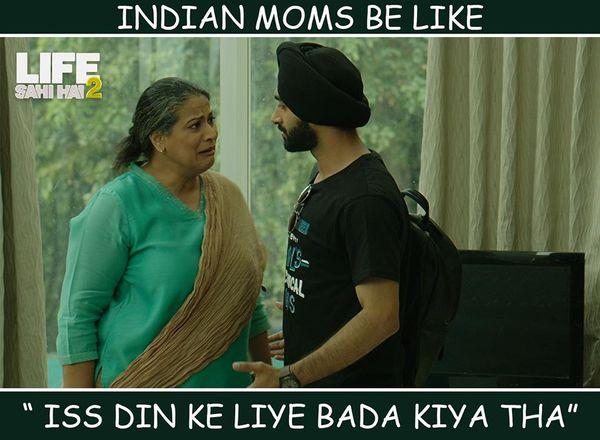 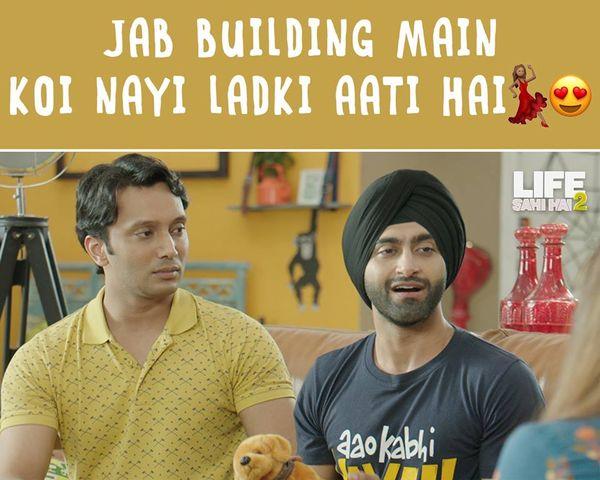 Interestingly, they get in and out of sticky situations, laughing their way throughout and still believing that Life Sahi Hai while giving us “Bakchodi ka naya address”! 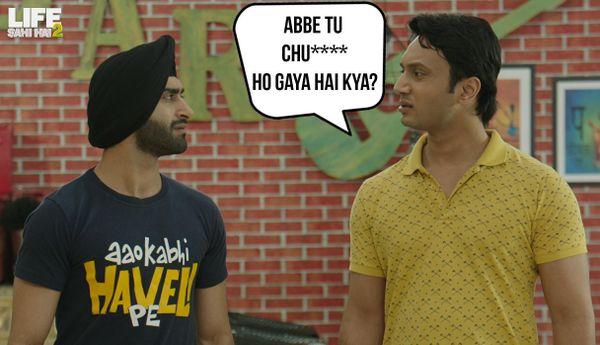 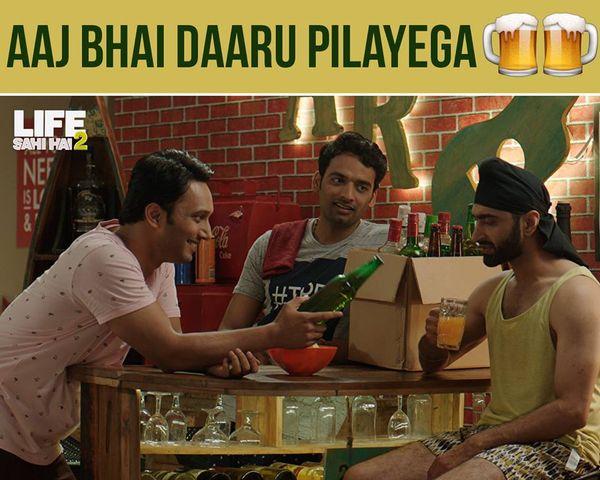 When the story is about three guys living in a bachelor pad, it is quite intriguing taken into consideration the fun quotient! And now that Jasjit and Vaibhav are in quest of a girl to fulfill their desires, their expedition and hunt is one roller coaster ride of fun, laughter, and chaos. One cannot stop but roll over the floor seeing how their chase turns out to be – whether in a sharing cab or in a supermarket… 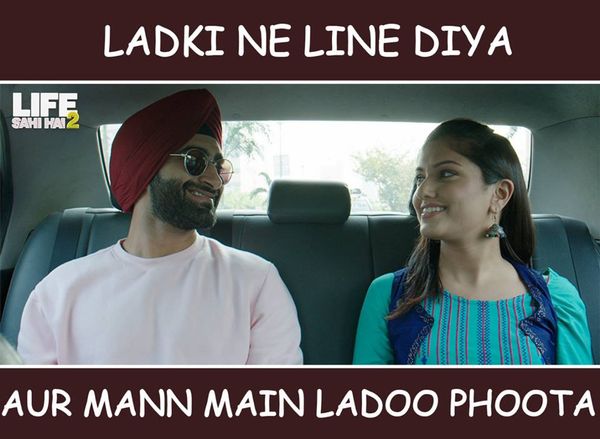 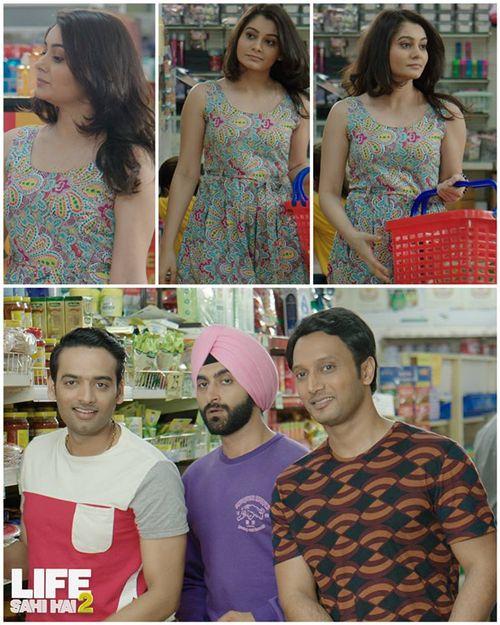 Of course, it does remind us of our friend’s crushes, blind dates, and turns out to be quite nostalgic! After all, we all had that one friend who would do anything to patao any girl he put his eyes on!

The Witty Dialogues and One-Liners!

One of the best things about watching a web series in Hindi is you instantly get connected with all the cuss words that further makes the show all the more interesting as Zee5 rightly brings to our notice – ‘Apni Bhasha Mai Feel Hai!’ From the one-liners to the pickup lines, whatever the guys burp it out is worth remembering so that you can say it out later either amongst your guy gang or in your office with your colleagues. Yes, the characters are not only apt in dram-e-baazi but also in dialogue-baazi. Sample this – 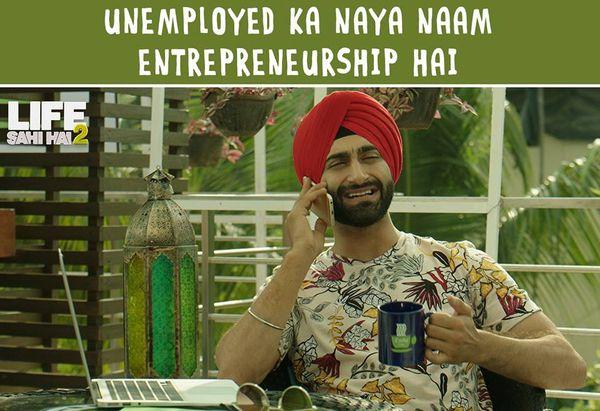 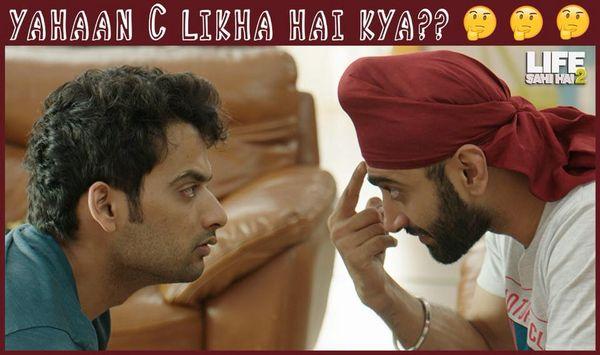 If you feel men are victims and end up looking like a c**t*ya all because of the emotional atyachar of women in their life, be it, girlfriend or wife, Life Sahi Hai 2 is your rescue button with it’s gyaan on how to patao a girl and keep her with you forever. No, these tips wouldn’t make you end up with a tight slap though! Well, the show has been quite gender sensitive, trying it’s best not to offend any girl, let alone your girl. 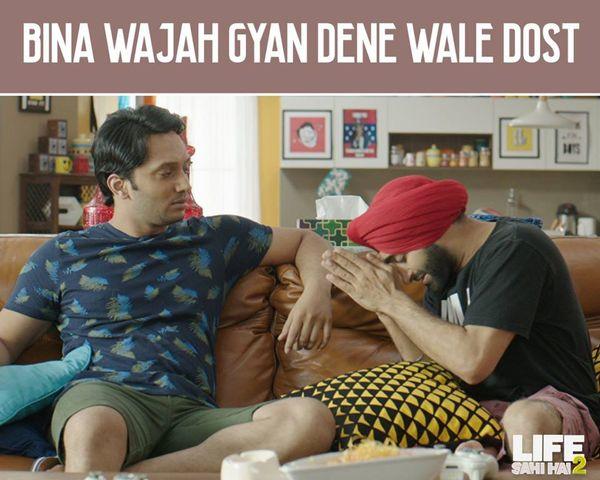 The web series is made by the makers of Pyar Ka Punchama, which is widely termed as a sexist film by several women. However,  Life Sahi Hai 2 tries to dish out something less misogynistic. There’s nothing offensive that will roll your eyes or objectify the women in any way. In fact, the female characters in the show too join in the fun which makes it a girlfriend friendly web series. Yes, you can watch it with your girlfriend too provided you know what can offend her of course!

The best part of the web-series especially the season 2 is that it does promise wholesome entertainment to men but then not at the expense of certain body parts of women or by using them as sex objects or by shamelessly selling cheap and vulgar content under the pretext of cool and hippy. This one is a better brand of comedy and its humor has a lot of other stuff than throwing all the focus on a female character’s breasts. 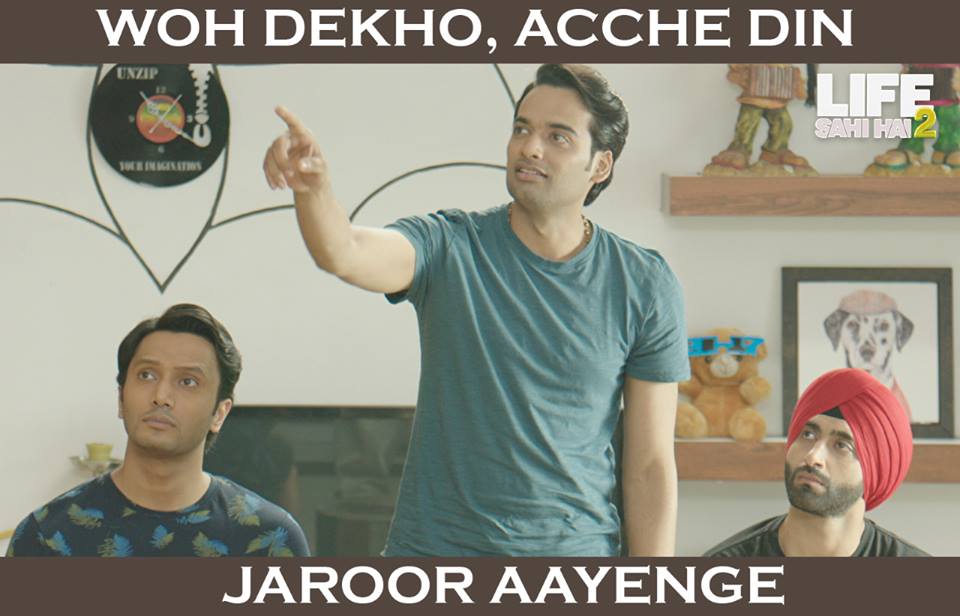 Not to Forget the BROMANCE!

BROMANCE is slowly substituting Maa ka Pyaar and with this comic series, you’ll once again fall for Bromance as the bro code takes another flight. 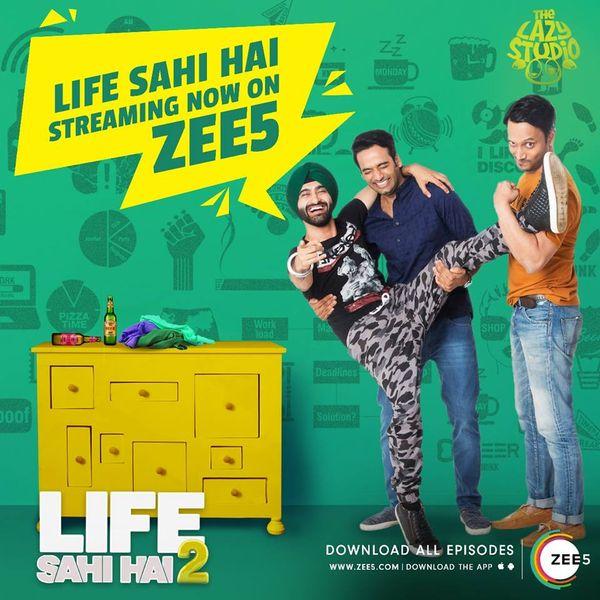 Wondering where can you get hold of all the bac^hodi that isn’t offensive? Aha, catch them all on Zee5 app. You can download the app on your Android and iPhones and stream all the episodes of Life Sahi Hai 2. Interestingly, the Zee5 app has a collection of youth-oriented original web-series that you can stream and download too.

Facebook Comments
About Deepti Verma 271 Articles
Deepti Verma is a Political/Social Writer with an opinion on almost everything! Follow @universal_rover