Rape basically means sexual intercourse without the consensus of either party. Marital Rape means a Husband forces himself on his wife without her consent. Section 375 IPC ( as amended after the brutal Delhi Rape case ) defines rape as having sex or forcing oneself over the other ( penetrative and oral sex, both are covered). But Section 375 IPC specifically says sexual intercourse between a husband and his wife doesn’t amounts to rape. 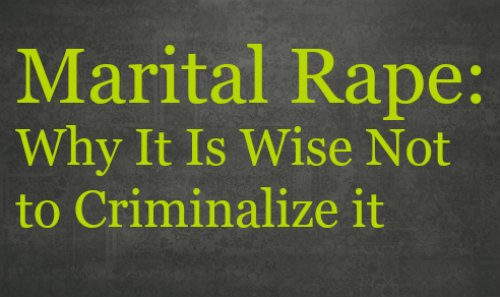 However, a rape is a rape, be it committed by any person, irrespective of his relation with the women.

The comments by a sitting Union Minister that marital rapes cannot be criminalized in our country because of illiteracy, poverty, social myriads etc is a farce and uncalled for.

U.S.A did criminalize marital rapes in 1970’s, most European countries have done so, countries such as Bolivia and Turkey, being the latest entrants to this list. It is a weak argument that just because so and so country have done it, so should we. Going by this logic, Netherlands has legalized prostitution and marijuana, then, so should we.

If a wife feels that her husband has wronged her and violated her, then who is stopping her to prosecute her husband under domestic violence laws though the quantum of sentence maybe less but it’s high time that the criminal justice system moves from punitive punishment to reformative & educative measures.

Even if we criminalize rapes, unlike normal criminal cases, marital rapes will be the most difficult cases to prove the alleged charges. It will be the word of the wife against the word of the husband. Naturally, there will be no eye witnesses or even medical proof of the same. The factum of sex between the two can never be denied, the semen samples or the pubic hair or the factum of any other medico-legal evidence can be naturally inferred to. Even, if the wife pleads injury to her private parts, the defence can attribute it to a wild intimate night.

In my opinion, the prosecution of marital rapes will be the most difficult of cases to prove and most of them will end in an acquittal. The prospects of Marital Rapes being used as a sword by disgruntled wives are also quite likely happen. The fate of section 498-A IPC ( Cruelty towards women ) is well known, if marital rape, per se, is criminalized, it will be a bigger threat and will have draconian implications. Most marital discord ends in a severe egoistic battle when the husband or his relatives have seen the inside of a Jail on a complaint made by wife. All possibilities of a truce, then fades away.

The fate of section 498-A IPC ( Cruelty towards women ) is well known, if marital rape, per se, is criminalized, it will be a bigger threat and will have draconian implications. Most marital discord ends in a severe egoistic battle when the husband or his relatives have seen the inside of a Jail on a complaint made by wife. All possibilities of a truce, then fades away.

Codifying marital rape will create more problems than solving it. It is a natural fact that only those women who will be separated from their husband’s will file such a case. How can u live a happy married life with a person who you are prosecuting for rape and want to see him behind the bars ?

Sir Mathew Hale, the then Chief Justice in England, during the 1600s has said thus : –

“The husband cannot be guilty of a rape committed by himself upon his lawful wife, for by their mutual matrimonial consent and contract, the wife hath given herself in kind unto the husband, whom she cannot retract.”

Indian society has also followed the above said concept for ages but it no longer holds good now and has definitely become redundant with the evolvement of society and education of both the sexes.

Marital rapes, Domestic Violence, Female Infanticide, and Dowry Deaths are a harsh reality; there are laws against all of it. The will of the women and of the men in terms of sexual consent should be given paramount importance; marriage doesn’t mean you own the other person. The relationship is sacrosanct but not wild or entitles either person to wield ownership rights over the other.

It is my earnest request to all those canvassing for marital rapes be criminalized, please, let the law remain as it is. Law is already very complex, don’t complicate it further and create problems for the whole of society. For Matters between Man and Wife it is best to sort them out inside their own house rather than in the house of Law.

Facebook Comments
About Sanchit Garg 11 Articles
The writer is an Advocate regularly practicing in Supreme Court of India and Delhi High Court on civil, criminal and constitutional side.