Any mention of the name Narendra Modi evokes extreme reactions. To some, he is a messiah who will lift India out from all its ailments. To others, he is an authoritarian fascist dictator. There are hardly any balanced take on our 15th Prime Minister.This is because of intense propaganda, both anti and pro Modi, that were widely promulgated in India and abroad. A man cannot be judged by propaganda but by facts. Facts are the results of one’s actions and choices. 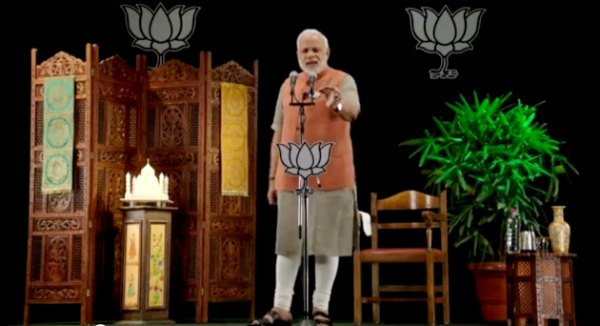 A man’s action is influenced by his character and his character is moulded by his life experiences. As such it is imperative to know about the life of Narendra Modi, before we form our own opinions on him.

Let’s rewind a bit and delve deeper into Narendra Modi’s past, especially from his entry into politics to the controversial Gujarat riots.

Narendra Modi was born hardly 110 km from the Chief Ministerial Residence in Gandhinagar but the distance he covered from being a tea seller to ultimately becoming the Chief Minister of Gujarat is awe inspiring. His political journey started after the end of emergency. The RSS was busy in reorganising itself from an underground organisation of the emergency years to a legitimate socio-political organisation in the post-emergency era. Modi’s hard work during the emergency period was rewarded with the post of ‘sambhaag pracharak’ or regional organiser. The post demanded near constant travelling throughout the south and central regions of Gujarat. Modi was also summoned to Delhi and given the task of writing book on the RSS activities during the emergency period. This new job entailed further travelling but in this case it was not merely limited to Gujarat but the whole of India and Narendra Modi relished it.

It was the year 1980 and Narendra Modi was a witness to the complete breakdown of the Janata Dal government. In the 1980 Election the Janata Dal only managed to win one seat in the whole of Gujarat. The Indian political landscape was totally dominated by the socialist left. The swatantra Party had long demised. India became a stronghold of socialism with a blind belief in ‘infallible’ socialist maxims which our country had inherited from foreign Cambridge and London School of Economics educated national leaders. Socialism became India’s ideology. During the emergency a clause relating to socialism was added to our constitution by Indira Gandhi, this would be later amended by the Rajiv Gandhi’s Government. So we Indians became constitutionally bound to be socialists.

The breakup of Morarji Desai government and sheer scale of defeat that Janata Dal faced in the 1980 election taught Modi the importance of ‘being practical’ over ‘ being ideological’ in Indian politics. In RSS debates, he became quite a rebel, who supported economic reforms over ideological discipline and stressed for development rather than religion. It was his unorthodox attitude that would cause the rift between him and Pravin Togadia of Vishwa Hindu Parishad. During the drought of 1985 and 86 in Gujarat, Narendra Modi and his innovative measures played a pivotal role in the successful relief work done by the RSS.

Image Courtesy: By Bhayavadar (Own work)  via Wikimedia Commons

By this time the Bharatiya Jan Shakti reinvented themselves into Bharatiya Janata Party and offered a new right of centre alternative but free market economy remained a taboo in Indian politics. This party would after 20 years form a national government in India but still in 1980 it remained at its nascent stage.

The 1980s was a decade of great turmoil and upheaval in India. There were armed insurgencies waging in Punjab and in the North East, riots on reservation, assassination of Indira Gandhi and the killings of innocent Sikhs. Even in the state of Jammu and Kashmir a foreign backed insurgency was brewing and the situation deteriorated so much in the early 1990s, that even the Indian Tricolour could not be hoisted at Lal Chowk in Srinagar. It was during this tumultuous period that Narendra Modi was deputed to BJP and started taking active part in the workings of the Bharatiya Janata Party. It was his entry into politics.

He played an important part in organising the Yatra that started from KanyaKumari in the south to the Lal Chowk in Srinagar, Kashmir.The yatra ended in Srinagar when the tricolour was hoisted in Lal Chowk. The yatra cemented his position in BJP as a hardworking and talented man with special organizational skill. Later that year Narendra Modi was elected National Secretary of the BJP, and was summoned to New Delhi where he was assigned responsibility for the party’s activities in Haryana and Himachal Pradesh.

While in Gujarat the defection of Vaghela to Indian National Congress caused quite a stir in state BJP hierarchy. There emerged factional politics within the state BJP and it was Modi himself who united the fighting factions inside BJP. He supported the Keshubhai Patel and BJP fought as a cohesive unit in the 1998 elections. The BJP won the majority of seats and Keshubhai Patel became the Chief Minister of Gujarat. In 2001 against the backdrop of large scale destruction due to the Bhuj Earthquake and allegations of corruption, BJP fared poorly in the by-elections. This caused concern in the central leadership of BJP and it was decided to make Modi the Chief Minister.

The Godhra riots have been the most controversial aspect of Narendra Modi’s life. It was on 27th February 2002 barely two days after Modi formed his government, that 59 people mostly Hindu karsevaks were burned alive inside the Sabarmati express near Godhra railway station. The carnage started when More than 2000 Muslims from the surrounding area had surrounded the train and started pelting stones. When the passengers tried to save themselves by blocking the broken windows with their suitcases, the mob started throwing electricity bulbs filled with acid.The railway coach S6 was then alighted and pilgrims trapped in the coach burned to a horrific death. According to one report a man who successfully came out of the coach was beheaded and his head thrown into the burning coach.

That very morning in Godhra, when the fire fighters reported to their office, they found their tenders were not functional. One tender’s cluth plate was removed a few days back and another tender’s hose was not working due to a missing nut. After repairing their tenders, when the firefighters reached the area they were surrounded by angry crowd which didn’t let them proceed to Godhra Railway station. The crowd was headed by a Congress member of the Godhra Nagarpalika, Mr Haji Bilal and he was also chairman of the Vehicle Committee. He was later reported to have visited the Fire station in the few days preceding the Godhra riots. When after 20 minutes the fire tenders finally managed to reach Godhra railway station they found only burnt bodies. There were 25 women and 15 children among the dead.

On that morning, Narendra Modi had no clue of the murder of 59 people in Godhra. He was busy preparing for the assembly session as the budget was to be presented on that very day. It was in the mid morning that he started receiving unconfirmed reports of a railway incident at Godhra. He let the finance minister finish the Budget speech, which was a statutory requirement and as  such was mandatory. He acted quickly and made his way to Godhra. It was 2 pm when he got the exact news of the massacre. He issued a state-wide alert to law enforcement agencies, cancelling leave and all the reserves were activated.

His first statement to the press after visiting the site at Godhra was ‘This inhuman terrorist crime of collective/mass violence is not an incident of communal violence.’ He refused to see it in a communal angle. He declared curfew in at least 28 cities and in next 24 hours almost the whole of urban areas of Gujarat was under curfew. As a precaution 217 preventive arrests were made and 137 Hindu and 80 Muslim potential trouble makers were in confinement.

The VHP and Bajrang Dal were not in good terms with Narendra Modi, who was seen as not conforming to their narrow version of ‘Hindutva’. Sensing trouble, Narendra Modi immediately requested to the Central government  for four companies of the Rapid Action Force (RAF), along with ten companies of Central paramilitary forces (CPMF).On top of that the Entire strength of the Ahmedabad police was deployed throughout the city and fifty-eight companies of Gujarat’s State Reserve Police Force (SRPF) and four CPMF companies were called in. It is also reported by a leading newspaper that Modi ‘frantically’ called for army units but all the armed units were deployed to the border during the operation parakram. All this happened within 24 hours of Godhra massacre. By the time Narendra Modi reached his chief Ministerial residence it was very late at night. ….continued here

Narendra Modi : Facts From Godhra and Beyond – Part 2

Narendra Modi – Facts From His Life as a Wanderer