During oppressed times, “speaking one’s mind” was a sure way of having one’s head chopped off (quite literally). Camouflaged in enough nonsense to shield the singer from being executed on account of treason, rhymes were thus cleverly crafted and sung around to parody religious and political figures and events of their time which could be anything from scandal, to gossip or aspects of daily life. 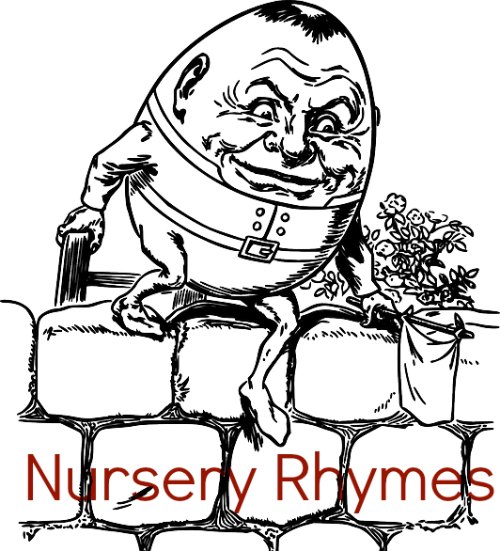 So if you pay close attention to the lyrics you sang “oh so sweetly” as a wee child while scampering across the playground, the darkness etched in its layers will soon manifest itself in ugly undertones.

Towards the end of the 18th and early 19th century, the disturbing content of nursery rhymes was ‘polished’ to suit young audiences.

And just as every rhyme has a historical link, let’s take a quick look at the origins of the popular ones.

While no one knows who or what Humpty Dumpty really was, this rhyme came to the spotlight through Lewis Carroll’s book , ‘Alice Through the Looking Glass’ (1870) where Humpty Dumpty was depicted as an egg. However, this old rhyme goes way back in time to the 15th century. During this period, Humpty Dumpty was a colloquial term used to describe obese or large people.

The Oxford English Dictionary also suggests that the term ‘Humpty Dumpty’ was first used in the 17th century to describe brandy boiled with ale. During the 1700’s it was also used to denote a short, uncoordinated person as well as one who drank too much of alcohol.

This gave rise to speculation and inaccurate theories surrounding the identity of Humpty Dumpty.

But if you go by what several historians believed, Humpty was in fact the nickname of a large cannon used in the English Civil war (1642-1649), during the Siege of Colchester where Royalists (as they were called) wished for King Charles I to rule the country without Parliament. Thus Colchester was laid to siege by the Roundheads (Parliamentarians).

As history dictates a large cannon named ‘Humpty Dumpty’ was strategically placed on the wall next to St Mary’s Church and fired by ‘One-Eyed Jack Thompson on June 15th 1648.

A shot from the Roundheads’ cannon destroyed the wall underneath Humpty Dumpty which caused it to tumble to the ground. Unfortunately for the Royalists, “all the King’s horses and all the King’s men” could not succeed in raising Humpty to another part of the wall due to its weight.

Thus after 11 gruelling weeks, Colchester was taken over by the Parliamentarians and King Charles I was toppled, thus ending the war.

While this makes for a great story, there are other versions that hypothesize that it could have been King Richard III. However, this theory has a lot of holes and thus the Siege of Colchester would be a better fit.

Jack and Jill – The French Connection

Jack and Jill went up the hill to fetch a pail of water.

Jack fell down and broke his crown, And Jill came tumbling after.

Even though several theories have been postulated to determine the roots of the rhyme “Jack and Jill” (also known as “Jack and Gill” in earlier versions) the true origins remain unclear.

But as popular theories go, the biggest contender of them all can be awarded to King Louis XVI and his Queen Marie Antoinette. As a result of the French Revolution, King Louis XVI (16th) was stripped off his titles and beheaded (“lost

his crown”); his wife Queen Marie Antoinette was also subjected to the same dreadful fate (“And Jill came tumbling after”).

While this may make sense, one may puzzle over the fact that “Jack and Jill” was written much before the above events occurred.

Another likely theory suggests that it is tied to King Charles I who tried to reform the tax on liquid measures. When Parliament vetoed against it, King Charles I made sure that the volume of a Jack (1/2 pint) and Gill (1/4 pint) were lowered, while the tax stayed the same. Hence “Jack fell down and broke his crown” and “Jill came tumbling after”.

There is yet another belief that the rhyme has its roots in the village of Kilmersdon, Somerset. It is said that in 1697 two unwed sweethearts courted upon a hill away from prying eyes which led Jill’s pregnancy. Thus – “to fetch a pale of water”. Just before childbirth, Jack “fell down and broke his crown” (he fell and hit his head on rock, with death meeting him on the other side) and days later “Jill came tumbling after”, dying in childbirth.

Baa baa black sheep, have you any wool? Yes sir, yes sir, three bags full! One for the master, one for the dame And one for the little boy who lives down the lane.

(The last line used to read as “”But none for the little boy who cries in the lane”).

This ditty is not about cute fluffy sheep or little lads but about the tax imposed during the 13th century by the Plantagenet King Edward I (the Master) thus causing a lot of misery to poor shepherd folk.

When the tax on wool was introduced in 1275, one third of the price of a sack of wool went to the Crown (King), another portion went to the church/nobility, and the rest went to the hard working peasant who was left with meagre portions.

Also, black sheep were considered bad luck as the fleece could not be dyed and hence was deemed worthless.

So there you go! Yet another rhyme laced in doom.

Ring A Ring A Roses / Ring Around the Rosie

We all fall down

Doesn’t it remind you of playful children dancing in a circle? But the lyrics of this sweet rhyme have often been tied to the Great Plague of London in 1665 or much before, when the first outbreak of plague scorched England in the 1300’s.

It has been alleged that the ‘Rosy Rash’ was a symptom of the plague and “posies” of sweet smelling herbs were carried around due to the belief that the disease was spread through bad smell. And we also have the “Ashes, Ashes!” that are the remnants of cremated dead bodies. Other versions having “A-tishoo! Atishoo!” in their lyrics was tied to violent sneezing, another sign of the plague.

While all of this sounds dreadful, many folklorists rubbish the idea. After all, the rhyme was published 200 hundred years after the plague had erupted and even longer since the Black Death of the 1300’s. The supposed ‘rosy rash’ was found only in extreme cases of the illness. Besides, the explanation about the plague surfaced during the mid-20th century.

The European and 19th- century forms of the rhyme suggest that the “fall” could have been metaphorical, like a curtsy or other form of bending gestures that was commonly seen in dramatic singing games.

Mary, Mary, quite contrary, how does your garden grow? With silver bells and cockleshells and pretty maids all in a row.

At first glance this seemly innocent popular English rhyme may have you picturing an angel’s sanctum. With all those lovely twinkly silver bells, cockleshells and pretty maidens in a row, who would have thought otherwise? But this rhyme has murderous undertones.

If you haven’t’ guessed already, this rhyme describes Mary I (known as Bloody Mary), the daughter of King Henry VIII during her reign as Queen from 1553 to 1558. As a staunch Catholic, her rule was distinguished with the slaying of hundreds of Protestants for not converting to Catholicism.

The line “How does your garden grow” has nothing to do with gardening as one might think but that of the ever expanding graveyards that began to sprout on account of several executions.

“Silver bells” and “cockleshells” were torture devices used during this period of time. While the former device crushed victim’s thumbs, the latter device was used on one’s private parts. “Maids” represent “the maiden” a device used for beheading.

Not a song I’d be humming even in my sleep. Don’t you think?

Once again, this rhyme is believed to be in reference to the blinding and execution of three Protestant Bishops who were convicted of plotting against Queen Mary I a.k.a Bloody Mary. But in actuality, the Oxford Martyrs – Cranmer, Latimer and Ridley were cruelly burned at the stake, not blinded as the ditty suggests. However, if you take into consideration the mice’s “blindness”, it could be woven by Crypto-Catholics to describe Protestantism.

So there you have it! I may have concluded the piece with 6 rhymes, but if you have an inclination to finding answers to several other ditties out there, be my guest.