Ever since India conducted its first nuclear test in 1974 as deterrent against China – Pakistan and demonstrated its nuclear capability in Pokhran, the Central Intelligence Agency (CIA) kept a close eye on the site, monitoring continuously. It was to stop India from further developing its nuclear programme.

It was CIA’s satellite image that stopped PV Narsimha Rao from nuclear tests in 1995. Well, US Ambassador Frank Wisner not only confronted India with those images showing activities in Pokhran but also warned him of harsh economic sanctions. Next, the then US President, Mr. Bill Clinton personally talked to PM Rao and asked him to drop the idea of testing altogether.

Despite all these warnings and dire consequences, 3 years later, on the day of Buddha Poornima, May 11, 1998, much to the CIA and world’s surprise, India, successfully carried out its nuclear tests (Operation Shakti) in Pokhran and registered itself as the world’s sixth superpower. Interestingly, the CIA got to know about Pokhran Nuclear tests only after India’s Prime Minister Atal Bihari Vajpayee announced to Indians and the world that, ‘India is now a nuclear power state.’

How CIA Failed to Identify the Pokhran Nuclear Tests?

After the 1995 warning, the Pokhran site was under strict surveillance of the CIA where their four powerful and technically advanced spy satellite images could even capture sharp images of any object. Now, DRDO (Defence Research and Development Organization) was aware that the CIA satellites passes over same object within short timeframe, from once in a couple of days to once in two or three weeks. Knowing about the spy satellites and their functionality, the Indian team conducted the nuclear operation in such a manner that it could deceive them smartly.

The entire team knew from the 1995 experience that the CIA was watching closely and so all the activities on the site were kept so minimum that the satellites captured nothing out of the ordinary. This is the reason when the White House asked CIA for details they had none to offer. Calling the episode as a ‘colossal failure’ of the US, Sen. Richard Shelby condemned the Intelligence community’s conduct in strong terms. Besides, now that the entire operation was known to only few people in the ministry there was no chances of leaks too.

Scientists carried out activities at the test sites only when the spy satellites camera were away from the range. Interestingly, they got the army assistance too. The Indian army had a base on the site. 58 engineers were commissioned under the supervision of Col. Gopal Kaushik to prepare the test site. The army conducted dummy mount tests to study how the winds shaped up the small hills on dunes. The army engineers and scientists together worked only at night. After working, they realigned all the equipment to its original position so as to make an impression that it was never moved.

The Scientists always dressed up in army uniform at the test site and each scientist had a unique code name. The chief coordinators of the operation Dr. APJ Abdul Kalam (The Chief Scientic Advisor and chief of DRDO) was named Major General Prithvi Raj and R Chidambaram (The Director of DAE)  was given the name of Natraj. The communication too was done very secretively to avoid leakage of any information to external agencies.  “Taj Mahal”, “White House”, “Kumbhkaran” were code names for shafts that contained nuclear devices. “Canteen” was codename for chamber in the shaft. “Sierra” was code for scientist, “Charlie” was for DRDO team and “Bravo” was for BARC.

Interestingly, the Indian scientists who were engaged in test preparation would never travel together or visit direct to the test site. Also, the information related to the nuclear test was restricted only to few ministers including LK Advani, Pramod Mahajan, Yashwant Sinha and Jaswant Singh.

Even the date of the testing was decided strategically. The Indian President was visiting Latin America from 26th April to 10th May. Yes, everything was so strategically planned that even the biggest intelligence agency, the CIA failed to get even a hint of what’s happening in Pokhran much to their dismay and embarrassment.

I am not aware of any documentaries on 1998 Pokhran Nuclear tests but recently Bollywood came up with a movie PARMANU – The Story of Pokhran starring John Abraham and Diana Penty in pivotal roles. Inspired by the true events, movie brings out the entire covert mission live, bringing the story of India’s inspiration amidst struggle to establish the nation’s presence on the global nuclear map. This Independence Day, the movie will be telecasted on TV. Watch the World TV Premiere of Parmanu – The Story of Pokhran on 15th August at 12 noon only on Zee Cinema. 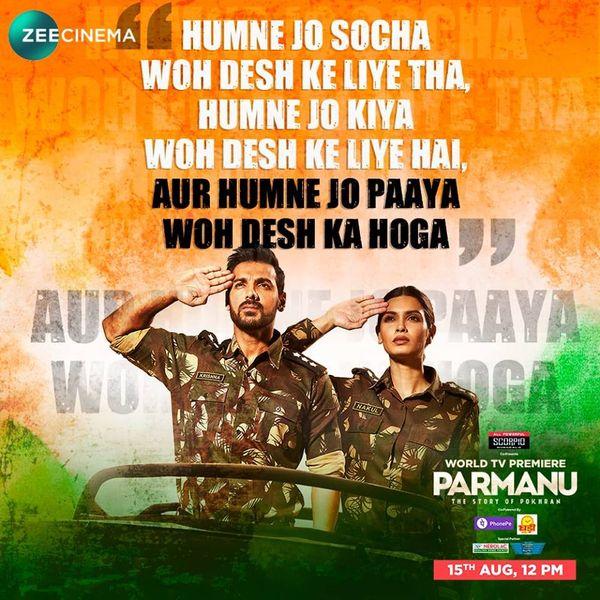