It’s time for some azaadi. Not azaadi from RSS but within RSS. Yes, RSS –  The Rashtriya Swayamsevak Sangh is finally going for a maha makeover by changing their uniform.

Surprised? No, they are not changing the color from Khaki to saffron, but they are certainly looking to replace the Khaki baggy shorts popularly known as the RSS Knickers. 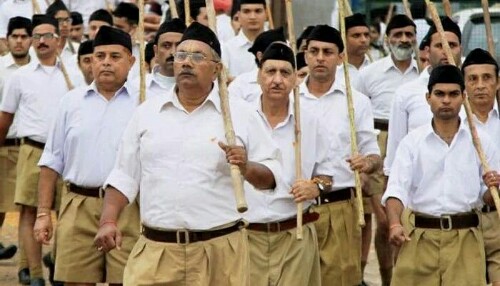 The Trademark RSS Khaki Shorts Will Be Replaced by Brown Pants

Talks and discussions are going on to replace the trademark khaki shorts of RSS. This was discussed during a meeting of ABPS – the Akhil Bharatiya Pratinidhi Sabha which is the highest decision-making body of the Sangh in Nagpur. While, the final date of implementation is still not known, the change is uniform has been declared on their official Twitter handle.

Well, the Khakhi pants will be loose fitting just like their current shorts as the loose attire helps the swayamsevaks to perform Surya namaskar and yoga.

The rest of the RSS uniform i.e. the black cap, the white shirt with one pocket on the left, canvas belt, black shoes, and the bamboo stick that goes up to the height of the swayam sevak’s ears will remain the same like before.

Why the Change in the Sangh Dress?

Well, looks like the youngsters in the Sangh are not comfortable with the baggy knickers and are highly embarassed to don them now. This has made the Sangh to think about the makeover. However, the older lot is not really content with the idea as the present khaki knickers is their symbol.Hmm, no more chaddi and knicker jokes from hereon.

The History of Change in The RSS Ganvesh

This is not the first time that RSS is making a change in its uniform (ganvesh). The last change made in the RSS uniform was 6 years ago in 2010 when the leather belt was replaced by a canvas belt. However, this has not be implemented on a full scale as many if the RSS members still wear the leather ones.

Before 2010, the RSS uniform was changed in 1935 when the khaki caps were chsnged to black caps. Next, there was an amendememt in the ganvesh 5 years later in 1940 when the khaki shirt was replaced by a white shirt. Yes, right from its inception in 1925 till 1939, the RSS uniform was an all-khaki uniform. The next, change came in 1973 when the Leather black shoes were replaced by long boots. Post that, rexine shoes were also allowed by the Sangh.

Interestingly, the all khaki dress of the Sangh in 1925 was inspired by Mahatma Gandhi and the Congress. Yes, a century ago a similar type of uniform was designed for volunteers at an annual session of the INC (Indian National Congress) in Nagpur.

Yogi Adityanath Vs Anupam Kher – The Battle of The Biggest Sanghi!