Based on my previous post about the plight of the Tamil Nadu Farmers, here are some more inputs. 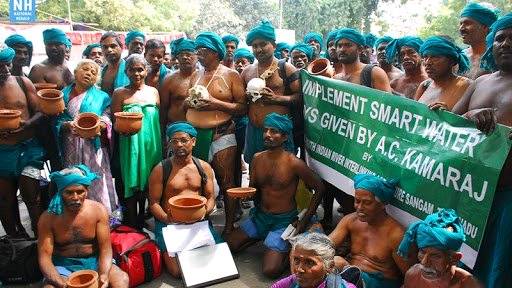 Yes, the farmers are protesting and there are numerous students trying to rally in their support.

However, the Government is cracking down against them so swiftly and efficiently that their agitation is being nipped in the bud.

From what I have heard from my friends in Tamil Nadu, there is almost an unofficial section 144 being implemented in most places where if they see people gathering together they are immediately whisked off to the Police Station with cases filed against them. Is there no “Right to Protest” in Tamil Nadu anymore?

So why are the Tamil Nadu farmers protesting in Delhi and why not against the State Government, one would ask?

Owing to this being the worst drought in 140 years for TN compounded by the Cyclone Vardah, the estimated relief package is Rs. 40,000 Crores.

While the TN State Govt has sought Rs. 30,000 Crores from the Center for this, the Center has sanctioned only Rs. 2000 Crores as drought relief.

The Center has been pretty much mum on this issue, while it was busy cheering for Yogi Adityanath promising a Rs. 36,000 Crore loan waive off for the UP farmers (which is yet to be delivered btw, so dont chest thump just yet).

The farmers are not just seeking their loans to be waived off, which will only be a short term measure but are also asking for the Government to set a fair and just price for their produce. They are also requesting the Government to come up with realistic solutions to address the water scarcity.

The delegation of farmers who went to Delhi to meet with Modi, were refused even a hearing with the man who was seen being busy taking Selfies with Malcolm Turnbull.

This is what has finally triggered the farmers to go naked on the streets.

It is deplorable to think that the farmers who lay the food on our tables have been forced to humiliate themselves in the front of the whole nation to get themselves heard.

While the smaller news agencies with limited reach and the local news channels are trying to cover this news to the best of their abilities, the mainstream media is largely busy talking about Ram Mandirs and Yogi Adityanath’s monkey business.

Do you think we can do at least this much so that someone in the top echelons of the Nation can stop taking those damn selfies and gives a hearing and a solution to those people who truly need it?

The article was first published by Darshan Mondkar on his facebook timeline.

Disclaimer: Yeah Yeah, I know taking Selfies has become an important part of our lives these days …… but so is food and so are the lives of those who produce that food !!!