Diabetes has been known as a disease in man for thousands of years. Only relatively recently has the disease been found to occur naturally in animals.

Horses, cattle, dogs, cats and monkeys are known to be affected, but it is estimated that one dog in a thousand suffers. 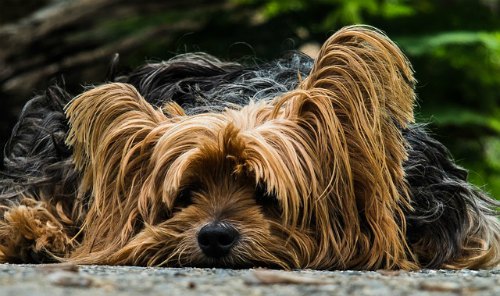 The Causes of Diabetes in Dogs

The cause of diabetes is a deficiency in the production of insulin by some special cells in the pancreatic gland. In the normal dog, insulin maintains a balance between the production of glucose from the breakdown of food and the amount circulating in the blood. Excess quantities of sugar are converted into other forms of carbohydrates and stored in the liver and muscle cells.

Where insulin levels fall below normal, the sugar levels rise in the blood. The kidney is unable to reabsorb these large quantities of glucose, and glucose molecules spill over into the urine.

In order to excrete urine of such high specific gravity, large amounts of water are required. This chain of events produces one of the first symptoms of diabetes, a markedly increased thirst.

The loss of large quantities of glucose in the urine robs the animal of the benefits of much of its food intake. To make up for this deficiency of energy derived from the carbohydrate portion of the diet, fat and protein reserves in the body are broken down. The dog’s body weight begins to fall dramatically despite an increased appetite, and this is another characteristic sign of the diabetic dog.

Some owners have suspected that sugar may be present in the urine of their pets by observing that ants have been attracted to areas of lawn or pathways where the dog normally urinates.

Some breeds of dogs seem to be more prone to diabetes. Overweight small breeds such as Dachshunds and Corgis are often affected. A sudden loss of weight accompanied by increased thirst and appetite should arouse suspicions of the presence of diabetes.

If the disease goes untreated for any length of time, complications occur which can threaten the life of the dog. The breakdown of large quantities of fat results in the accumulation of a substance in the blood called ketones. The dog begins to vomit, which brings about an imbalance of other essential substances. The continued excretion of large amounts of urine makes the dog prone to dehydration. Soon it becomes weak, refuses all food and lapses into unconsciousness.

Treatment of diabetes aims at supplying insulin in sufficient quantities to restore the correct level of blood glucose. Too much insulin can depress blood-sugar levels to a dangerous level.

To arrive at the correct balance, the dog must be admitted to hospital. The owner is shown how to give the calculated dose by injection under the dog’s skin. Great care must be taken with feeding and regular exercise is important.

The dosage of insulin might have to be adjusted from time to time, but provided the food intake can be stabilised, diabetic dogs can live a normal and healthy life if given their daily insulin injection.

Why individual dogs develop diabetes is not understood. Certainly, overweight dogs are often affected. Perhaps diabetes is a product of our modern society. The feeding of large quantities of sweet biscuits and other refined carbohydrates not only leads to obesity but may eventually exhaust the capacity of the cells of the pancreas to produce sufficient quantities of insulin.

What humans do to harm their health is not our concern, but so often the dietary indiscretions of owners are extended to their pets. Dogs should be fed like dogs and their weight controlled with a balanced diet and regular exercise.

Facebook Comments
About Natalia Moore 6 Articles
As a pet-lover/owner, health researcher and blogger, Natalia spends her time learning, discovering, and sharing useful tips on Everyday Life Tips. She also loves to read, write, and travel with her dogs!