Gul Khan and Star Plus’ latest serial Ishqbaaz is a story of three brothers – Shivaay, Omkara and Rudra who are divided by their parents but united by their strong bond. The Oberoi brothers and their grandmother is one family while their parents are always on the verge of fighting.

Courtesy the star cast of the serial, Ishqbaaz is already keeping the audience glued to the TV screens.  Here we share who plays what in the serial Ishqbaaaz: 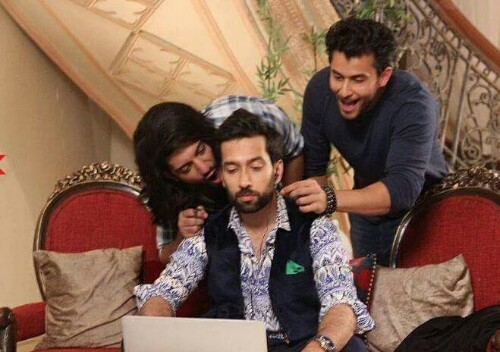 The eldest brother Shivaay Singh Oberoi is essayed by Nakuul Mehta popular for his role of Aditya in Rajshri’s Pyaar Ka Dard Hai Meetha Meetha Pyara Pyara. In the past, the actor has also hosted India’s Got Talent. In 2008, he made his Bollywood debut with Haal-e-Dil. He is a trained ballroom dancer.

He is one of the hottest guy on Ishaqbaaz. Previously, he has worked in various shows including Channel V’s “The Buddy Project” and Yeh Hai Aashiqui on Bindass TV. He was also seen in Zee TV’s Doli Armano Ki as Chiku.

The flamboyant Rudra Singh Oberoi is played by Leenesh Mattoo who was earlier seen as Anuj Birla in Star Plus’ Suhani Si Ek Ladki. Born on November 13, 1991, Leenesh like his onscreen character is a fitness freak and loves working out.

Surbhi Chandna was seen as the deaf and mute Hayaa in Qubool Hai leap and now she is essaying the lead role of Anika. Besides TV, she has done several commercial ads and was also seen in Bollywood film Bobby Jasoos with Vidya Balan.

The Parsi con girl in Ishqbaaz opposite Omkara is Vrushika Mehta prominently known for her role in Channel V’s Dil Dosti Dance.

Neha was seen in Qubool Hai as Najma – the lead actor’s sister and here she plays a Marathi mulgi. She will be seen opposite the youngest son Rudra Singh Oberoi.

Bhavya is seen opposite Rudra as his love interest. The soft spoken Bhavya aka Mansi Shrivastav was earlier seen as Shivani in Do Dil Bandhe Ek Dori Se along with other serials like Arjun, Rab Se Sohna Ishq, Peterson Hill and Sasural Simar Ka as Dr. Prerna.

A famous face on TV, Mahesh Thakur rose to fame with Zee TV’s Sailab in the 90s. Post that he did several TV shows including Tu Tu Main Main, Sparsh, Sasural Genda Phool and Tera Mujhse Hai Pehle Ka Naata Koi. Here in the show, he is essaying the role of Omkara and Rudra’s father who has a mistress too.

Tej’s wife and Omkara’s mother is the serial is played by the gorgeous Mrinal Deshraj who was last seen in Maharana Pratap serial as Uma. Earlier she was seen as Padmini (Anupama’s Jethani) in Doli Saje Ke. In the popular TV serial Kahiin Toh Hoga starring Aamna Shariff, she essayed the role of Shipra.

Tej’s mistress Svetlana is played by model and actress Reyhna Malhotra. Earlier she was seen in Jamai Raja as Samaira Patel. She has done a Telugu film Antha Scene Ledu in 2014.Navina Bole as Tia

All About Surbhi Jyoti and Karanvir Bohra’s Role in Ishqbaaz

5 Reasons Why We Want to See Shivaay Singh Oberoi &#038; Anika as Couple asap!

Ishqbaaz Update: Who Will End Up With Omkara &#8211; Riddhima or Ishana?

5 Reasons Why We are Loving Ishqbaaz Serial