The Bollywood film Rustom starring Akshay Kumar is roughly based on the infamous K.M. Nanavati case where Kawas Manekshaw Nanavati, a Naval Commander murdered his friend Prem Bhagwandas Ahuja, who had an extra-marital affair with his wife Sylvia Nanavati.

Though K.M. Nanavati was proved not guilty by the Bombay Session court, the verdict was dismissed by the Bombay High Court and the case was retried as a bench trial. Nanavati was later convicted and sent to life imprisonment under Section 302 of the IPC. Later, he was pronounced “not guilty” in the trial. There are not one but many factors why K.M. Nanavati walked out as a free man. Here we share them one by one – 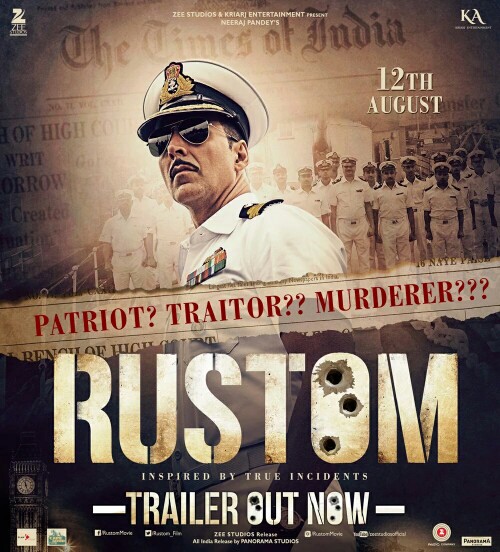 R.K. Karanji aka Russi Karanjia the founder of Blitz, the weekly tabloid exclusively covered Nanavati’s case and openly supported him. A Parsi himself with a passion to carry out investigative journalism he portrayed Kawas Manekshaw Nanavati as an “upright officer” and a “wronged husband” who was betrayed by his own friend of 15 years. In addition, he also built Nanavati’s image by portraying him as the man with ideal middle class family values and shammed Prem Ahuja for his playboy image.

Nanavati Case: The Letters of Sylvia Nanavati to Prem Ahuja

The defense argued that K.M. Nanavati shot Prem Ahuja after he denied marrying his wife Sylvia Nanavati. But, Prem’s sister Mamie Ahuja stated that Ahuja had agreed to marry Sylvia provided she divorced Nanavati. However, this claim was contradicted by a letter written by Sylvia Nanavati to Prem Ahuja where Sylvia not only expressed her wish to marry Prem by divorcing her husband, but also expressed her doubt if Prem had the same intentions like her. The letter talked about how Prem had mentioned “off all the girls available, he would marry one.”

In most of the cases, the law and the code of conduct are in consonance, but what happens when they are not? What happens when to honor one, the person has to violate the other? K.M. Nanavati’s infamous case met this enigmatic space.  In the case he stays true to his conduct which is to “protect his honor”, “the honor of his wife” and “the honor of the Indian Navy” but in the process, he breaks the law which states, he must not kill.

Besides, in the countless Hindi movies that we have seen, a “good man” a real Hero is not just the law-abiding citizen, but also the man who takes the law into his own hands when required. The Hero not only kills the villain, but also surrenders himself to the authorities and commits his crime. Yes, the upright man abides by the law. This Code of conduct and the constant backing of the Indian Navy helped Nanavati’s case. He became a national hero despite being a murderer.

The biggest support Nanavati got was from his own community members. Parsis all over Mumbai held rallies in his support. They even conducted an event at Jehangir Hall to back the Governor’s decree to put Nanavati under naval custody by suspending K.M Nanavati’s life sentence till his appeal was heard by the apex court. The rally saw around 8,500 people in attendance – 3,500 people in the hall and 5,000 outside the hall. The Parsi community as well as the public in general saw Nanavati has an upright naval officer strong sense of honour and high middle class values.

When VK Krishna Menon was high commissioner to the United Kingdom, K.M. Nanavati had worked as Defence Attaché him. This was the time when the Nava officer had grown close to the Nehrus. Also, during the entire phase of his trial and sentencing, Pandit Jawaharlal Nehru was the Prime Minister of India and Vijayalakshmi Pandit, his sister was the governor of the state of Maharashtra.

An Application to Pardon Bhai Pratap

Despite a strong uproar from all the areas, the governor didn’t pardon Nanavati mainly because it was feared that a pardon to him could provoke angry reactions from the entire Sindhi community – the community of Prem Ahuja who constantly supported Mamie Ahuja in her struggle to get justice for her brother.

However, during this time, the government received a request letter to pardon Bhai Pratap – a Sindhi trader who had been an active participant in India’s Independence struggle but was condemned for misusing an import license. Given his freedom fighter background, and the comparative smallness of his crime, the government was liable to pardon Bhai Pratap. This worked in favor of the Nanavati case too.

Ram Jethmalani, the prosecutor in the case was asked to persuade his client Mamie Ahuja to forgive the killer of her brother. Following which, the lady gave her assent for his pardon in writing. Next, the Governor of Maharashtra, Vijayalakshmi Pandit, pardoned both, Bhai Pratap and K.M. Nanavati on the same day.

This is how K.M. Nanavati was released and pronounced “not guilty” in the infamous 1959 Nanavati Case!!!

Facebook Comments Box
About Deepti Verma 324 Articles
Deepti Verma is a Political/Social Writer with an opinion on almost everything! Follow @universal_rover