OMG the reactions on the Major Leetul Gogoi issue on the social media are absolutely hilarious. 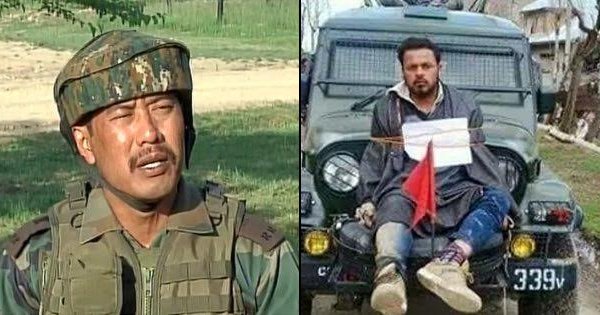 As the story goes, Major Leetul Gogoi booked a room in a hotel in Srinagar using the website Booking.com for 1 night for 2 adults.

When he went to check into the hotel, he was asked for the identification papers and he provided his papers and the Aadhaar card of a girl.

The Hotel management suspected a rat when they saw the girl was local and they denied the room to Gogoi.

Gogoi had an argument with the Hotel Manager, which escalated into some sort of a fight as Gogoi’s driver tried to muscle his way around. (This entire story is on record in an interview with CCTV footage available)

The Cops were called by the Hotel, who promptly arrived on the scene and took the people away for questioning.

The Cops verified (and are on record with Indian Express) that the girl was not a minor.

Major Gogoi never checked into his room, much less being found in a compromising position with anyone.

So it is quite absurd that people are talking about molestation of minor girl and some even screaming RAPE.

Well, guys and girls, I hope you do realize that for “Rape” to happen there needs to be a “Sexual Encounter” which has to take place. Just booking a room over Booking.com does not make you a rapist.

I know most of you have an axe to grind against Gogoi, after all he was the guy who was glorified for tying a guy in the front of the jeep and using him as a human shield.

I understand that you are pissed off about that, but does that justify falling for a false story and going on an all-out rampage with wild untrue allegations?

That is a question, you have to answer for yourself.

As far as I stand, I don’t see a problem with two consenting adults booking a room in a hotel with whatever intentions they might have.

I don’t see a problem with Army Men wanting to bonk a lady in the privacy of a hotel room.

And I don’t see a problem with someone booking a room for 2 Adults over Booking.com

Disclaimer: When you come into limelight for tying up a person to your jeep using him as a human shield, you have to be extra careful about the Leetul things you do in life.

EDIT: Since so many people have a confusion about the Girl’s age, The Wire (along with quite a few other news agencies) have confirmed that the Police have documents of the girl which shows her DOB as 1999 and have determined that the girl is an Adult. They are currently verifying the authenticity of the documents. Now it’s up to you, if you want to believe The Wire, The Police Statement, The Indian Express or you want to believe the Hotel Receptionist and Firstpost