On 25th June 1975, in just one day, India, from being the largest democracy in the world degenerated into a dictatorship. For the next 21 months India would be under the firm autocratic rule of Mrs Gandhi.  During those days, to some Indira was India and India was Indira. It was during those egregiously dark days of emergency that our current PM Narendra Modi played an instrumental part in resisting dictatorship as a young cadre of RSS. His revolutionary actions might have also indirectly forced Indira to call off the emergency. 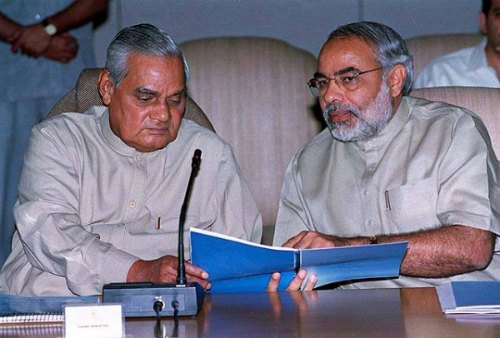 Here are the extraordinary facts from the past – the revolutionary days of Narendra Modi.

After returning from his spiritual wanderings, Modi immediately contacted his mentor Inamdar. He was now quite certain about what he wanted to do in the future and that was to commit himself to the political service of the country. He soon made his way to Delhi and stayed with his uncle Babubhai. He worked in a small rudimentary canteen whose franchise was owned by his uncle to earn his livelihood.

After staying in Delhi for sometime, he arrived at Ahmedabad and took active participation in RSS and rose in position under the guidance of mentor, ‘Vakil Saheb’. In the words of Narendra Modi the daily routine at RSS involved‘Waking up at 5.00 a.m., fetching milk, waking everybody up, participating in morning prayers, making tea and serving everyone. It was followed by cleaning utensils, going to the shakha, returning and making snacks for everyone. Then I served breakfast from 8.30 to 9.00 a.m., after which I had to clean up the entire building, consisting of eight to nine rooms. I swept and mopped the whole place, and washed both Vakil Saheb’s and my clothes … For lunch, I used to go to some swayamsevak’s house by rotation. After returning to Hedgewar Bhavan I again got to work and made tea for everyone. This was my routine for at least a year, and this was the time when I met many people.’

His hard work and diligence was noticed and he gradually rose up the ladder of hierarchy in RSS. On top of his daily duties, Inamdar also made sure that Modi pursue higher education. Narendra Modi successfully completed his M.A in political science from Delhi University under an extramural programme.

On 12 June 1975 the Congress-led state government in Gujarat was voted out and on this very same day the Allahabad High Court declared ‘Indira’s 1971 election to Parliament null and void and banned her from holding any public office for six years’. This led to the declaration of Emergency by Indira Gandhi and India found itself under a dictatorship. By the time the prominent opposition leaders came to terms with what has actually happened, they all were arrested. It was the young cadres of opposition parties that played a huge part in resisting the emergency. And out of all the states Gujarat, which was already experiencing severe anti-congress sentiments before the emergency, became the bastion of resistance.

The Acts of a Revolutionary

In Gujarat the RSS had embraced the Nav Nirman Movement and created a large network of underground operatives. The RSS also managed to create a co-ordinating committee for the fight against emergency- the Gujarat Lok Sangharsh Samiti (GLSS). It was in these trying times that Narendra Modi became an active underground revolutionary for overthrowing the dictatorship of Mrs Gandhi. Narendra Modi took active part in transporting activists, arranging secret meeting and creating safe houses for the party members. Modi soon became the ‘Go-to man’ of Anti-emergency resistance in Gujarat. Many stories about Modi’s involvement in Anti-Emergency activities abound in Gujarat, some confirmed and some unconfirmed. According to one such account Deshmukh, a leader in GLSS, was arrested by the police with a written note of all the future plans of GLSS and the entire future plan of action of GLSS was in danger of being discovered. It was then Modi along with a woman, who acted as Deshmukhs’ relative, was able to gain audience with Deshmukh inside the jail. During the lady’s conversation with Deshmukh, Modi, very tactfully, was able to retrieve the paper that contained the future plans of GLSS from right under the nose of the police.

In another incident, it is claimed that a disguised Modi broke into a jail in Bhavnagar to meet the journalist Vishnu Pandya and Shankersinh Vaghela, who is now the Leader of Opposition in Gujarat and a congress politician. This incident though remains unconfirmed.

The papers that ended the Emergency

Modi was also instrumental in smuggling samizdat material, which portrayed the harsh condition that existed in India under emergency, on Delhi bound trains. This material was then distributed by local RSS members to the foreign commonwealth dignitaries that visited New Delhi during that time. In this process, the dire condition of Indian people under the harsh emergency rule were communicated to the external world. This action paved the way for the revocation of emergency by Indira Gandhi, as journalist Tavleen Singh pointed out later, that Indira couldn’t bear the fact that ‘the Western media had taken to calling her a dictator’.

The revolutionary days and its impact on Modi

During the emergency Modi’s ingenuity and bravery was noted by the RSS top brass. As the author Andy Marino, Modi’s biographer, writes ‘On one outing he would appear as a saffron-robed sanyasi, on another as a turbaned Sikh. One time he was sitting in a railway carriage, hiding behind a thick black beard..’; his penchant for disguise to avoid capture was well known. Emergency also played an important part in developing organizational skills in a young Modi. It also helped in politically developing the novice RSS ‘pracharak’.

Narendra Modi – Facts From His Life as a Wanderer