Earlier in the article Narendra Modi : Facts From His childhood, we had presented the childhood of our PM Narendra Modi, and now we give you a detailed account of Modi’s days as a wanderer. Modi in his early adulthood decided to ‘see the Himalayas’ and taking a paltry amount of money with him, he commenced on a journey that took him not only to the Himalayas but to the far corners of the  nation. 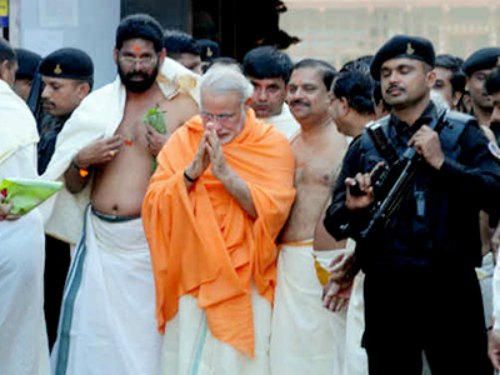 Here is the amazing story of Narendra Modi the wanderer.

Modi learnt about his betrothal to Jashodaben only when he was at the threshold of adulthood.

As per customs, the bride and groom are married upon reaching the legal married age and only then start to cohabit. But before Jashodaben could reach adulthood, Modi had already left home to ‘see the Himalayas’. He became a wanderer and roamed all over India in search of spiritual knowledge.

Thus, his marriage with Jashodaben was never consummated. It was his personal pilgrimage and he travelled all the way to Belur math in Kolkata, the headquarters of Vivekananda’s Ramakrishna Mission. He reached Belur Math in the summer of 1968 and met Swami Madhabanandaji Maharaj. To Modi’s dismay, he learnt that it was a post graduation institution and he had to finish his college education to be able to stay at Belur Math.

After staying at Belur math for few days, Modi travelled to the remote areas of Bengal and then carried on further east to Assam.

After reaching Guwahati, he moved even further east to the remote jungles of the northeast. It was there that he met a hermit and became his friend. He stayed with the hermit for one month, helping the hermit in his garden and discussing on spiritual subjects. Modi then made a long journey westward to Almora , where he again tried to enter into a monastic life in Advaita Ashram, built by Swami Vivekananda, but was refused due to his education qualifications. Throughout the journey Modi never tried to retrace his movement but always looked forward to seeing new places. His travel took him from Gujarat to the North East and from the plains of Bihar and Bengal to the Mountains of Himachal.

He finally made his way to Gujarat and visited the Ramakrishna mission in Rajkot.

It was here that, on requesting to join the mission as a young monk, Modi was replied by Swami Atmasthanandaji Maharaj that he was not made for a monastic life but, that his real duties lie somewhere else. Perhaps he saw the destiny that awaited the ragged, weather beaten and bearded wanderer.

Modi had left from his home with a little sum of money and a few pair of clothes.

The journey took him two years and as the money was barely enough for few weeks, the majority of time he travelled penniless. Thus from a very young age he had taught himself not to be dependent on money. We could only imagine what it entailed to travel the entire length and breadth of the country on such low resources. This phase of Modi’s life as a young wanderer is very similar to that of Subhas Chandra Bose’s wanderings, which Bose had taken at a very young age in search of a spiritual guru. Both Bose and Modi had their ‘discovery of India’ at a young age.

The experience of his wanderer days would forever leave a mark on Modi and according to Modi himself this phase of his life taught him many useful life lessons. The adventures in his life do not end with him returning back to his home in Vadnagar but rather intensifies as he will lead a life of a revolutionary in the dark emergency days.

In the next article on Modi’s life, we will bring facts from his life during the emergency days and don’t be surprised if we tell you that he was indirectly responsible for the end of emergency. So keep checking this space for the next article.

Narendra Modi : Facts From His Life as a Revolutionary