When India’s Prime Minister Narendra Modi tweeted that he was going to ‘drop by’ in Lahore on his way to India from Moscow via Kabul, we all were in a big surprise. Well, Prime Minister’s never visit a neighboring country just like that especially when the country in question is Pakistan and his predecessor never visited the country during his 10 years tenure. 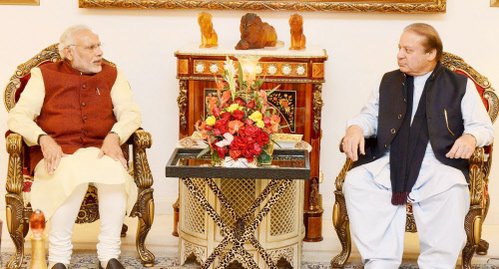 Modi Called Sharif to Wish Him on his Birthday, He Invited Modi & He Readily Agreed to do so

It was 25th December, India’s PM Narendra Modi arrived in Kabul from Moscow. Next, he called up Pakistan’s Prime Minister Nawaz Sharif to greet him on his Birthday. Sharif was quite sharif and immediately mentioned, “Why don’t you drop by Lahore since you’ll be flying India over Pakistan?” Narendra Modi readily agrees, tweets about it and gives a surprise, not just to Nawaz Sharif but the entire world.

Looking forward to meeting PM Nawaz Sharif in Lahore today afternoon, where I will drop by on my way back to Delhi.

The Remarkable Day Has a Historical Significance

Well, 25th December is not just Nawaz Sharif’s birthday but also marks the birthday of two great personalities from both the nations – ex-Prime Minister Atal Bihari Vajpayee, and the founder of Pakistan – Muhammad Ali Jinnah.

Sharif welcomed PM Modi at the Lahore Airport with a big hug. Interestingly, he was also present at the Lahore airport when Modi’s flight was taking off from Pakistan.

Am personally touched by Nawaz Sharif Sahab ‘s gesture of welcoming me at Lahore airport and coming to the airport when I left.

Modi Went to Sharif’s Ancestral Residence in a Helicopter

After hugging each other at the Allama Iqbal Internation Airport, the two took a helicopter to Nawaz Sharif’s ancestral residence in Raiwind Palace which was about 40 km from the Lahore airport. He also attended the wedding of Sharif’s granddaughter.

The Two Had a ‘Chai Pe Charcha’ with Vegetarian Delicacies

Both the Prime Ministers had a one to one talk as they had their own ‘chai pe charcha’ moment. The menu it seems had Kashmiri tea, kheer and some vegetarian dishes.

According to PTI, after reaching Sharif’s residence in Raiwind, India’s Prime Minister met Sharif’s mother and even touched her feet.

What do you have to say about this surprise ‘Chai Pe Charcha’ of PM Narendra Modi with Nawaz Sharif?