A Pakistani Terrorist has been caught alive in Jammu and Kashmir’s Udhampur district after attacking BSF Convoy.

Here’s everything you should know about the terrorist: 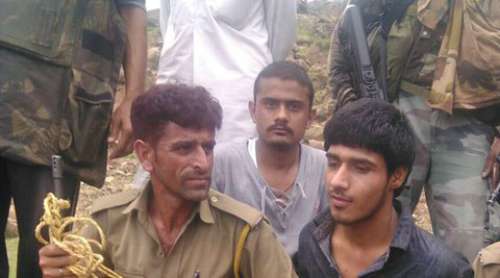 The terrorist introduced himself as Usman Khan to the villagers in Udhampur. Later, when he was caught by the BSF he mentioned that his name is Kasim Khan. However, after investigations he revealed his real name – Mohammed Naved.

He belongs to the same place as that of Ajmal Kasab – Faisalabad. He is just 16 – 18 years old. He has two brothers. While, one is a lecturer another one is a trader.

Naved crossed the Indian border a week ago with his colleague. While crossing border the terrorist possessed no arms and ammunition. They received arms here in India after crossing the borders by the local modules.

Naved is one among Lashkar-e-Taiba

Naved and his partner are Lashkar-e-TAiba operatives. They have been trained and it is widely assumed that the trained Terrorists generally belong to this notorious gang. Naved and his co terrorist’s target was Amarnath yatra.

It all started when Kasim and his fellow terrorist (Momin) attacked BSF Convoy which was on its way to Srinagar from Jammu at the Nassu belt. In crossfire two of our soldiers sacrificed their lives but not before killing Momin, the terrorist. Kasim’s fellow terrorist died on the spot and Kasim ran from the spot in a nearby village.

Kasim Khan ran away from the spot and held 3 people as hostage since he was looking for an escape route. Next,  Kasim kept Rakesh Kumar Sharma one of the hostage at gunpoint and asked him to take him at some safe place where nobody would see him.  The other hostage was Rakesh Kumar’s relative Vikramjit Singh.  Things got under their control when Kasim aka Usman Khan felt an urge to eat. Taking advantage of the situation the two bravehearts wrestled with the terrorist and tried to disarm him. This continued for half an hour.

Meanwhile, the third hostage tried tried to bring two more villagemen who helped in cornering the terrorist. Soon BSF came on the spot and managed to take control of the situation and immediately pushed the bravehearts out of the scene to gain control on the lone terrorist.

This is how unarmed and alert civilians in spite of facing death threats captured a Terrorist alive.

Mohammed Naved revealed that he came to kill Hindus and said it is all fun to do this.