If you see the Islamic State as a rational geopolitical actor then it doesn’t make any sense. A nascent terrorist state that is constantly at war on all fronts. No self-interested state would prefer war on all sides but the Islamic State has never made any attempts to negotiate a truce on any of the fronts. It is currently at war with the Syria, Iraq and the Kurdish people. Furthermore IS (Islamic State) is such a state that perpetrates brutal executions and uses these inhuman acts in their propaganda material to antagonize the whole of the civilized world. 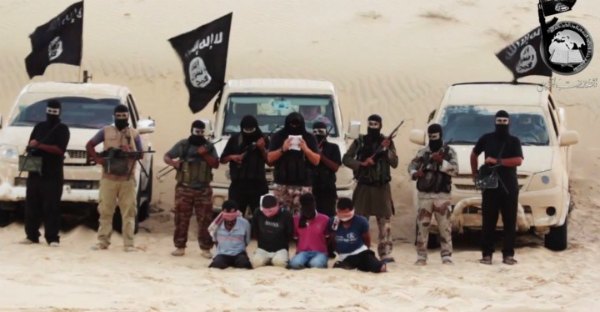 Even the worst perpetrators of crimes against humanity like the Nazis have tried to hide their crimes from the eyes of the world. But on the contrary the IS proudly displays its indescribable acts to the entire world and provokes regional and international powers. Their beheading of Egyptian Christians precipitated the Egyptian Governments air strike against ISIS interests. Similarly the burning of Jordanian pilot and beheading of Western citizens further infuriated the Arabs and the western world respectively. This led to an intense air bombing offensive against the IS which killed thousands of their fighters. The ISIS is also at loggerheads with their fellow Islamic extremists, the Al-Qaeda.  Do they have no strategic concern for its survival as a state and is going down a path of self destruction by being at war with everybody? The answer lies in the religious interpretation and beliefs of the IS and also it’s believe in a prophecy- what is Islamic state Prophecy?

The Prophecy : What is Islamic State Prophecy

The Islamic State believes in a prophecy of the apocalypse, a judgement day, when ‘the army of Rome’ will be defeated by the Islamic soldiers in Dabiq, a town in northern Syria. They believe that the Mohammed himself predicted that after the defeat of ‘the Army of Rome’ at Dabiq, the judgement day will come in which the non-believers or infidels (kuffar) will be eternally damned and true Islam will triumph. Here the ‘the Army of Rome’ may mean the Christian Army, or as some belief it may refer to the Army of Turkey, as Istanbul or Constantinople  was under the rule of Romans during the time of Mohammed.

The prophecy is so well ingrained into the mind and hearts of the ISIS personals that they have named their English magazine as Dabiq after their forces captured the strategically unimportant town of Dabiq despite suffering high casualties.  The zeal to bring about the apocalypse has shaped Islamic State’s strategic behaviour. They want the ‘Christian Army’ or the western forces into Syria so that the ‘end of days’ prophecy can come true. To bring about such a scenario the IS has not left any stone unturned to wage continuous war and to antagonise the western governments by despicable executions and mass murders. They will be fighting and murdering till the prophetic battle at Dabiq is not won. They believe they are the harbinger of Doom.

The brutal executions, beheadings and crucifixions have appalled the whole civilized world. This barbaric demeanour of the IS fighters makes many wonder if they don’t have any sense of humanity. The IS believes that they are like the early followers of Islam when Mohammed was faced with continuous war and surrounded by pagan infidels. Similarly, the ISIS sees themselves as the army of Mohammed which is waging a jihad against the infidels and apostates (Muslims) to bring about the victory of True Islam.  According to the rule of war that existed in those ancient times, it was absolutely licit to behead, crucify and enslave enemy populace so that they would not resist their subjugation. Similarly the Islamic State fighters are following those thousands of years old rules and perpetrating immense brutalities without any sense of remorse. For them it is the obligation of the state to put fear in the hearts of people to ensure their adherence to Islamic State’s rule and to fasten the ultimate victory.

Moreover these brutalities are filmed and used as propaganda material to radicalise the disenchanted Muslim youths and teens staying abroad. These films become a useful tool in recruiting new fighters from all over the world. Apart from recruiting, these videos of barbaric acts infuriates the world, particularly in the western world, which in turn puts pressure on the US and its allied states to take a more active role in defeating the Islamic State by bringing boots on the ground- which the Islamic states wants very dearly so that it can have its final battle with the ‘Army of Rome’ at Dabiq. In a beheading video the infamous masked executioner known as ‘Jihadi John’ threatened “We bury the first crusader in Dabiq, eagerly waiting for the rest of your armies to arrive.” If the Islamic state conducts successful military campaigns in the near future then they may not have to wait too long.

The Islamic State is simultaneously at war with multiple factions. They are fighting in all directions and their territorial extent is surrounded by hostile forces but still there has been no attempt at reaching an agreement on negotiated peace with any of their adversaries. Apart from the belief in the prophetic doomsday war at Dabiq, their interpretation of Islamic law is also responsible for such a stance. As according to their law a Caliph is only permitted to have temporary peace and that also should not be simultaneously with all the enemies. Accepting any permanent peace agreement or borders will go against the law. Furthermore the Caliph is expected to wage jihad at least once a year.

So the road ahead for the Islamic State is full of wars and brutalities. It will continue its advances on all fronts until they are pushed back. In its zealous attempt to bring about the cherished apocalyptic battle with the ‘Crusaders’ at Dabiq, the Islamic State would wage Total War. As far as the prophecy is concerned it is best to leave it to the fanatics but the IS will turn into a suicidal juggernaut that will smash everything in its way, until finally going off in a burst of flame. All in the name of religion.

Can We Deal With Pakistan With Water Rather Than Bullets

The Ukraine Civil War : Who is to be blamed?