Starting from August, at least 20 Farmers have lost their lives and 600 have been adversely affected by pesticides poisoning in Vidarbha region of Maharashtra. With symptoms like dizziness, temporary loss of vision, headaches, and nausea, more than 100 are still recovering at the hospital. While some are in a critical state, others have lost their sight. 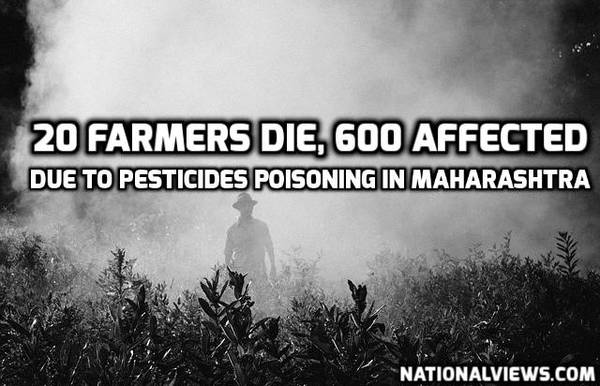 Unfortunately, the officials didn’t miss to blame the victims by emphasizing that these farmers didn’t wear protective gear. However, the question remains, why (in the first place) are we allowing such lethal pesticides in the market? If not wearing a protective gear can kill a human, imagine how badly it affects our crops, air, water, and environment. What will happen if cattle eat the grass surrounding these crops? Will the villagers not drink a certain poisonous milk or eat a poisonous meat? Won’t it affect the health of the children growing in the entire region? Imagine the hazardous health effects of these pesticides on not only on a single active farmer but also on all the short-term and long-term passive victims.

Why Not Ban these Pesticides? They Can Never Be a Boon to Farmers…They Will Always Be a Bane

In India, maximum of the farmers do not go the innovative way but follow the duplication method where they follow exactly the same that the rest of the crowd is following. They do not search for things that can benefit them, but simply use things that are easily available in the local market/shop. Whatever is available in these shops are used by the ignorant farmers. If these shops give them ‘elixir’ they’ll use it and if they give them ‘poison’ they’ll use it too.

This is the reason why it is important to put a restriction on the sale of these lethal pesticides when it comes to agriculture. I mean how on earth is a farmer given a pesticide that can take his life if he doesn’t wear a protective gear? Instead of risking with life, health and flirting with the environment, can’t our government and regulatory bodies simply ban these pesticides? After all, pesticides can never be an asset, it is always a liability. Imagine the rate at which it has been destroying the health of the farmer’s soil by damaging it thoroughly.

How about Promoting Nutrients and Micronutrients Instead of Promoting Poisoning Pesticides?

Prevention is always better than cure, then whether it is for humans or plants. If eating healthy foods with nutrient and micronutrient can increase your immunity and make you less prone to diseases, a good dose of nutrients and micronutrients will make the plants immune to pests too. However, our government and various bodies instead of introducing them to farmers on large scale have been blaming them for not using the pesticides properly.

Why would a farmer even need pesticides if he has a healthy plant? And let’s assume even if the nourished plant falls prey to some pest, the plant wouldn’t require such toxic pesticides let alone a pesticide that can kill a human. So instead of protecting the companies producing pesticides, the government should rather start making provisions of nutrients and micronutrients to the farmers.

Instead of announcing Rs. 200,000 to the deceased due to pesticides poisoning, the state government along with the central government should rather work on something that can not only promote viable farming without pesticides but also endorse organic farming even at the lowest level. There are few innovative farmers who have invented organic pesticides that cannot only protect their plant but also safeguard it completely. Why cannot the government encourage such initiatives than silently let the pesticide industry grow to the next level.

Isn’t this high time that all the state government start giving farmers the access to nutrients and micronutrients, increase the minimum support price, provide facilities and amenities based on the area’s requirement and let the farmer earn on his capability than giving him 1 paisa or 12 rupees in the name of subsidy?

What is more significant after all, a helping hand during the initiation process or an incompetent dose of medicine when the damage has already done?