“Chalo Kuch Milkar Naya Karein” was the theme of Railway Budget 2016 this year. While, the aam aadmi, the common people of India had high hopes, the rail budget failed to satisfy their needs, forget, meeting their expectations.

Here, we shall tell you why the Railway Budget is absolutely low on content and very high on rhetorics: 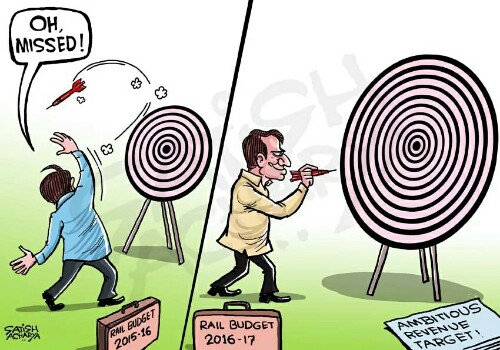 The Railway Budget 2016 Has Introduced Four New Trains, but Talks Nothing About It

Suresh Prabhu introduced 3 new trains under reserved category – Tejas, Humsafar and Uday, and 1 under unreserved category – Antyodaya Express. While it focuses on the features of the trains and boasts about having entertainment and optional meal service, we have neither any idea by when these trains will start nor the routes where it will run.

In addition, we have no idea about the number of these trains. Without knowing the ground reality of these trains, the mere news of an announcement of trains doesn’t make any sense.

Rail Budget 2016 – SMART Coaches To Be Introduced – But By When, How and In Which Trains?

In the Railway Budget 2016, we heard that Specially Modified Aesthetic Refreshing Travel Coaches having new amenities will be introduced with amenities like automatic doors, entertainment screens, accessible dustbins, bio-vacuum toilets, ergonomic seating and even vending machines. However, we have no idea what all trains will have these facilities. We have absolutely no clue whether it will be introduced only in few trains or all trains will have this.

Yes, Suresh Prabhu did talk about introducing SMART coaches, but he doesn’t emphazise much on when will we have the pleasure of travelling in SMART coaches. Also, whether the trains running in all the routes will have these coaches is still a big question mark.

According to the Railway Budget 2016, there will be Integration of all facilities into 2 Mobile Applications that will deal with ticketing issues and/for receipt as well as redressal of complaints and suggestions. Again there is no details and I still wonder when will the Railways Introduce online booking/mobile booking for Platform tickets. You know how painful it is to escort a relative/family member when you are not the traveller.

The railway minister did mention that the ministry “plans to implement” ticket vending machine for platform tickets. However, we have no idea when will the plan see the light if the day, 2 years, 4 years, 10 years, we have absolutely no idea.

No Reservations For Senior Citizen Yet

This indicates that there was a quota earlier too but does this so-called quota help anyways? However, much to my dismay when I booked a ticket for a female Senior Citizen (travelling alone) 3 months prior to her journey in December 2015, she got a Upper berth.

No wonder, it doesn’t guarantee the Senior Citizens, a lower berth, forget a reserved seat. The priority shouldn’t have been quota but CONFIRMED reservation for Senior Citizen.

Train Borne Entertainment? How About Train Borne Peace For Passengers With Reservations?

The 2016 budget of railway talks about introducing FM. However, on the busiest routes especially Mumbai to Gorakhpur and others, where the trains are less, and passengers are more, the priority should be on increasing the trains and railway lines, thereby restricting the entry of non-reserved passengers to enter the reservation coach.

Without giving people the relief of Travelling peacefully by introducing plans that ensure a relaxed travel, we wonder how the rail budget talks about entertainment. Though it is a welcome sign, we think it is secondary. More trains on busy routes with less trains should have been their priority.

Also, the Railway Budget doesn’t clear it at all whether the bio-toilets and other provisions that the government is talking about will be available for all the trains or just the premiere trains.

Tell us what was one thing about the Rail Budget 2016 that made you happy as a common man? That one thing that has been introduced in the budget that you think will benefit the common man (in general) in hassle free travelling!

Recent Court Cases and My Dwindling Faith in Judiciary in India

Here’s Why the Veterans Rejected OROP – One Rank One Pension Plan!