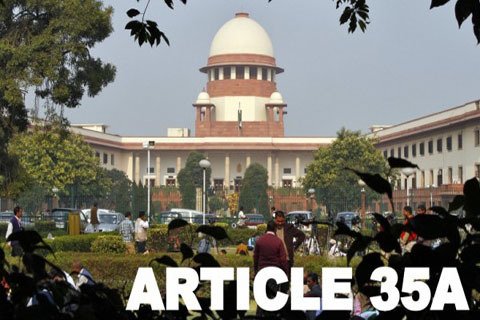 No acquisition of unmovable property in the state. No one from outside the state can buy or own the land. For instance, a person from the state of Maharashtra (or any other state or Union Territory in India) cannot purchase a land or property in Jammu and Kashmir.

Right of Scholarship and other such forms of aids from the state government. Privileged for state subjects only.

Why Is Article 35A Being Challenged?

In 2014, an NGO – “We the Citizens” challenged Article 35A in the Supreme Court. Now that the Article restricts outsiders from acquiring asset and properties in Jammu and Kashmir, it is believed that it is inequality to the people from rest of India as they too have the right to stay, acquire lands and settle in the state. However, the people in support of the Article believes scrapping ‘it’ would alter the demography of the state.

What are the Arguments in favour of scrapping Article 35A?

What are the Arguments against scrapping the Article?

The for and the Against

The Rashtriya Swayamsevak Sangh (RSS) and the political party Bharatiya Janata Party (BJP) are in favour of scrapping Article 35A. However, People’s Democratic Party (PDP), the Kashmiri separatists, the National Conference are against the scrapping of the Article. Now if the SC order goes against the article, some separatist leaders have commended the people in the state to launch a mass agitation.

What is Bench’s take on Article 35A, the offshoot of Article 370?

The Supreme Court of India was prepared to have a dialog on scrapping Article 35A. However, the state government opposed such a move. The matter has now been referred to three judge bench – CJ Dipak Misra, Justice DY Chandrachud and Justice AM Khanwilkar.

Both the center and the Jammu and Kashmir government asked the apex court not to pass an interim order on this sensitive matter. The SC deferred hearing pleas challenging the validity of the article and posted the case for hearing on August 6.