The Tu Tu Mein Mein game and mindset have taken a new turn ahead of the UP elections 2017. Here, at one side of the ring is BJP and on the other side is Mayawati’s BSP. It all started when Dayashankar Singh, the heavy-duty applicant of BJP ticket from Balia seat in the UP Assembly election axed his own political prospect by making an unsavory remark against BSP supremo Mayawati.

While BJP condemned his statement and even distanced the party from his remarks, Dayashankar Singh gave a golden opportunity to BSP to try and capitalize on the situation. However, BSP couldn’t use the golden chance as they too made a similar blunder of protesting against Dayashankar by involving his wife Swati Singh and their 12 yera old daughter. 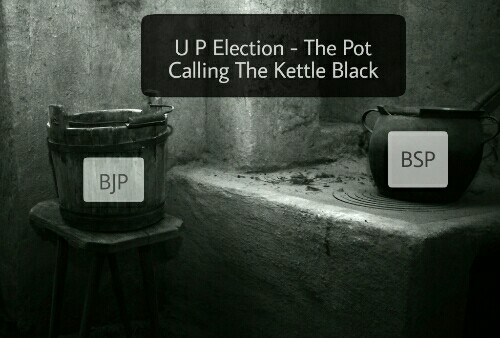 UP Assembly Election – The Pot Calling the Kettle Black

Ahead of the UP Elections 2017, the BJP – BSP tiff is a typical example of the pot calling the Kettle back. First, the leaders blame other leaders of being uncouth and uncivilized and then they repeat the same thing themselves while protesting against their ill-activities by doing the same thing with another twist. The BSP instead of being thankful to Dayashankar for giving a chance to revive the party by grasping the windfall instead wasted no time to ruin their own chance of a comeback by lacking the sagacity and patience to maximize their chance from a foolish blunder committed by BJP’s Dayashankar Singh.

They made the same blunder committed by Dayashankar when they used certain words against the family of Dayashankar Singh. Their protest outside the house was rather a foolish move. They should have known that BJP was waiting for ‘one wrong move’ and they readily gave them that chance.

Ahead of the UP Elections 2017, The Counter Move by BJP against BSP is Demeaning, Though Smart

Next, even before the original provocateur is arrested, BJP is ready with their counter move in the form of Dayashankar’s family – his wife Swati Singh and their 12-year-old daughter. A smart move, the political party has put all its brightest minds behind her. No matter, #ShameOnMayawati is already trending on Twitter where people are shaming the BSP leader. Dayashankar’s wife Swati is the nation’s new victim as BJP utilizes Swati’s shoulder to aim their gun against Mayawati.

Swati is indeed a victim and she is paying the price for her husband’s remark. But the real culprit is definitely not the men whom she is accusing. Both Swati and her daughter are the victims of “Dirty Politics”. In reality, the ladies are the target of those politicians who use common men for their counter move.

Swati’s husband did a huge political blunder by damaging the reputation of the party ahead of the election. However, the party smartly chose Swati to ensure that she sums up everything and even pays the price of her husband’s mistake by somehow trying to make things favorable for the party. Now to bring back the party in shape, Swati has to act, react and play to the tunes of the political party whose image was unknowingly (slip of tongue) damaged by her husband.

The Great Indian Circus has already started ahead of the UP Elections 2017. Though almost all the political parties are all ready to stoop low to move ahead in the race, we still hope they use less of “Dirty Politics” to get ahead of each other.