In the serial Chandra Nandni, Bindusar hates Dharma. He thinks both, Dharma and Nandini although nasty is behaving well in front of everybody. He neither can stand Nandini nor can he bare Dharma.  In fact, he believes that Dharma is in the palace only to insult him and his position. This is drifting apart Bindusar from Dharma to a level that he is doing nothing but hurting her profoundly. 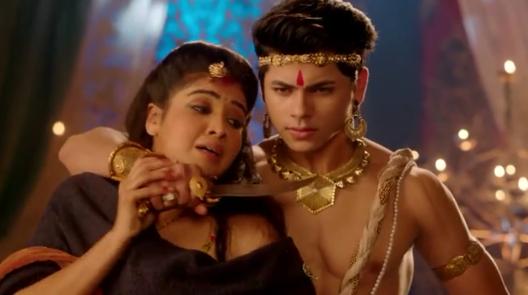 However, the question remains – how will Bindusar know that Dharma is not as bad as he thinks?

Currently, Dharma knows that it wasn’t Bindusar who had kidnapped her friend but his brother Adonus. She is feeling sorry for all the misunderstanding. So, she revealed everything to Maharaj Chandragupta Maurya. However, since at the time of verdict his body was possessed by Bhim Dev he punished Bindusar; increasing Dharma and Bindusar’s difference even more. After all, Bindusar’s verdict was depended on Dharma’s claim.

However, now both Chanakya and Nandini know the truth about Bhim Dev and Mohini. Together they will slowly work towards removing Bhim Dev’s soul from Chandragupta’s body. Once this is done, not just Bindusar but the entire palace and Magadh would know about the act of black magic on Maharaj Chandragupta Maurya.

Bindusar too would realize how badly he has been judging Dharma all this while. We hope once Chandra is safe and Nandini will disclose that her memory has come back, things will become normal between not just between Bindusar and Chandra but also Dharma and Bindusar.

Whether Bindusar reveals it or not the truth is he is obsessed by Dharma and somewhere down his heart, he has feelings for her as well. However, he is yet to realize that his feelings are not of hatred but of love. This is the reason why even though he claims to hate her, he cares for her almost at every occasion. These feelings along with the reality expose will surely make BIndusar accept Dharma in the upcoming episodes of Chandra Nandni.