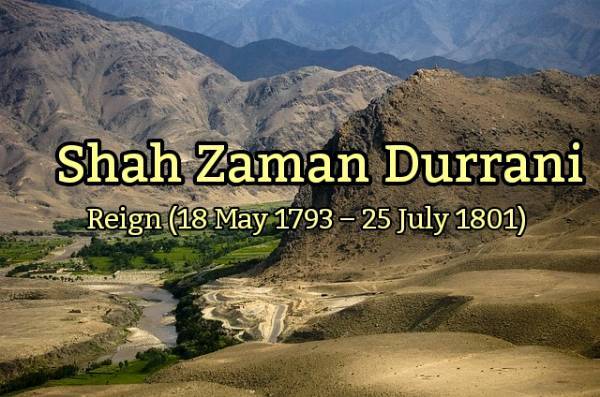 Here, we share everything you wanted to know about Shah Zaman Durrani –

He Was the Grandson of Ahmad Shah Durrani

Born in 1770, Shah Zaman Durrani was the son of Timur Shah Durrani and grandson of Ahmad Shah Durrani – the founder of the Durrani Empire. In spite of being the fifth son of his father, he succeeded in becoming the immediate heir to the throne post the death of his father. One of his brothers was Shah Shuja Durrani, a later Shah, who passed on the Kohinoor diamond to Maharaja Ranjit Singh.

Zaman Shah Durrani Was the Third Ruler of the Durrani Empire

He Defeated and Imprisoned His Brothers to Get to the Throne

In order to seize the throne of the Durrani Empire, Shah Zaman defeated his brothers, with the help of Barakzai Chief – Sardar Painda Khan Barakzai. He also compelled Mahmud Shah Durrani, his brother to take an oath of allegiance and relinquished the governorship of Herat to him.

Unlike his grandfather, Zaman Shah could never expand his empire. Credits to the Sikh army led by Maharaja Ranjit Singh who didn’t let him to do so. In addition, he was forced to protect his own land when the British induced the Shah of Persia to take over the Durrani Empire.

He Was Overthrown by his brother Mahmud Shah Durrani

It was because of the Barakzai leaders that Zaman Shah could sit on the throne but soon he started removing them from the prominent positions and replaced men from the Sadozai lineage. This didn’t go well with the Barakzai. Soon, they plotted against him and Shah executed the chiefs of Barakzai, Nurzai, Alizai Durrani clans.

Next, a agitated son of Sardar Painda Khan Barakzai fled to Iran and assured support of the Barakzai clan to Zaman’s rival and challenger, Mahmud Shah. The officers of Zaman Shah shook hands with the rebel and they could capture Kandahar without any bloodshed. Mahmud Shah could easily throw Zaman Shah from his throne.

He Was Blinded and Imprisoned

Post witnessing the turn in events, Zaman Shah tried to flee to Peshawar. However, he couldn’t do so as he was caught and blinded, and later imprisoned. Later, when Shah Shuja and Mahmud Shah had a tiff over the throne, it was Maharaja Ranjit Singh who had given asylum to Shah Shuja wife and Zaman Shah.