The term ‘Bharat Mata’ off late has become a political issue where the nation stands divided into two. To say ‘Bharat Mata Ki Jai’ or not to say is the national debate. Amidst all the political and religious chaos, we forgot that Bharat Mata is an allegory of our nation-state conceptualized by Artists and not political or religious figures. 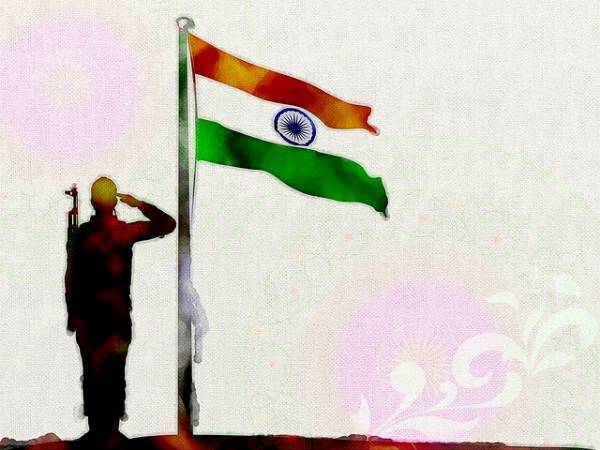 Bharat Mata is an icon of nationalism, not a political image. She is a visible form of idea, feeling, expression and love towards a nation, not a religious propoganda. She is a mother, mata, ammi, janani, aai, maa of Indians, not just Hindus in India. She is what we call Mother India in English, and Madre E Vatan in Urdu.

The fact that her inception was done by artists in the pre-Independence era where she as a mother is seeking liberation through her sons further states the real essence of her embodiment.

Bharat Mata in fact is a symbol of Indian unity, liberty and strength. She is a national pride and so cheering ‘Bharat Mata Ki Jai’ is nothing but hailing our motherland i.e India. After all, she is an allegory of national unity.

Besides, we all our proud of our motherland and there is nothing wrong in it by saying a slogan in her praise. The English translation of Bharat Mata Ki Jai simply means Victory to Mother India, which is same as Victory to India i.e. Jai Hind. To give a united national allegory, a divided religious angle is not only irony but also a national shame.

Hindus, Muslims, Christians, Sikh together in unison have shouted their lungs out in chanting ‘Bharat Mata Ki Jai’ during pre-Independence era with pride and glory. Back then no one found it offensive. Apparently, back then nobody politicized it. Off late, politicians from hard-line parties from both the sides are playing petty politics by giving the slogan a religious angle.

However, the aam admi, the Indians irrespective of their religious background must understand that politicians might try to instill ‘their’ propoganda in their minds, but, these political agenda should not effect our original beliefs. If not for these politicians and their petty politics, who would have imagined a simple slogan Bharat Maata Ki Jai would achieve such salience? Who would have thought it would create such a deep and divisive controversy?

Apparently, if you don’t say ‘Bharat Mata Ki Jai’ it neither makes you anti-national nor makes you a criminal. Nevertheless, refusing to say BMKJ is definitely not against the constitution, but then, it surely helps the propoganda of both right-wingers as well as Muslim politicans. Moreover, it endangers the spirit of fraternity, which we are so proud of!

We must remember the original essence of the slogan, not what the political propagandist want us to believe. Refusing to say BMJK in the umbrella of these opportunist crusaders will apparently further disrupt the national unity and divide the nation on the basis of religion. Thus, hurting not just us but also the secular fabric of our nation, something which we boom with pride and glory in the global milieu.

Lastly, saying Bharat Maata Ki Jai is not our duty, it is our right! And, Bharat Maata is not a religious figure, she is our motherland, the allegory of our nation-state, which we all are proud of irrespective of our religious belief.