Post-2002 riots the religion factor had masked the class and social caste conflict in the state of Gujarat. The caste system and discrimination were overshadowed by religious agenda where the upper caste and lower caste fought unanimously.

However, things took a drastic turn when the plight of the Dalit community increased day by day and all hell broke loose when the Dalits were beaten up by the same people with whom they had fought against the Muslims, the rakshaks back in the riots.

Today things have changed completely, the rakshaks (of the cows) have now turned bakshaks (of humans) and they didn’t even think twice before beating the members of the Dalit community for killing cows when all they were doing was skinning the already dead cow – something that the Dalits have been doing for the past hundred years and so. Nevertheless, waking up to find their condition same as that of the Muslims they now cry betrayal. This agitated the Dalits who were the foot soldiers of the Gujarat riots back in 2002 so much that the community was compelled to start a rally against the atrocities towards them – the Dalit Asmita Yatra. 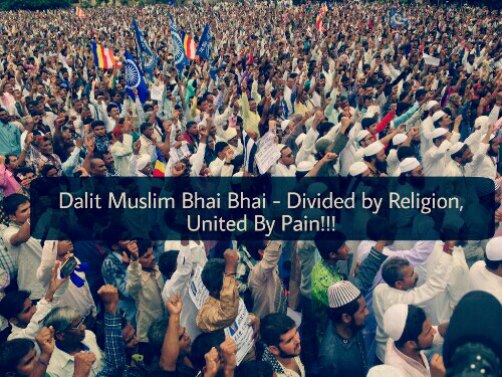 Going from the same pain as that of the Muslims, the Dalit found solace in their Muslim brothers. The Muslims themselves came out to support the Dalits as they too have been on a receiving end ever since the Sangh Parivar came into the political limelight. After all, these so-called gau rakshaks kill Dalits in the name of ‘live cows’ and Muslims in the name of ‘dead cows’.

A Dalit cobbler Ashok Parmar who became the face of the Godhra rioters has also joined the Asmita Yatra. Both the community have forgotten the past as they now know it was the upper caste people along with the political party who had pitted the Dalit against the Muslims for their selfish gains.

According to the Muslim community, the Asmita Rally started by the Dalits is their rally too as the atrocities of cow vigilantes have been growing day by day from the past two years not just in Gujarat but in many other states including Andhra Pradesh, Uttar Pradesh, Madhya Pradesh and Rajasthan. United by pain, the Muslims and Dalit are marching together on the roads for their common rights and issues.

Though the plight of the Dalits and Muslims has always been same they never came together. In fact, the distance widened between them post the 2002 Gujarat riots. Though their situation was same, they considered themselves different. However, when the brutalities towards Dalits became same as that of the Muslims, they realized their common enemy.

Yes, the Una incident brought the two communities together. This is the reason why the slogan “Bade Maze Ki Baat Hai, Dalit Muslim Saath Hai!” echoed on the streets when both Dalit and Muslims marched hand in hand.

Dalit Asmita Yatra : Support Has Been Pouring In

The Ambedkar association of North America has extended full support to the Dalit Asmita Yatra, the leaders were also joined by Rohit Vemula’s mother and a team from JNU. In addition, human rights group in various countries including France, Canada, Portugal, UK and Germany have expressed solidarity and support.

Meanwhile, support has been pouring in for the victims of the Una incident. The Ashram chief of the Wardha Gandhi Ashram has offered each family free of cost lodging for 25 years, a cow, 2 acres of land as well as educational facilities for their kids. In addition, the Gujarat Lok Samiti and the Sarva Seva Sangh of the Akhil Bhartiya Sarvodaya Mandal have jointly announced Rs. 50,000 donation to the victims.

Facebook Comments
About Deepti Verma 302 Articles
Deepti Verma is a Political/Social Writer with an opinion on almost everything! Follow @universal_rover