Press Release is a thing of the past. It is the most outdated thing in the world of Facebook and Twitter. While we were witnessing actors clearing out ‘rumours’ on their social media status, we now have politicians submitting their resignation letter on Facebook. 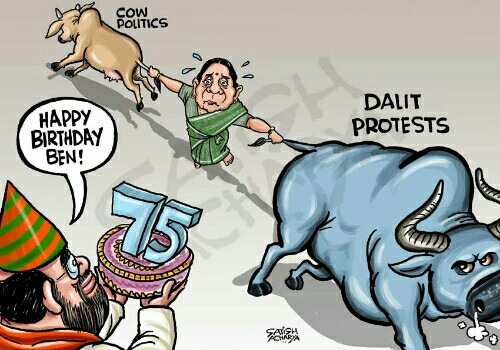 The fact that the Gujarat CM posted her resignation on Facebook proves how digitally advanced the state of Gujarat is. She has proven that Gujaratis are the first breed in India to take Narendra Modi’s Digital India campaign very seriously. In the process, Anandiben has also shown to the world how good the Internet signal strength is in the hometown of Narendra Modi.

Why Only Bollywood Hot Babes Take All The Limelight?

Katrina Kaif’s Facebook debut on her birthday brought a flood of congratulatory messages. With not so good recent past, Anandiben must have thought to gain the public sympathy by posting the resignation letter on FB rather than personally giving out to the BJP leaders. After all, even Arvind Kejriwal liked her post.  Besides, her post went viral no sooner than she posted it.

With all these sustainable talks going in and around the world during every Modi visit, it isn’t surprising to see Anandiben Patel following the model herself. After all, Gujaratis are known for their skills of saving money. So what if she thought of saving the money by resigning on social media – she was just setting an example of something that Modi has been blabbering from long.

The 74-year-old lady indeed has brains as she decided not to give fodder to the ever hungry Indian media by making her resignation public. By this move, she not only ditched their uncomfortable questions but also the awkward media trial. While social media enjoyed trolling her all day long, the Indian media regretted the chance of unleashing the ‘Breaking News’.

Everybody Likes to Be a Trendsetter

We are sure Anandiben must have been fed up of putting those random posts on social media every now and then. So by putting her papers on Social media, she not just became the ultimate trendsetter but also got a chance to close the chapter of social media forever. Interestingly, she also gave her party BJP something to boast in the upcoming Assembly election about Digital Gujarat.

Now that Anandiben Patel has truly been a Digital sensation by resigning on Facebook, we wonder what will the upcoming trend in BJP – Take oath on Twitter, Cabinet Meeting on Whatsapp?