Aham Sharma became the nation’s heartthrob as soon as he got recognition for his role in TV’s Mahabharat. The actor not only was mobbed in different places but even used to get midnight calls. Not just India, his popularity spread in far off nations like Indonesia too. Currently, he is being appreciated for his role Arjun in yet another TV serial produced by Swastik Pictures’ Dosti..Yaariyan..Manmarziyaan. 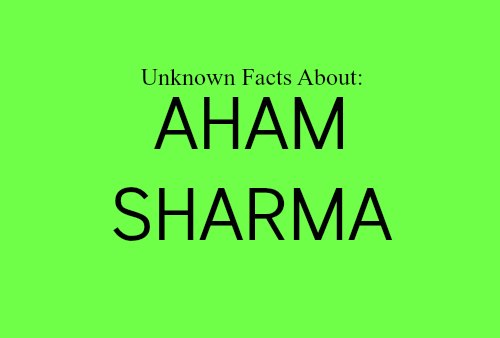 Here we share some of the interesting facts about Aham Sharma

Born on 22 July, 1986 in Barh, Bihar, Aham did his engineering in Indore. Though his dream was to act, right from his childhood days, Aham first did his engineering and only then shifted to Mumbai to pursue his career in acting into the Telly nagri. His family stays in Bihar. His father is a government official.

He Made His TV Debut with Yami Gautam in 2008

NDTV Imagine’s Chaand Ke Paar Chalo was Aham Sharma’s first serial. The co-star opposite him was none other than Yami Gautam. In an interview, Aham later said that he and his character Rehan resembles in many ways – both the reel life Aham and real life Aham had to stay away from his family. Next, he played the role of a dutiful son in Colors Bairi Piya. This happened in the year 2010.

He has Turned Villain Too

In Hum Ne Li Hai Shapath, he played a negative role of a doctor who has some weird super powers. In addition, he played a comic man with negative shades in Zee TV’s Ek Nayi Chotti si Zindagi. He played the role of Shravan, an obsessed lover. However, none of these roles gave him that prominence for which he wished.

After doing episodic roles in Fear Files, CID and Aahat, Aham finally bagged a role of Angad in Life Ok’s Aasman Se Aage in the year 2012. Here he was seen dancing as the show revolved life, in and around a dance academy. The show gave him enough recognition and the actor soon rose to prominence. Next, he bagged Siddharth Tewary’s Mahabharat in 2013. This role and show changed Aham’s life forever.

Aham Has Also Acted in Films

In the year 2009, Aham was seen in a film titled Blue Oranges which had Harsh Chayya and Rati Agnihotri in main roles. Next, in the year 2012, he was also seen in the movie Ye Jo Mohabbat Hai which starred Farida Jalal, Rati Agnihotri and Mohnish Bhel. Additionally, he was also seen in last year’s movie Karle Pyaar Karle which raised around 75 Lakhs.

Many of the people think that Aham Sharma always hid his marital status. However, the fact is, back when Aham married he was not a popular star and nobody was interested in his personal life. He too never spoke about it. But, Aham is happily married and he now doesn’t prefer talking about his married life. His, wife, however, doesn’t belong to the Tele industry.

Currently, Aham Sharma is seen as the mysterious Arjun in Dosti..Yaariyaan..Manmarziyaan

Interesting Facts About Ruhana Khanna – The Little Gangaa Of TV