Shobhaa De’s comment on Indian Athletes,‘Rio Jao, Selfie Lo, Khaali Haath Wapas Aaa Jao’ has not gone down well with Indians in general. After all, we all know that it isn’t fair to blame our athletes when there is a lethargic bureaucracy who is clumsy and corrupt.

Besides, if at all, an Indian athlete wins a medal it means that he/she has overcome more odds than most of his/her counterparts across the world. India in Olympics isn’t United States, China, Russia, Korea or Australia, not because of the players but because of our corrupt, incompetent, and ham-fisted system. 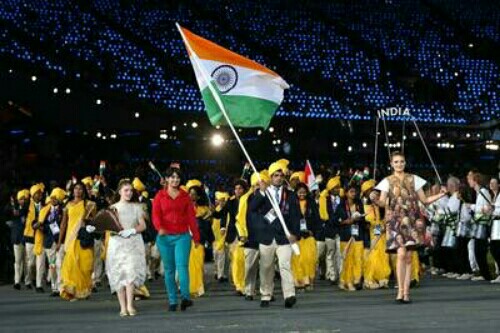 There is a reason why we are celebrating Abhinav Bindra’s 4th position. Moreover, Rio Olympics 2016 has got Indians something to cheer for like never before in the form of ‘Gymnast Dipa Karmakar’ – The 22-year-old athlete from Tripura who has scripted history by entering finals of Gymnastic competition in Olympics.

While, we are all set to watch Dipa Karmakar and other Indian Athletes competing at the Rio Olympics 2016, here we share almost all the problems faced by them prior to Rio Olympics: 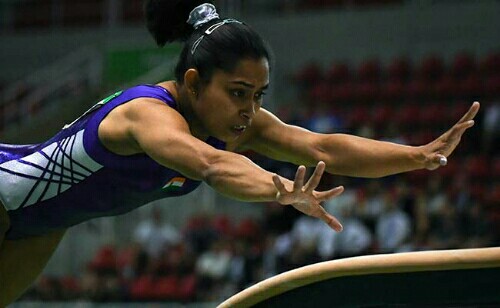 It was barely 9 months for Rio Olympics 2016 and all the athletes (several of them were already qualified for the Games) at the National camps were denied supplements. Since, Indian athletes were not given any supplements from months, it adversely affected their preparations. Yes, the athletes were sweating it out but for all the wrong reasons courtesy, Sports Authority of India (SAI) and several other Sports Federations.

It is unfortunate that while we criticize our athletes, we never try to look into the everyday problems faced by these lesser known Heroes. Instead of randomly blabbering about our failure at the Olympics, Shobhaa De should have instead expressed her concern about not giving these athletes the proper facilities and amenities, that too not during the Olympics but somewhere during last year when she was busy clicking her own selfie along with her page 3 socialites with those brooms enacting to carry out Swacch Bharat Abhiyan proudly.

In order to take care of their dietary needs with no help from the Sports Authorities and federation, athletes had to spend anything between Rs. 10,000 to Rs. 15,000 per month to meet their needs. When an athlete brought the issue in front of an official, he was chided away by the official saying that he was not the only one who is suffering.

All those Indian celebs venting out on Twitter should have rather arranged funds and sponsored the dietary supplements of these athletes. However, while the athletes were sweating out in their struggle, these celebs were busy spending on other stuff. We certainly don’t mind their spends but it hurts badly when they so called criticize then complain about athletes not performing at an International event.

With all the blame game between various Sports federations, back biting and a lot of chaos, if at all the supplements were provided it was generic specific and not athlete specific.

In 2012, 6 Runners in the Indian women relay team tested positive for steroids and the nation shammed the athletes. However, it wasn’t the fault of the girls but the failure of the system that not only spoilt the career of the girls but also their life. Well, when the government failed to supply athlete specific supplements to these girls, that their coach Mr. Ogorodnik from China had suggested, he himself brought the supplement from China.

After two years of having these supplements as scheduled by their government appointed coach, they tested positive for steroids. Unfortunately, the coach was sacked, who in a press release mentioned that it wasn’t intentional, as he had no idea that the Ginseng that he brought was contaminated with a banned substance. Moreover, he also stated he himself brought the Ginseng all over from China only when the Indian government failed to provide the supplement to the women.

If the system had met the demands, the women would have not consumed the contaminated Ginseng, not just saving their career but also their prestige and honor.  Moreover, the whole incident also proves that the support and training from the Indian Sports Federations is lacking big time. This is the reason why 687 athletes have been banned since 2009 according to the NADA (National Anti-Doping Agency) records.

A Marathon Runner Was Even Struggling to Buy His Running Shoes

Despite qualifying for Rio Olympics 2016, Nitendra Rawat, a marathon runner was struggling big time for buying his running shoes. This shoe did not cost more than Rs. 10,000 a pair but spending around Rs. 20,000 for his preparations already and sending some amount to his parents in Uttarakhand, he was not able to fetch enough money for his shoes. 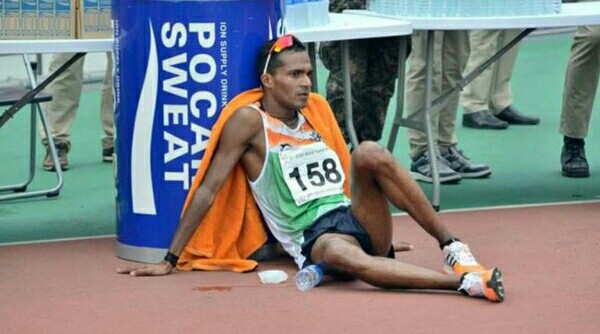 Though Nitendra eventually got his sponsor from another running enthusiast and also a dental surgeon, Amit Srivastava, we wonder where were Shobhaa De and others when Mail Today highlighted the Marathon runner’s struggle and also shared his email id – nitinrawat2012@gmail.com to help him in his preparation for Rio Olympics 2016.

This Cartoon by Cartoonist Satish Acharya dedicated to Dipa Kamakar for SportsKeeda.com sums up everything: 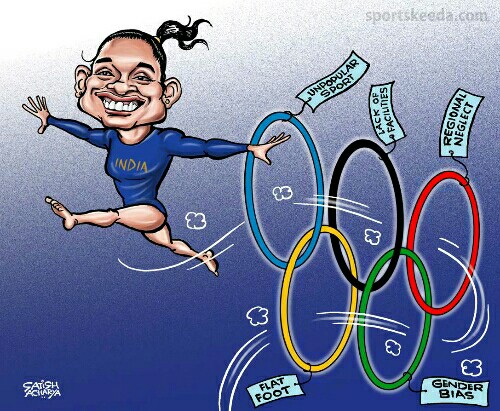 Athletics Journal: A Special Report on Doping via WSJ

Facebook Comments
About Deepti Verma 295 Articles
Deepti Verma is a Political/Social Writer with an opinion on almost everything! Follow @universal_rover