Often Lord Hanuman and King Bali are compared for their strength, valor, and power. However, Sankat Mochan Mahabali Hanuman was much-much powerful than King Bali. In fact, there is no comparison between the two. Moreover, since Lord Hanuman was an incarnation of Lord Shiva, and the son of Lord Vayu , he had a great amount of power right from his birth. In addition, he was blessed by not one, but many Lords when his father Lord Vayu became angry after Lord Indra used vajra on Bal Hanuman. 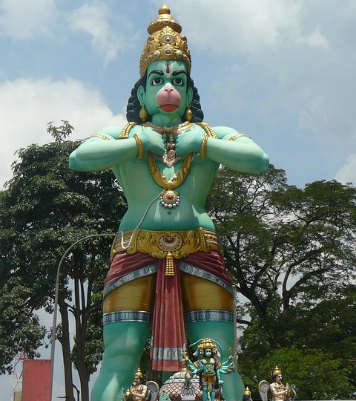 Hanuman had the power of inducing terror on his rivals

When all the Lords blessed Hanuman with some unmatchable powers, Lord Brahma, the creator bestowed the little boy with many boon. One of his boon included that nobody could ever kill Hanuman with any type of weapon in a battle. This means, even if Bali could continuously war with Hanuman, he could never wipe off Hanuman. What’s more, Lord Brahma even gave him the strength of inducing good amount of panic and fear in his rivals – which means even if Bali had the power to absorb half of the strength of his opponent, Hanuman could easily generate huge amount of fear in him. With such boon, it was difficult for Bali to face off Hanuman even though he had one indomitable advantage.

While, Hanuman could invoke a sense of fear in his enemies, he could even destroy the same feeling among his friends. Sugriv, Bali’s brother and even his biggest opponent who befriended Hanuman, not only benefitted from Hanuman’s boon but could even defeat Bali with the help of Shri Ram. Here, too one can only witness Hanuman’s spiritual powers which were far stronger and powerful than Bali.

Besides, Lord Hanuman Had Endless Powers Which Bali Could Only Dream

Indra’s boon made Hanuman’s body stronger than Vajra. Besides, Lord Varuna and Lord Agni made sure that the Vayu putra always remained protected and immune under the influence of Water and Fire respectively. In addition, while, Bali used to worship Surya before dawn by tossing mountain peaks and playing them like a ball, the same guru Surya devta bestowed Hanuman with 2 siddhis – “garima” and “laghima” so that he could attain both big and small forms. Also, it was Lord Surya who had told Hanuman to be with Sugriv, his spiritual son. Thus, making it clear that even the God whom Bali worshipped favored his opponents by giving them more power (Surya had given several boon to Hanuman) and strength (Sugriv gained huge asset in the form of Hanuman and Lord Ram).

Hanuman Had the Boon of Being Happy and Content Always

This was one of the major boons of Hanuman which made him highly dominant when we compare the strengths of Hanuman and Bali. While Bali was short tempered and was full with anger, Kubera’s blessing made sure that Hanuman remains happy and contented always. This strength of Hanuman made Bali weak in himself. The reason? While, Bali lost all his senses in anger, a peaceful Hanuman always knew how to get rid of trouble even in the worst circumstances.

Hanuman Was Immortal. He was Protected from all Sorts of Weapons and even had speed more than his father Vayu

How could Bali even compete with Lord Hanuman when the God of death, the Yama had himself blessed Hanuman with immortality. In addition, one cannot miss the fact that Hanuman was protected from all of Vishwakarma’s creations including weapons and objects. Moreover, Hanuman’s speed was more than Lord Vayu which Lord himself had bestowed on him as a blessing.

All these factors undoubtedly proves that Lord Hanuman was highly powerful than the Vanar King Bali. What are you views?