The protestations demanding OROP (one Rank One Pension) have cornered the NDA government, which had earlier promised  OROP reforms for the armed forces, and the debate surrounding OROP has taken centre stage.

So what is OROP ?

It is a pension system under which employees will get the same pension for similar rank and tenure of their service irrespective of when they retired. For example an employee retiring as a captain, after 20 years of service, in 2004, before the 6th pay commission will receive lesser pension as compared to a captain who retired after the 6th pay commission after completing 20 years of service. The hike that resulted due to the revamped pay grade won’t reflect in the pension of the servicemen who had retired before the mentioned pay commission. In simple terms OROP means parity between past pensioners and the present ones. 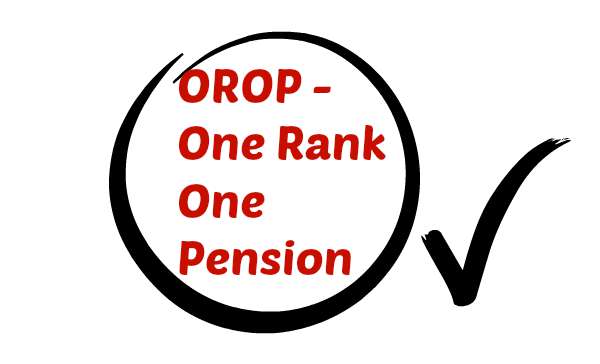 Till 1973 the Indian armed forces were paid as per OROP but then the Indira Gandhi government in an ‘ex-parte’ decision terminated One Rank One Pension scheme for the armed forces and ever since the demand for fair pension within the armed forces had simmered. The armed forces are the ones who put their lives in line for our safety and face great hardships in far off border regions, away from their dear ones.

Given the great sacrifices that the armed forces have made for safeguarding our country and the respect that they have earned, it is easy to see the issue of ‘ one rank one pension ‘ as an emotional and moral one. We naturally feel that our soldiers should get the best but the point is If OROP is financially feasible in the long run?

To fulfill all the demands of the veterans the govt will need 18000-20000 crores and this will raise the defence budget for pensions by 40%. Moreover the need to constantly adjust higher and higher rates of pension to achieve parity between the old and the new pensioners will multiply the financial burden on the government in the future.

But the most destabilizing factor of OROP will be the torrent of similar OROP demands from other governmental services. The railway employees have already started demanding a similar One Rank One Pension demand. The CRPF or ITBP can be the next. After all are they less deserving than the general armed forces?

In the run up to the 2014 Lok Sabha election , it was the congress party which first publicly promised to make OROP a reality in a desperate gambit to win votes from the sizable servicemen community. A motivated BJP, sensing an opportunity to make great electoral gains, promised OROP to the veterans of the armed forces. Now after winning the elections in a landslide mandate the government has to stand tall on its promises. Modi government has to fulfil their demands or else NDA’s promise of accepting OROP demands can be truly termed as ‘jumla’.

In such a situation it is best that a middle ground is reached, where by the veterans are satisfied and the financial burden on the government on account of OROP is limited.

Furthermore it has to be made absolutely clear that similar demands will not be entertained in the future. Since the situation has already gone out of hand, it is better if the Modi govt is able to reach an agreement with the veterans demanding One Rank One Pension, or else, instead of giving OROP it has to take the ‘Arop’.

India And The Colonial Baggage – The British Raj