Rajdeep Sardesai is a senior journalist, anchor and an author. This is the reason why he is always surrounded by news and controversy, most of the time for his own views and opinions on the microblogging site Twitter.

Here we share Rajdeep Sardesai controversies from the past as well as present: 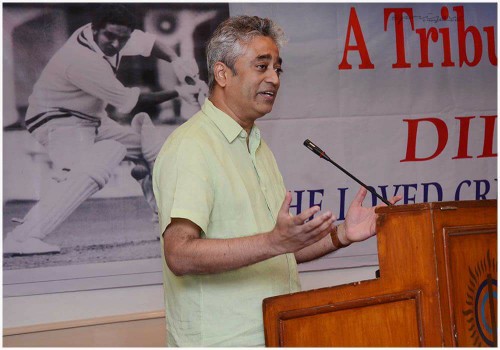 When Rajdeep Sardesai Was Slapped at Madison Square in 2014

Ahead of PM Narendra Modi’s speech in Madison Square on 29th September 2014, Rajdeep Sardesai was manhandled by a crowd (allegedly Modi supporters) in New York. He was slapped by one of the supporters of Modi. While, some of the onlookers alleged Rajdeep for provoking the crowd, a senior journalist at Dainik Bhaskar defended Rajdeep.

Mob of people attacking an Indian journalist for being critical of Modi on the past. Accused if being a traitor pic.twitter.com/6xOJTWAxaO

Rajdeep Sardesai and the Infamous Tweet of NaMo and Nemo

In February 2014, ahead of the Lok Sabha elections, Rajdeep Sardesai in a way compared Mr. Narendra Modi, then a Prime Ministerial candidate of BJP with his dog. Here’s the tweet that created havoc not just in India but around the world –

while Namo travels the country, my Nemo needs to be taken for a walk in the park! Different folks, different priorities! Enjoy the weekend.

Though his friend Ronnie Screwala warned him about the aftereffects,

@RonnieScrewvala yes for that ‘Oh so innocent tweet” >>> he has a record of 12 years of NaMo bashing – why not Sonia? @sardesairajdeep

The aftereffects as expected was beyond imagination. Here’s what Rajdeep Sardesai then tweeted,

My friend @RonnieScrewvala was right. Should never have Namo and Nemo in same sentence. Apologies to those offended!

When He Used the “F” Word in His Tweet

tonight time to say f off to those who call us ‘paid media’. we are journalists, not sensationalists or elitists. gnight.

A journalist using the “F” word? Well, that was enough! Even Amitabh Bachchan advised Rajdeep Sardesai not to use the “F” word in his tweets.

In October 2015, Rajdeep had a Twitter spat with the uncrowned twitter spokesperson of BJP – Anupam Kher, after which he decided to tweet less. It all started when Rajdeep tweeted about Shiv Sena’s hypocrisy. Post that the actor and husband of BJP MP questioned him back on his “desh bhakti”.

Here are the tweets

How sad that you chose such an insensitive expression to justify your attempt of trying to be a messiah of truth. https://t.co/C6lnXST35O

What desh-Bhakti have u shown towards d mass murder & exodus of Your fellow Kashmiri Pandit Indians in so many yrs? https://t.co/k1mK5iU3Yb

What is d point of debating with you my friend! It is like trying to wake up a person who is pretending to sleep.:) https://t.co/PsOQJQCkgg

The debate then continued on Rajdeep’s TV show where Anupam Kher once again started talking about Twitter and Rajdeep’s action of deleting one of the tweets about Kher. However, Rajdeep apologized for the same and later also tweeted his apology.

You are right sir. deleted because it was personal and below the belt. Not done. Apologies. As for guts, I fear God. https://t.co/S2NMzYZpDI

Post the entire episode, Rajdeep Sardesai Declared that He Will Be Tweeting Less from hereon. Here’s the Tweet:

Will tweet much less now. Have learnt my lesson. I wish you all friends, the very best. Life is too short, this country too great. Bye.

While, Rajdeep Sardesai decided to tweet less, popular TV anchor Ravish Kumar who hosts Prime Time on NDTV decided to quit Twitter in August, 2015 after being trolled heavily on Twitter.