Suryaputra Karn, the son of solar deity and Kunti was adopted by charioteer Adirath and his wife Radha. Kunti, as we all know had conceived Karna before her marriage to Pandu to check the boon given to her by Durwasa Rishi. Being a Suryaputra, he was born with a unique feature – the boy had a natural armour (Kavach) and earring (Kundal) in his body made out of gold to protect him. 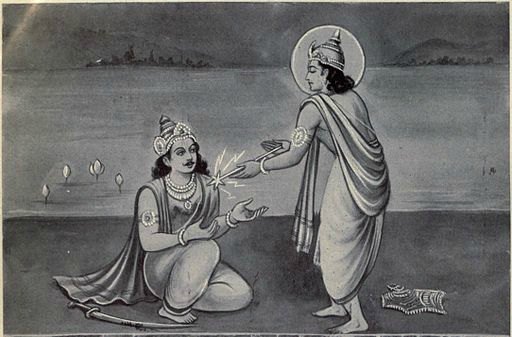 However, unlike the common perception his birth name was Vasusena and not Karna

The Name Karna was bestowed to Kunti’s son Much Later

In Sony TV’s Suryaputra Karn, we see Adiratha taking the little baby on a mountain and making an announcement in front of the Sun God that he is naming his son as Karna. However, the name Karna means peeler of one’s own shield. A little Karna didn’t peel any armour, so how come Adirath is naming him Karna in the serial? Besides, the name Karna was not given by Adirath.

In reality as in the Mythology, Adirath’s son got the name of Karna much later when he peeled his natural kavach and kundal and offered it to Lord Indra who came to make him vulnerable in order to protect his own son Arjuna aka Phalguni. So impressed was Lord Indra by his generosity that he gave him the title of Karna. He is also sometimes called as Vaikartana which has the same meaning as that of Karna since he gave his everything to a Brahmin (who was none other than the disguised Lord Indra)

Karna’s Foster Parents had given him the name of Vasusena

When Adirath and his wife Radha found this little boy, they were amazed to see him with the natural golden kavach and kundal. Now since, the little boy was born with the wealth, they named him Vasusena meaning the one who is born with wealth.

As a Kid, He was also called as Radheya

Vasusena’s foster mother Radha loved him very dearly. That is why, though his real name was Vasusena he was quite popular as Radheya i.e. the son of Radha. Her love for Vasusena was unconditional and never did Suryaputra Karn realize that she is not his real mother until of course Lord Krishna exposed this truth in front of Karna just before the Kurukshetra war.

He was also known as Angraj

When Vasusena wanted to participate in an archery tournament, Guru Dronacharya shunned him as the tournament was only for prince. Duryodhana who saw potential in Radheya to defeat Arjuna immediately offered him the land of Anga, so that he could participate in the tournament. This is how Vasusena was also called as Angraj. Most of the maharathis called him Angraj only.

All his life Suryaputra Karn remained kind to his foes, kept himself engaged in penances and ensured that he always kept his vow. This is the reason why he is also called as Vrisha. The other meaning of the word Vrisha is bull. Therefore, Rishi Vyasa addressed Karna as bull among the Hastinapur warriors. Besides, Karna, the unsung her of Mahabharat possessed the charitable nature under all circumstances. So, he was also referred as Daanveer.

Although Karna was a Daanshoor (a great warrior), he was often teased of his background and referred as a Suta or Sutputra. Nobody except Lord Krishna and Kunti knew that he was not sutputra but a  Suryaputra!

Surya Putra Karna : Know Everything About all His Wives