Whether Uzma Ahmed’s story is a true story or a farrago of distortion of facts, misrepresentation and outright lies (Hail Tharoor ji), is still a mystery. While, she has her own version of the story, the videos shown in the Pakistan media of her nikkah proves otherwise. Besides, there are lot of questions and missing links. However, out of all the things, one thing that is bothering me the most is her attitude towards Pakistan as a nation. 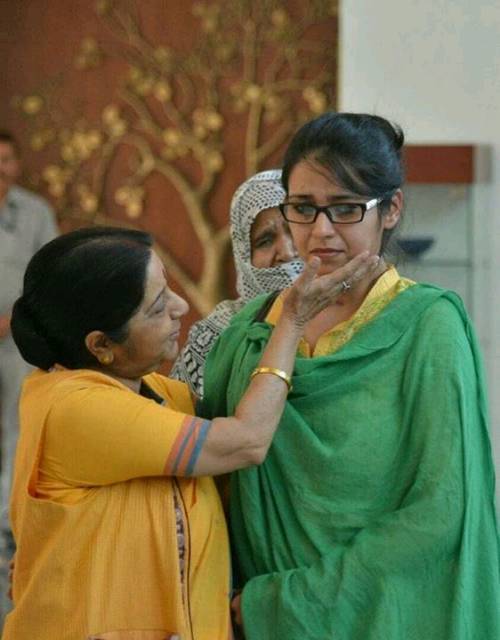 Interestingly, when even Indian External Affairs Minister Sushma Swaraj thanked Pakistan for the safe return of Uzma Ahmed despite the troubled bilateral political relations between the two country, Uzma in a press conference addressed the same country as a ‘well of death’.

“Well of death?” even though the truth lies in the fact that Uzma could not cross the Wagah border back without the support and cooperation of the Ministry of Foreign Affairs of Pakistan? Besides, how about Pakistani judiciary and diplomats that helped her thoroughout the entire process?

In fact, without the aid of Pakistani establishment, it would have not been possible for her to return India. And, here, Uzma despite knowing these facts is calling Pakistan a death trap?

“Well of death?” even when Barrister Shah Nawaz Noon argued her case almost like a father figure? Sushma Swaraj lauded Justice Mohsin Akhtar Kayani for his verdict on humanitarian grounds but Uzma in her press release had nothing to appreciate about Pakistanis who helped her. How very thankless!

Well, Uzma Ahmed you might have gone through all your alleged tribulations but labelling a nation on the basis of one person without acknowledging the help of several others somehow makes me question you, even if I want to believe your story. Besides, calling Pakistan a death trap on the basis of one Taahir Ali, is like calling all Muslims as terrorists.

What About this WhatsApp Message of Uzma Ahmed to Taahir Ali?

Uzma throughout have mentioned how Tahir Ali is a meany guy who told her lies. She even maintained her statement that she had no clue that he was already married and had 4 children. However, this Whatsaap message sent by her to Taahir narrates a different story altogether. 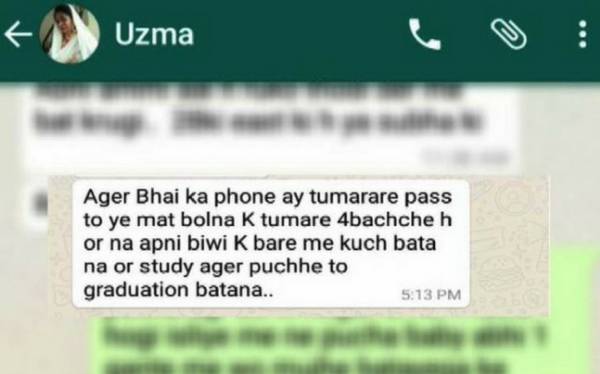 Here, she is not only requesting him to keep mum about his previous marriage in front of her brother, but is also telling him to lie about his education to her brother.

In the press conference, Uzma Ahmed mentioned if one google search about Buner, one can see it was occupied by Taliban in 2008-10. She also mentioned how miltiary operations occur in Buner regularly. She talks about all the worst things related to Buner.

However, one thing that is surprising me and several others is her visa details that clearly states her destination as Buner, Khyber Pukhtunkhwa. Logically, if she can tell us to google search about the place that she visited, being a literate (Oh, she is a doctor!), I am sure she must have google(d) already to know where she was visiting in the first place. In such a case, the history of geography shouldn’t have surprised her. 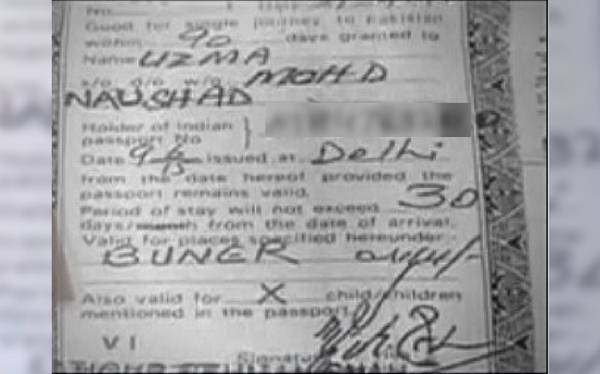 Moreover, foreign nationals visting Pakistan cannot get visa for Khyber Pukhtunkhwa unless and until the sponsor gives a guarentee. Here in this case, Taahir’s father became her guarantor. A quick google search (as advised by Uzma) tells me that any area that Pakistan feels unsafe needs such provision. This further indicates that Uzma was well aware about the situation there. I am sure if she can tell us to google search, she would have herself searched about the place before tripping off. However, in her statement she expressed that going to Pakistan is easy, the visa process is easy but coming back is not. Oh well!

Despite being aware of everything, she visited. Ok, for a moment, I believe that love is blind but then why o why you label the whole country as ‘death trap’ despite you being warned through the country’s visa documents about the place.

Lastly, you’ll see Uzma Ahmed thanking even the office boys of the Indian High commission, let alone thanking the firebrand External Affair Minister Sushma Swaraj time and again, but not even once in the entire press conference did she thank the Pakistani lawyer and Justice Kayani who played a very pivotal role in her return to India. 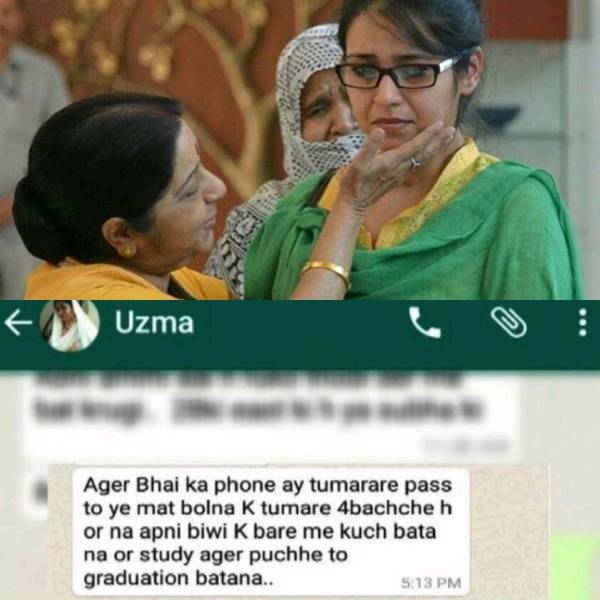 Doesn’t all these things sound fishy? Nevertheless, IB should keep this ‘Daughter of India’ under special watch until all these questions are answered. No wonder, there is more that meet the eyes in this story. Aha, this reminds me of Republic TV. Mr. Goswami how about diverting your slight attention from Mr. Tharoor to find out this mystery called Uzma that both India and Pakistan are keen to know?