So Another Big Diwali Release ! The teaser of Ae Dil Hai Mushkil was grandly splashed all over the papers today typical Karan Johar style!

So what do we have here: Aishwarya Rai Bachchan (Saba), Ranbir Kapoor (Ayan), Anushka Sharma (Alizeh) and I guess, Fawad Khan in a  guest appearance…!! 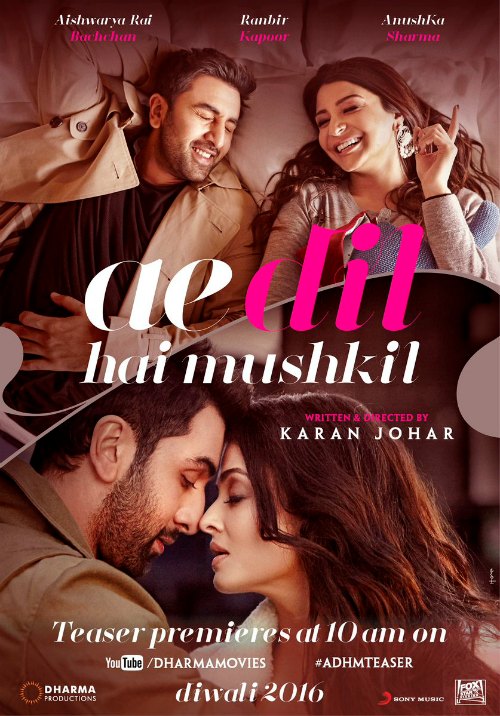 Yash Chopra and Karan Johar have the magic of even making a simple stone look beautiful and here we are talking about stunningly beautiful people who look magic on screen !

I hope this movie turns out to be that movie which has eluded the much need HIT for Ranbir ! Talent has never been a question here … It’s luck and recent choice of movies ..! Here he banks on a director who usually hits the right notes when it comes to commercial success and touching an emotional chord with the audience !

Then there is Aishwarya Rai Bachchan who is looking stunning in every scene and has always delivered  when there has been a trusted captain (read director) on board !!

Fresh from the success of Sultan and the only actress who has 2 movies in the 300cr club, Anushka may seem the least needy of the rest but would love to have a big hit with Dharma and we all know how the production house then takes care of them. Also probably it would be soothing effect to both Anushka-Ranbir Jodi post the Bombay Velvet debacle.

The music by Pritam is haunting with Arijit sounding soulful as always !

The trailer ends with talking of “ek tarfa pyaar”

One Sided love …. Now  who has not been through that at least once in their life (hitting a very large audience here )

Nothing much is given away in the teaser just beautiful faces , a haunting score and a glimpse into what promises to be and emotional and romantic roller coaster !

One for the hopeless Romantic !! So looking forward to Diwali …

So did the teaser blow u away ?

If Bollywood Made Gandhi Film in 2016, Here’s Who We Would Cast!

Facebook Comments
About Sushant Shetty 5 Articles
A Banker who loves his Food and Movies. His BFF is his sense of humour. See more of his whacky side Follow @sushantshetty