After the Vyapam Scam, DMAT scam is the latest scam to be unearthed in Madhya Pradesh in recent days. It is estimated that the money involved in the DMAT Scam may amount to a whopping 10000 cr.

Just like Vyapam Scam, DMAT Scam is a admission related racket under which aspirants looking for admission into Dental medical courses could quite literary buy their seats and the price for these seats ranged from 15 lakh to 1 crore. Though the DMAT scam started grabbing headlines only recently but the scam started many years back. 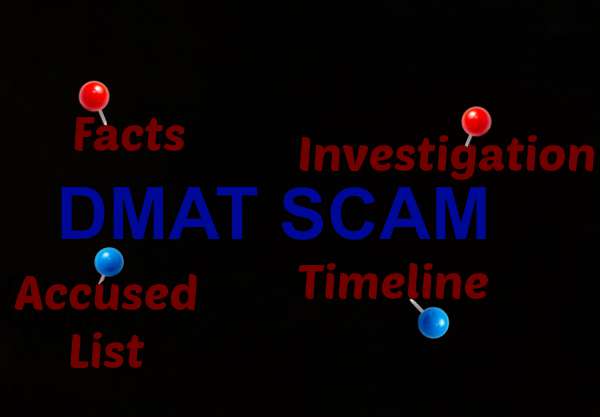 The Scam is said to have been going since 2006. In 2006, the DMAT (Dental Medical Admission Test) exam was called off due to leaked question papers and other irregularities.  There were many cases where the question papers were not sealed and aspirants were advised to answer on OMR sheet using pencils instead of black Ball pen so that after the exam the answer could be altered on the OMR sheets to facilitate the candidates who have paid lakhs for the seats.

After the DMAT 2006 was cancelled, the entire procedure of the test and admission came under the suspicion of the law authorities. Madhya Pradesh’s CM Shivraj Chouhan then issued an order that all complaints regarding the DMAT scam should be forwarded to Justice Bhushan Committee, which was a high court appointed SIT for monitoring MPPEB and DMAT related issues.

Despite these actions nothing really happened on the ground. No major accused were apprehended nor any breakthrough in the investigation of DMAT indiscretions occurred. The Sting continued unobstructed. It was only after Dr. Jai Chandra filed a complaint of fraud in 2013 that the irregularities surrounding the admission process came to the forefront.

In September 2013 two persons, Surendra Singh and Ranveer Singh, engaged in the illegal admission process were arrested. They were apprehended when a case of fraud related to a few students from Andhra Pradesh came to light.  These two with the help of an English speaking engineering student, who was not aware of the illegality of the matter, hoodwinked a few Medical aspirants from Andhra Pradesh.

After further investigation, the DMAT ex-controller AW khan was taken into custody for questioning but due to sudden illness Khan was rushed to the hospital where he died. Due to the death of Khan the investigation on DMAT scam suffered and could not make any headway until the whistle blower Anand Rai made some startling revelations and filed a petition in Supreme Court demanding a CBI inquiry into the DMAT Scam. This brought the Scam into media limelight.

At the same time the arrest of Ex-controller of DMAT and its treasury Mr. Yogesh Uprit opened the floodgates of information pertaining to the scam. The information from Uprit’s questioning has provided the true scale of the scam and has led to the arrest of other accused. The arrests and the statements of the accused have revealed how a big nexus between officials, fraudsters and brokers used to arrange seats for undeserving candidates in reputed medical institutions for a hefty payment.

The aspirants who paid them money were advised to leave their OMR sheets unanswered, which ware later filled by the gang so that the students got sufficient marks for admission into their college of choice. It is reported that the candidates who have paid money to the gang used to get the exact cut off mark which was required for admission into their college of preference.

Yogesh Urpit – The Ex-controller and treasury of DMAT, he is alleged to be one of the main mastermind of the scam. He is the former Director of Madhya Pradesh Professional Examination Board and is linked with Vyapam Scam as well. He is reported to have laid the basic foundation of the nexus between admission agents, brokers and officials.

Anupam Chouksey- He was the director of LN Medical College and the secretary of DMAT. He has accepted playing a part in few of the irregularities surrounding the Scam.

Surendra Singh Chauhan – He is one of the duo who were arrested in 2013. He has confessed of arranging the admission of fifty candidates. Surendra is a class 10 dropout.

Ranveer Singh Anand – An enginner by profession, he was arrested along with Surendra in 2013. He had played a part in duping a few candidates from Andhra Pradesh with the help of Surendra.

Sandeep – A native of Uttar Pradesh, he was arrested in relation to the DMAT scam by the police.

Rajendra Singh – A resident of Rewa, Madhya Pradesh, he was working as a contractor in Bhopal and is known to have political links as well. He was arrested by the police in relation to DMAT scam.

Jitu – He used to present himself as Dr. Raghuvanshi and used to impress others by not taking ther call on his mobile phone and instead messaging ‘Iam busy in OT’. Jitu was a key participant of a 6 men gang that also included Surendra, Ranveer,Sandeep and Rejendra.

Adarsh Kumar – He is a student of National Institute of Technology in Raipur and a native of Bihar, he was also a member of the gang of 6. This gang had a network in three states- MP, UP and Chhattisgarh.

The DMAT Scam has run for at least nine years, robbing many meritorious students of their deserved seat in Dental Medical colleges. The DMAT filled more than 1500 seats every year in private Dental and Medical colleges in various courses. There have been allegations that many high ranking officials, judges and ministers are involved in the Scam. It is high time the CBI is given the charge of investigating this massive scam so that the people in high places who were part of this nexus could be brought to justice.

DMAT Scam: 7 Facts That Explains Everything About This Scam

Vyapam Scam: History of Controversial Statements by Babulal Gaur That You Shouldn’t Miss!

Facebook Comments
About Deepti Verma 284 Articles
Deepti Verma is a Political/Social Writer with an opinion on almost everything! Follow @universal_rover