Throughout the 1st and 2nd cycle of the post-cold war era, there has been strategic re-posturing among the major powers having stakes in Asia. Thus the relations between major powers have seen significant changes. However, India and the United States have bridged their cold war era distance and are now in a firm strategic embrace. Similarly, Russia and China have mended their cold war era differences and have been in a de facto tactical alliance in the inner Asia region. 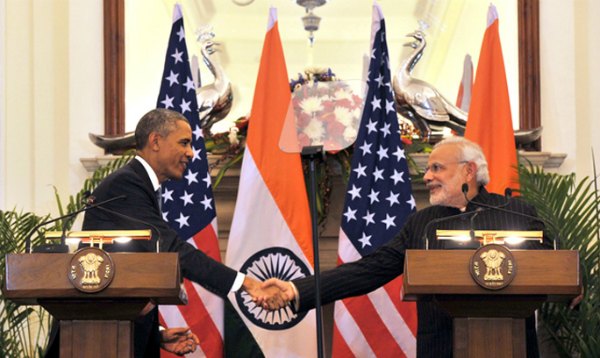 The Indo-US relations have been one of the most transformed relations in the realm of international politics. The relation between India and United States thawed after the end of cold war when the unipolar nature of global order forced India to engage with the United States. As the Indian economy grew rapidly after liberalization, the stature of India as a regional power in Asia also grew.

India was now seen as a democratic counterweight to the behemoth that China was appearing to be in the early 2000s. As such India came into the geopolitical calculations of the US in Asia and the United States started seeking greater engagement with India, with an interest to build a geopolitical as well as an economic partnership with India.

The Growing Bonhomie between India and United States

The Indo-US Civil nuclear deal was a landmark agreement which cemented Indo-US relations. Despite India not being a signatory to the NPT, the United States saw India as a responsible Nuclear power and paved the way for the Nuclear Supplier Group waiver to India. As such, India is the only known nuclear power state, which can take part in global nuclear commerce despite not being a signatory to the NPT.

Though even after a decade of the deal not a single US Nuclear reactor is functional in India, it brought trust into the equation and laid the foundation for future partnerships between India and the United States. The partnership between India and United states in the sphere of defence has grown substantially.

Also Read: The Return of Geography in International Relations

United States, which had no substantial presence in India’s defence market a decade back, is now the 2nd largest arms exporter to India and was the largest exporter in 2014, momentarily supplanting Russia. The Logistics Exchange Memorandum of Agreement (LEMOA) agreement that was recently signed between the two countries only comes short of a declared military alliance.

Apart from defence, US have been mostly supportive of India’s geopolitical aspirations. From the US’s declared support for India’s entry into the UNSC permanent membership to its role in India’s inclusion into the Missile Technology control Regime, the United States have been proactive in supporting India’s aspirations internationally.

The Russo-Sino relations steadily blossomed after the dissolution of the soviet Union. The anti-Soviet US-China alliance of the cold war era ended with the dismemberment of the Soviet Union. In a unipolar world in the 1990’s, both Russia and China saw the United States as the main geopolitical rival.

Moreover, Russia and China shared a symbiotic economic relationship as the demands for energy skyrocketed in the growing Chinese economy and it sought to meet its energy demands through Russian exports of hydrocarbons.

Also Read: India to Join The Superpowers List by 2030?

From declaring a ‘constructive partnership’ in 1992 to jointly announcing a ‘strategic partnership’ in 1996, the Russo-Sino relations strengthened at an alarming pace. The convergence of geopolitical interests made it easier for the two countries to solve their cold war era disputes. The Russo-Sino border dispute was amicably solved and it led to stronger Russo-Sino partnership in the region.

The establishment of Shanghai Co-operation Organisation has created a bloc that is spearheaded jointly by Russia and China. The SCO has kept the US influence at bay in the central Asia and helped both Russia and China to further their geopolitical and economic interests in the region. The Russo-Sino co-operation in the inner Asia region and their partnerships in military and security domain amount to an implicit alliance.

In the 21st century as India moved closer to the United States, Russia and China converged to secure their shared geopolitical interests in Asia. This has transformed the geopolitical arrangement that has existed in the cold war era. The Russo-India strategic partnership doesn’t seem so ‘special’ as Russia strengthens its ties with China, India’s chief geopolitical rival in Asia, and India engages in new partnerships with the United States to counter Chinese assertiveness and influence in the Indo-Pacific region.

The evolving geopolitics of Asia has rendered India without an ‘all-weather friend’. Even if India had no strategic partnerships with US, the Russians wouldn’t have risked an all-out conflict with China in an event of Chinese aggression on India. The ‘special’ in the relationship between India and Russia has long been shadowed with pragmatic geopolitical considerations and utilitarianism. The Russian outreach to Pakistan and its decision to conduct a military drill with the Pakistani Army highlights the above fact.

India, which itself aspires great power status and is in its own right a pole in the multi polar world order, cannot expect to be restricted in its engagement with other powers due to its ‘special’ relationships with any friendly countries and the same goes true for the Russians (in relation to its ties with Pakistan) as well.

In today’s asymmetrically multi polar world, it is very likely that powers will compete and co-operate in different fields at the same time but in terms of strategic convergence between poles on geopolitical considerations, India and United States will come closer to counter China in Asia and China and Russia would jointly continue to challenge US’s slowly waning power and influence in Asia and in inner Asia particularly. Russia may not be India’s ‘all weather friend’ anymore, but it is still better than to be with no friends at all.