“What goes around comes back” – the famous “hug” that has traversed across many nations, cut across different diplomacy, has made an infamous come-back in our own parliament. This time the “Challenger” clearly outsmarted The “Originator” with impeccable timing of the hug and celebrated his success with a wink. Clearly there was no love lost. The Gandhian act, was shrewd and redefined the old saying “Revenge is best served cold”. And here I was hoping for some old school love – never the less, it hit bull’s eye and headlines too. 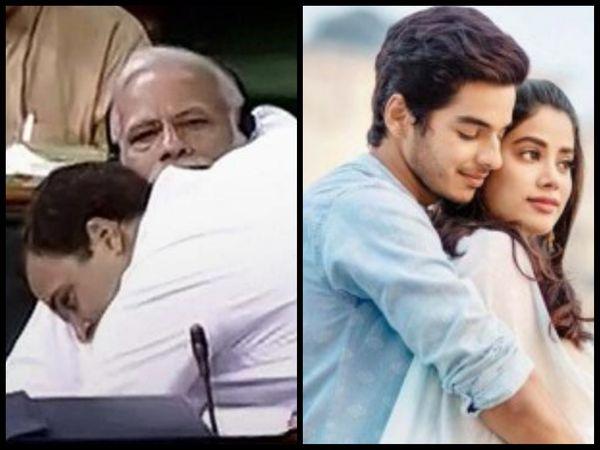 Cinema is pretty much relative of times we live in – hence “Love stories” have made way for “Hate Stories” and its unwarranted sequels. Always a sucker for good love stories, clearly miss the “feel good” romantic movies of 90s. Last week, love stories did make a come back of sorts and so was back “Nepotism” in the form of Dhadak.

The movie was received with some harsh criticism for its content and not standing “tall” enough as its original “Sairat”. Some of the pseudo-intellectual critics has made it their dharma to criticize any movie that comes out of the production house that goes by the same name. Lets get this straight – Nepotism exists in every walk of life, so it is silly to single out Bollywood as it is to rebuke a remake on the basis of its original.

The whole point of a re-make is perhaps to narrate the story from another lens. Otherwise, it is better to dub the original. Thankfully, cinegoers overlooked both criticism and nepotism to shower some genuine love. The climax of “Dhadak” is a chilling reminder of how intolerant are we as a society even at the cost of destroying our own ones.

We may mock our neighbour for keeping snakes at their backyard but fact of matter is we have our share of Voldemort’s too and we live in denial. Humanity alas can never be benchmarked on relativity. On the Judgement day, if ever there is one, we all will be judged on standalone basis.

The “Idea of India” has been challenged like never before and both school of thought (right wing and left liberal) are deeply flawed in their argument and approach, being dismissive of each other. When as a nation we should debate on education, agriculture, jobs, alternate resources, housing, we end up endlessly discussing symbolism of religion and token nationalism. It is ironic then that a country that is deeply invested with natural resources and guarded by water & mountain, is still counted as an emerging economy and battling dependencies in form of US and China.

Never mind, Cows & a little munchkin Taimur continue to make headlines in India today – though not sure how much they warrant the attention. Speaking of which, a little trivia – long before Cows became national obsession, Bong moms used to term their kids as “Cows” (of course in Bangla referred to as “Goru”), every time they felt their kids displayed an act of stupidity or ignorance.