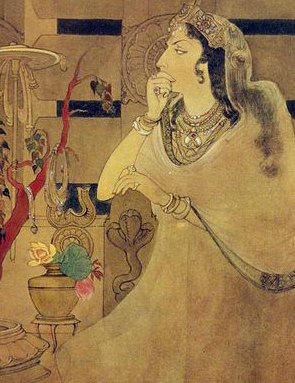 Kaurwaki was not a Kalinga Princess but a Fisherman’s Daughter

Unlike portrayed in Shah Rukh Khan’s Ashoka, Karuvaki was not a Kalinga princess but a fisherman’s daughter. She was born and brought up in Kalinga only (the present day Orrisa).

Ashoka Met Kaurwaki During His Exile in Kalinga

When Samrat Bindusar on the insistence of his first son Rajkumar Sushim sent Ashoka away from the boundaries of Magadh, he came to Kalinga. Being in exile, he went incognito and this is when he met the beautiful girl Karuwaki also known as Charuwaki/Kaurubaki unlike shown in Chakravartin Ashoka Samrat where Karuwaki seem to be boarding the same ship as that of Ashoka within Magadh.

Devi was Ashoka’s first wife and the mother of his first two born – son Mahendra and daughter Sanghamitra. However, Devi being a merchant’s daughter didn’t accompany Ashoka when he returned Pataliaputra. Later, when he was sent in exile he married Karuvaki. So, Karuvaki can be his second wife.

However, Ashoka’s royal consort and the chief Queen Asandhimitra’s wedding period is not known. This is the reason why there is always a confusion between them as who is the second wife – is it Kaurwaki or is it Asandhimitra. However, it is widely believed that Queen Asandhimitra was Samrat Ashoka’s fourth wife, the third being Prince Kunala’s biological mother Queen Padmavati.

The Allahabad edicts mentions that Queen Kaurwaki was the mother of Prince Tivala. Now, Prince Tivala was Samrat Ashoka’s second son and third born. Tivala supposedly was Ashoka’s favorite son and also the potential successor. However, it appears that he died before Ashoka. He however served Takshila in the presence of Samrat Ashoka as the viceroy of Takshila.

The Ashokian edicts clearly states how on the advice of Queen Kaurwaki the Samrat was changing his lifestyle. Ashoka, the Great himself emphasis on the edicts that he started a series of welfare measures for the people only on the advice of Karuvaki. This proves that Karuwaki was an influential queen.

The historical evidences and proofs narrate that Karuwaki later converted into Buddhism and even became a sanyasin.