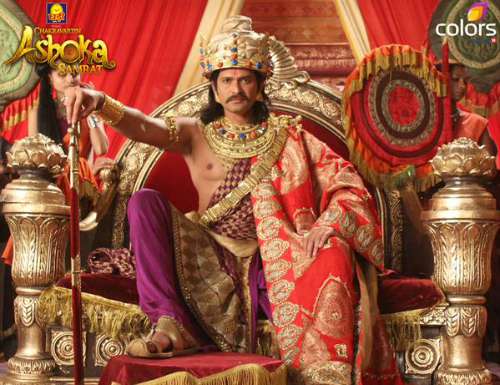 Early Life – His Mother Died the Moment He was born

Durdhara, Samrat Bindusar’s mother once ate as that of his father Chandragupta Maurya when she was pregnant. Both his parents had no clue that the food eaten by Chandragupta Maurya always had poison in it to make him immune from poison. This was done by Chanakya as a precautionary measure to save Chandragupt because back then Chandragupt had lot of enemies and attempts were made to kill him by poison. So, when Durdhara ate the same food the poison spread across her body immediately and it was almost impossible to save her.

However, before, she could breathe her last, Chanakya who had adequate knowledge of Ayurveda through his skills removed Bindusara from his mother’s womb by cutting off her stomach. This was nothing but first cesarean operation ever conducted. Bindusara was born, however, his mother died.

While, in the TV serial we can see only 4 wives, it is said that Bindusara had 16 wives. Also, one can only assume that he had 8 sons because according to a Tibetan writer Tarantha Ashoka killed his 6 brothers to get to the throne and spared one who later went on to become his Uparaja or deputy king.

Ashoka was born to Bindusar’s wife Dharma in 304 BCE while Mahan Samrat Chandragupt died in 298 BCE, this makes it obvious that Bindusar married almost all his main wives including Dharma before the death of Chandragupta Maurya. Sushim was elder to Ashoka. Later when Bindusar turned 22 and Chandragupt decided to retire Samrat Bindusar became the next Samrat.

Political Life – He Conquered the Peninsular Land Between the Two Seas

Almost all the sixteen states between Bay of Bengal and Arabian Sea came under him except Kalinga (present day Orissa) which was later conquered by Ashoka. Chanakya helped Bindusar in becoming the absolute monarch by capturing all these 16 states. No wonder, the Greeks called him Amitrochates – the Foe Killer and was also given the title of Ajatashatru – Man without any enemies. What’s more, he shared good relations with the Greeks and also the Helenic West as per described by the Tibetan writer.

The Last days – When Bindusara Died Before Appointing His Heir

It is said that though Bindusar always wanted his elder son Susima or Sushima to become the next Samrat, the same was not favored by the Brahims whom Sushim often insulted. These Brahmins supported Ashoka, the son of a queen of lower status but who belonged to the Ajivika sect. This is how Ashoka became the next heir though he was not the original choice of Samrat Bindusar.

Was Samrat Bindusara Really So Emotional and Sentimental?