In his life, Samrat Ashoka married not once but five times. While, three of his marriages were out of love, two were mainly for political reasons. Needless to say, Samrats and Kings were bound to marry princess of equal status under imperial pressure.

It is interesting to notice that only one of his wife belonged to a royal background, one is assumed to be a princess and rest three where commoners who came from a humble background. 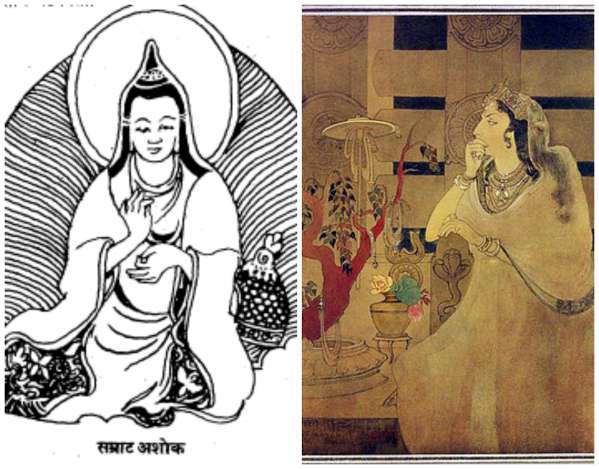 Here we share everything about Samrat Ashoka and his wives

Samrat Ashoka Married His First Wife Devi When He was 18

When Ashoka turned 18, Samrat Bindusar made him the viceroy of Avanti, a region in Ujjain. It is interesting to note that Ashoka that time was known as a heartless general and that was precisely the reason why he was sent to Avanti to curb an uprising. However, even the heartless general fell in love with a common girl and married her. The girl was none other than Samrat Ashoka’s first wife Maharani Devi.

Ashoka’s first wife Devi did not belong to any royal family. She in fact, was a daughter of a merchant of Vidisha. According to Mahabodhivamsa, Devi however belongs to Sakya clan making her a relative of Buddha. This link is however disputed.

Devi was the mother of Ashoka’s first son Mahinda (Mahendra) who was born two years after their marriage in the year 285CE when Ashoka was 20 years old. 3 years later was born Sanghamitra, Samrat Ashoka and Maharani Devi’s second child.

When Ashoka married Devi he was not a Samrat but just a prince. Later, when he was called to Pataliaputra again, Devi didn’t accompany him. She stayed back in Avanti itself looking after her kids.

Rani Kaurwaki was a daughter of a fisherman who stayed in Kalinga (present day Orissa). According to the legends, Ashoka met Karuvaki and fell in love with her when he was living life in exile and had gone incognito.

Yes, when Ashoka could easily curb Ujjaini’s revolt just by his presence, he was praised and applauded for his bravery and skills. Rajkumar Sushim couldn’t bear all this and so he planned to defame Ashoka in front of his father’s eyes. He was successful in his approach and that is why Ashoka was compelled to go away from Magadh. He came to Kalinga where he fell in love with Kaurwaki and even married her.

Kaurwaki became the mother of Ashoka’s second son Tivala or Tivara who later became the viceroy of Takshila. Both the name of Kaurwaki and Tivala are found in Samrat Ashoka’s edicts.

The Third Wife of Ashoka was Rani Padmavati

Besides, though Kunala was younger than both Mahendra and Tivala, he was always seen as Ashoka’s heir. This makes us believe that Rani Padmavati would definitely be from a royal background and would be next in line after Devi and Kaurvaki.

The Fourth Wife of Ashoka was Asandhimitra, his Chief Queen

While, both his earlier marriages (Devi and Kaurwaki) were purely because of love before he became a Samrat, Ashoka’s fourth marriage was an imperial decision after he became the third Samrat of the Mauryan dynasty. This time he married a princess unlike his previous marriages and gave her all the royal rights.

Her name was Asandhimitra and she belonged to Assandhivat, a little kingdom which finds its presence in the present day Haryana. Yes, Asandhimitra who married Samrat Ashoka (not prince Ashoka) became the chief consort of Chakravartin Ashoka Samrat and continued to remain so till she died her own death in 240CE.

Also Read: No Ahankara Cannot Be Asandhimitra – Know the Reasons Why

The Fifth and Last Wife of Samrat Ashoka was Tishyaraksha, again a Commoner

After Samrat Ashoka’s chief consort Asandhimitra died in 240CE, her favorite maid Tishyaraksha took care of Ashoka. It is said that she attracted Ashoka by her charm, dance and beauty. Next, it is believed that Ashoka made her his concubine and even promoted Tishyaraksha to the position of Chief Queen.

The age difference between Tishyaraksha and Samrat Ashoka was huge. It is believed that Tishyaraksha was attracted to Ashoka’s son Kunala – the presumed heir to the Magadh throne. However, Kunala regarded her as his mother due to her position in the Kingdom that time. Tishyaraksha couldn’t accept this rejection and this is the reason why she blinded Kunala whose eyes attracted Tishyaraksha, the most.

Though the attraction of Tishyaraksha for Kunala do not have any historical evidence except that they are penned down in two Bengali novels, according to Ashokavadana it is known that it was Tishyaraksha who was responsible for blinding Kunala, Ashoka’s presumptive heir.

Lesser Known Facts About the Urban Life of Mauryan Empire

Was Samrat Bindusara Really So Emotional and Sentimental? – Know the Facts