Samrat Ashoka had 5 fives. However, with folklores, movies and TV serial focusing on love story between Ashoka Samrat and Kaurwaki, it is highly debated who was the real love of Emperor Ashoka – Whether it was his first wife Devi or whether it was Kaurwaki, his wife who belonged to Kalinga.

Let us understand few facts to understand who was loved or favored more by the third Mauryan Emperor – Samrat Asoka. 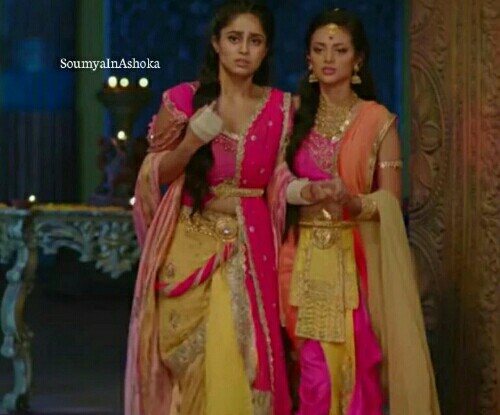 The love story of Samrat Ashoka and Devi is widely mentioned in the Ceylonese chronicles. She is said to be the daughter of a merchant who actually belonged to the Sakya clan – the same as that of Gautam Buddha.

Ashoka met Devi during his first visit in Ujjain and it was love at first sight for him. Though Ashoka was high impressed by Devi, the merchant’s daughter, she didn’t like him as he was famous for his arrogance. When Ashoka asked Devi’s hand in marriage, her father readily agreed but she declined the offer and made a strange demand. Devi insisted that she would marry Ashoka if and only he would resolve the issue of rebellions in Ujjain without any bloodshed.

Hearing this Ashoka left the place. When he didn’t return after two days, Devi thought the prince tricked them. However, when she was attending to the sick and hurt people she came across a wounded Ashoka. She took great care of him until he recovered. Post the recovery, Ashoka proposed Devi as he could resolve the Ujjain issue without bloodshed. Devi was happy and they married. Ashoka was 18 then. So, Devi was indeed Samrat Ashoka’s first love and it was an unconditional love.

Now let us discuss the story of Ashoka Samrat with Kaurwaki.

The name of Queen Kaurwaki is found on the Asokan edicts. Based on this, it is widely believed that the position of Queen Kaurwaki must be high as she is the only queen whose name has been immortalized in the edicts. The importance of Kaurwaki has been concluded from these edicts only.

So going by the historical data, it appears that, though both Devi and Kaurwaki was Emperor Ashoka’s wife, his first love was Devi with whom he had a love angle before their marriage. He did marry Kaurwaki but all those stories of their love before marriage is considered as highly fictional.