The TV serial Rishton Ka Chakravyuh right from the very first episode has kept the audience glued to the TV screens. The plot, the twists, the story – everything seems to be so intriguing. While everything about this Star Plus serial is so apt, the USP of the show is its brilliant star cast. 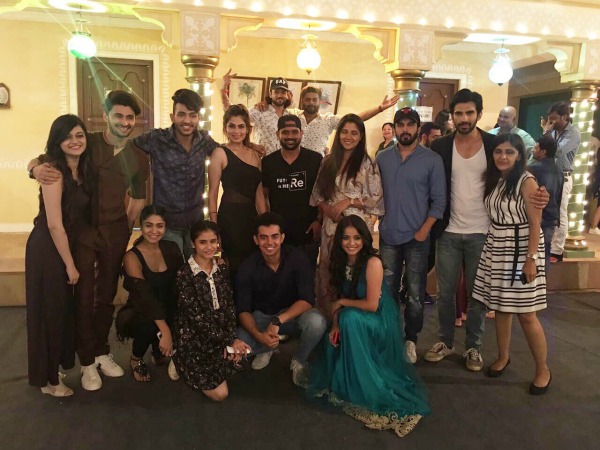 Here, we share the real names and background of the entire Rishton Ka Chakravyuh Cast:

18-year-old Mahima Makwana is playing the role of 17-year-old Anami. She debuted with Ballika Vadhu in 2009 at the age of 10 and became a household name after she essayed the role of Rachna in Zee TV’s Sapne Suhane Ladakpan Ke. In between she acted in several serials including Jhansi Ki Rani, Miley Jab Hum Tum, Mohe Rang de. Born and brought up in Mumbai, Mahima’s native place is in Rajkot.

Narayani Shastri is a popular face on Indian Television screen and everybody loves her immensely. She is known for carrying out powerful roles brilliantly. Her role in Piya Rangrezz as Bhanvari Devi Singh is still vivid in viewer’s mind. Besides, let me remind you she was the one who essayed the role of Kesar, Tulsi’s sister in Kyunki Saas Bhi Kabhi Bahu Thi. In addition, she has done several serials including Mamta, Piya Ka Ghar, Ghar Ki Lakshi Betiyaan, Kkusum and Koi Apna sa.

Ajay has been active in TV industry since 2007. In the year 2012, he was seen as Akash in Life Ok’s – Aisi Nafrat Toh Kaisa Ishq. Post that he entered Uttaran as the real Vishnu. He has done several shows in the past including Phulwa, Sujata, Love Story, Behenein, and Dil Se Diya Vachan. Here, in the serial, Ajay as Baldev is shown married to Satrupa but has an illegitimate child from Sudha (Sangita Ghosh).

Ankit Siwach is essaying the role of Adhiraj Pandey, the CBI officer. His looks instantly remind you of Sidharth Malhotra but many would agree he is a perfect combination of Sidharth Malhotra and Ranveer Singh. Rishton Ka Chakravyuh is Ankit’s debut serial. However, it wasn’t easy for Ankit to get this role as he had auditioned at least 100 times before for various roles. He is originally from Meerut. Here in the serial he looks perfect. It would be interesting to his chemistry with Anami as the story moves on.

Also Read: Everything You Wanted to Know about Ankit Siwah – Adhiraj of Rishton Ka Chakravyuh

Mohit Chauhan is yet another popular face on TV. He was last seen playing the role of Maamu in Star Plus’ Dahleez. Over the years, he has done several serials on several channels including V’s Sadda Haq as Mr. Kishore Aggarwal and Raja Janak in Mahadev. He has done Bollywood movies too. Mohit was seen playing the role of Shah Rukh Khan’s friend Uttam Singh in the popular film Chak De India. Here, in the serial it is interesting to watch Mohit as Shradh Pandit who loves his adopted daughter immensely.

Daughter of popular script writer Javed Siddiqui, Lubna has been acting from years. She started her acting in 1988 with Bharat Ek Khoj but took sabbatical soon after. She returned in 2005 with Baa Bahoo aur Baby where she played the role of Leela Thakkar. Post that she has done four serials and two Bollywood films – Just Married and OMG – Oh My God.

The head of the Empire, Vikram Singh is essayed by Ram Gopal Verma, a Padma Shri awardee and former director of NSD (National School of Drama). 77-year-old Ram Gopal Bajaj aka Dadaji aka Badde Miyan is a noted theater actor and is also seen in Hindi films. He has been a part of many films including Masoom, Mirch Masala, Chandni and recently released Jolly LLB 2.

Last seen as an antagonist in &TV’s Gangaa, Akash Gill is playing the role of Narottam in the serial. The illegitimate son of Baldev Singh from Sudha (Sangita Ghosh). A character with lot of shades, his role is a mystery. Earlier he acted as Bhagat Singh in a bilingual film Jung-E-Azadi directed by Shyam Benegal.

Model turned TV actor, Ieshaan Sehgal is essaying the role of Pujan and Kamini’s son. He has walked ramps for several designers and has also been a face on the hoardings on LAVA mobile, US Polo and TATA DOCOMO.

Also Read: 5 Reasons Why the Dialogue Writers of Rishton Ka Chakrayuh Needs Big Round of Applause

Looking to know about another Rishton Ka Chakravyuh cast? Drop the name of the character in the comment section and we shall update soon.