The serial Siya Ke Ram shows Lord Rama’s elder sister Shanta who doesn’t stay in the palace with King Dashrath and the family. In fact, she is the major cause of rift between the King and his first wife Kaushalya.

Now Shanta has never been part of any of the Ramayana we saw before be it on TV or on stage. So, seeing Lord Rama’s sister on TV screens have shocked almost all the viewers. This makes many wonder whether Shanta is a fictional character or a true story.

Here we share some of the lesser known and interesting facts about Shanta, Lord Rama’s Sister! 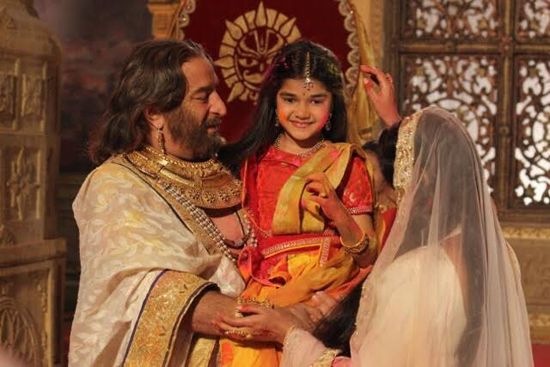 Valmiki’s Ramyana doesn’t say anything about Shanta but Ved Vyasa mentions her in Mahabharat. The mythology talks about King Lompad who adopts Dashrath’s daughter. In the later literatures, we however see the texts mentioning her as an elder sister of Rama.

Shanta was King Dashratha’s first child who he fathered without any difficulty. She however was given in adoption to the childless couple Queen Vershini (Queen Kaushalya’s sister) and King Lompad of Angadesh.

Shanta’s Beauty Was Unmatched and So Was Her Intelligence

Shanta’s beauty seems to be unparalleled. Some of the literature describes her sensuous side and how her beauty attracts Rishi Rishyashringa who later becomes her husband. Shanta was not just very beautiful but also well educated in vedas.  In the Telugu folk songs, it is described how angry Shanta is on Lord Ram after she comes to know that Ram has decided to abandon Sita after the gossips in Ayodhya.

Shanta’s Marriage with Rishyashringa – The Story

Years went by and Shanta lived happily with Lompad and his wife in the state of Anga. However, Anga was soon hit by a drought. Nobody could bring rains in the state except Rishyashringa (son of Vibhandak Rishi and apsara Urvashi). Yes, the same Vibhandak rishi who was seduced by Urvashi on the insistence of Lord Indra. The couple soon had a son who was named Rishyashringa however as soon as Urvashi’s duty was done, she left the rishi and went to the heavens.

This made the rishi hate the entire women race and so he raised his son in a forest isolated from the society. Rishyashringa never saw any human in his life except his father. He was not even aware of the existence of women. However, the rishi had immense power including the power to bring rain wherever he went or kept his feet.

Bringing Rishyashringa in Anga was the only way to end drought in the region. So princess Shanta (in some text a courtesan) was send to the forest were Rishyashringa was staying. Rishyashringa was totally amazed to see the magnificent beauty. Shanta could not only mesmerize the rishi completely but could even successfully bring the rishi in Anga, thus bringing in rain too. Rishiyashringa realized that Shanta was not jot beautiful but also intelligent and strong.

Thus was arrange the marriage of Shanta with the rishi. Though Vibhandak Rishi was angry initially, he was happy hearing about the marriage.

Shanta played a very important role in the birth of her four brothers – Ram, Lakshman, Shatrughan and Bharat. Yes, after Shanta was given in adoption, Dasrath was not able to father any children. However, like any other king Dasratha wanted a son not just to continue his lineage but also to become a heir to his throne. This is when he invites a priest to perform the putra Kameshthi Yaga to compel the gods to give him a child.

The priest he invited was none other than Rishyasringa, the husband of Shanta. So, this is quite evident that the four brothers were born after the marriage of their elder sister Shanta.

As a reader and a viewer, one can definitely argue that it is a later adaptation of Ramayana, but we must not forget that the many instances that we talk, discus and argue are all later adaptations of Valmiki’s Ramyana including Ram abandoning Sita, the famous Lakshman Rekha, the story of Sarbari feeding Lord Ram with berries and even Ahilya turning into a stone.

Know All About Urmila – Sita’s Sister and Lakshman’s Wife in Ramayana!