The plot of the latest serial Yeh Teri Galiyan from the house of Cinevistaas is something that we haven’t seen on the Indian Television yet. Well, it’s a story of two kids growing up in Kolkata’s red-light area Sonagachi until circumstances separate them. 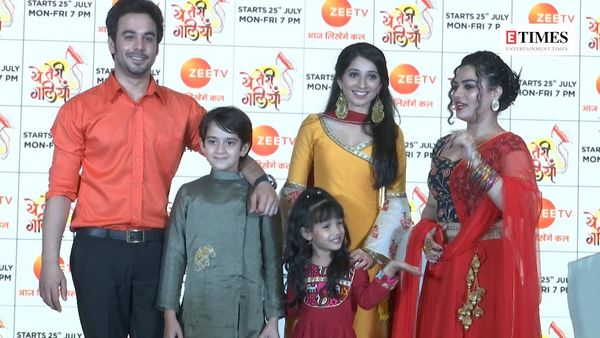 An intense love story, the makers of the serial is all set to challenge the age-old mindset of society towards commercial sex workers and life surrounding them. Good thing is, all the actors are doing a superb job in bringing the entire concept into play. While, you may wonder who plays what, here we bring you the real names and background of the Yeh Teri Galiyan cast.

A popular face on Indian Television, child artist Ayaan Zubair Rahmani is essaying the role of young Shantanu. Before this, Ayaan has done several serials over the years. He was seen playing the role of young Salim in Jodha Akbar, Ashoka’s young brother in Chakravartin Ashoka Samrat, Prahlad in Sankat Mochan Mahabali Hanuman and as young Chimna (Bajirao’s younger brother) in Peshwa Bajirao. He is the younger brother of Jannat Zubair Rahmani currently seen in Tu Aashiqui as Pankti Sharma.

The naughty, bubbly, chirpy and very pretty Puchki is played by the young girl Ruchi Mahajan. Ruchi’s playful role and joyful act is adding humour and happiness in to the otherwise sorrowful life of Pari Mahal ladies’ especially Badi Maa and Chhoti Maa.

The role of the elder Shantanu is played by Manish Goplani aka Bihaan Pandey of Thapki Pyaar Ki. Born in 1992 in Jaipur, Manish did his engineering and started working in Television world from 2014. This is Goplani’s third serial with Zee TV after Yeh Vada Raha and Detective Didi.  He was recently seen in a cameo role in Colors’ Belan Waali Bahu. The role of Shantanu is quite challenging for Manish as he has a responsibility of sharing across the message of the show through his character.

The grownup Puchki in Pari Mahal, Sonagachi is being played by the gorgeous Vrushika Mehta. She was last seen as Ishana in the serial Ishqbaaz where she was shown as Omkara’s potential love interest until the plot changed and a new character was introduced. In the past, Vrushika has been part of several serials. However, her most prominent role was that of Sharon Rai Prakash in Channel V’s Dil Dosti Dance. Here in the serial she plays the female protagonist who is born and raised in a brothel.

I’m sure you were mesmerized with Arpita’s beauty in the opening scene of Yeh Teri Galiyan serial – The eyes, the face, the innocence was something that we couldn’t stop appreciating. The actress who is playing the role of Puchki’s mother Arpita is Akansha Sareen who was seen as Veer’s step sister in Savitri Devi College and Hospital. This is the first time Akansha is seen in a Bengali avatar and playing a mother to a grownup kid.

Chanda is the real mother of Shantanu, Badi Maa to Puchki and like an elder sister to Arpita. The role of this responsible character is played by Anandi Tripathi. Who is Anandi Tripathi? Well, she is a famous Gujarati actress who has not only done several Gujarati films but also Gujarati plays. She started her filmy career in 2003. Off late she is also seen in Hindi TV serials. For instance, she was playing the role of Anshuman’s mother in AndTV’s Nagarjun – Ek Yodha.

One of the most aggressive contestants of MTV Roadies 8 and wild card contestant of Bigg Boss 8, Renee Dhyani is playing the role of Beauty. A constant challenge to the protagonists, Beauty is a trouble and it is good to see Renee in the role. Renee was previously seen as Rishi’s ex-fiancee Neha (later Sandeep Sikand’s wife) in Kasam Tere Pyar Ki starring Sharad Malhotra and Kratika Sengar.

The Thakur Maa of Pari Mahal, Sonagachi is played by 44-year-old Shubhangi Latkar. She is a Marathi actress who has done several plays, TV shows and films in her career. She started acting in 1998 but ventured into Hindi Film Industry and TV shows only in 2009. Her most prominent role in Hindi TV serial was in Zee TV’s Do Dil Bandhe Ek Dori Se where she played the role of Raghu’s mother Lata. She was also seen in Sanyukt serial along with Kiran Kumar.

Want to know about other Yeh Teri Galiyan cast? Drop the character’s name in the comment section.