The serial, Chakravartin Ashoka Samrat has many love stories – one love story in the current track is that of Rajkumar Sushim and Rajkumari Ahankara. While, Sushim is the eldest son of Samrat Bindusar, Ahankara is the only daughter of Ujjain’s king Rajajiraj. They both share mutual feeling of love and admiration. 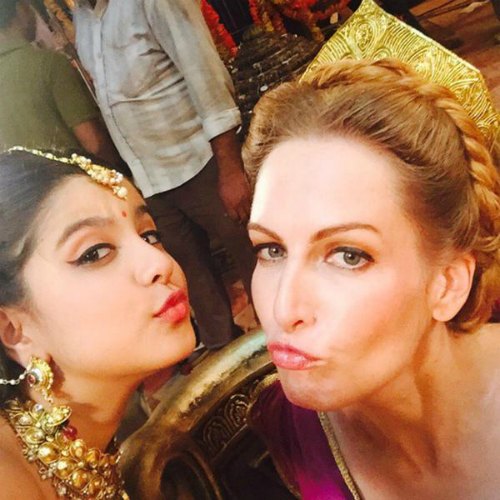 However, one wonders whether Ahankara will stick to Sushim or will she later have feelings for Ashoka?

Ahankara and Sushim – Love is in the air…

Ahankara and Sushim are madly in love with each other. The feeling has been mutual right from the very beginning. It didn’t take much time for Sushim to woo Ahankara and Ahankara too showed interest in Sushim from the day she met him. In addition, she even kept the Vat Savitri Puja for him which is kept for the long life of one’s spouse. What’s more in the last episode we even saw how shocked is she to know that her father is planning mass killing of the royal family including Sushim. Such instances do prove that Ahankara is in love with Sushim.

That day is not far when it will be revealed that Ashoka is the son of Samrat Bindusar then as expected Bindusar will be eager to make Ashoka his utradikari since he is the son of Dharma and has everything that an heir should possess. Now, will Ahankara still be with Sushim after this announcement? Will she still love Sushim or will her love automatically be diverted towards Ashoka? While, we still do not know whether Ahankara will be with Sushim or further have feelings for Ashoka, we do think it is quite possible in the upcoming episodes.

The reason for these speculations?

Well, when Ahankara was introduced in the serial she was mesmerized with Ashoka’s charm, but the moment she realized he is not a rajkumar but a common man her attitude changed instantly. This change in attitude gave Sushim enough chance to impress her and this is how they both fell in love. We won’t be surprised if Ahankara’s behavior and attitude changes when she gets to hear that Ashoka will be the next Samrat, and not her Sushim.

We all know Ashoka had three wives – Devi, Kaurwaki and Asandhimitra or perhaps more. However, nothing concrete is known about Sushim and his wives. So, perhaps Ahankara will stick to Sushim. No wonder, the traits of the two match with each other. And even if Ahankara develops feelings for Ashoka in the later stage and gives us a fictional story, we just hope that Ashoka neglects her big time. After all, we viewers are eager to watch Ashoka’s love story with Devi and Kaurwaki, not a haughty Ahankara.

Lastly, we just hope the Sushim – Ahankara love story continue as it is going now. No, we don’t want the ahankari Ahankara to be the love interest of Ashoka in the future.

What do you think? Also, what is your opinion on the same?

Ashoka, The Great Emperor – Know the Real History and Facts

5 Reasons Why We Love Rajkumar Justin in Ashoka Serial