So, the Assembly elections in the states of Assam, West Bengal, Kerala, Tamil Nadu and Pondicherry are over. While, we could see a massive saffron wave in Assam, one of the northeastern states (once highly dominated by Indian National Congress), the party doomed badly in all the other states.

However, much to our surprise, the Bhakts on social media seem to be rejoicing the victory of BJP in Tamil Nadu, Kerala, and West Bengal. Shocked? Well, yes!!! 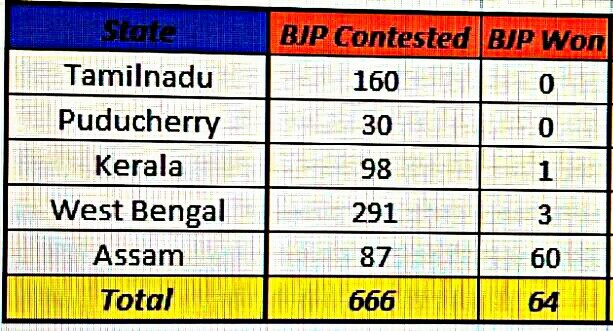 Here, we share a hardcore BJP Fan’s perception about BJP’s Victory in the Following States. No wonder, they have been claiming a massive victory in all the states. 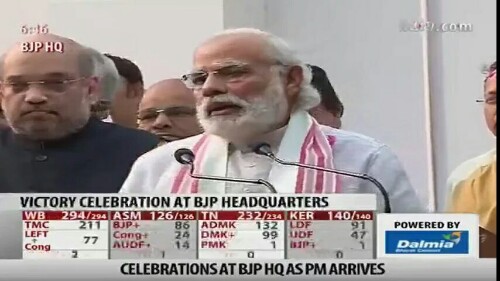 BJP Won 1 Seat in Kerala – What a Psychological Victory!

The members of BJP and the die-hard followers simply cannot control their happiness. After all, the party has finally opened its account in the state with at least 1 seat. How optimistic! By winning a single seat of Nemom they believe that they can now capture the masses. No wonder, it is a psychological victory for them.

BJP Won 0 Seats in Tamil Nadu – What A Mythological Win!

Though Amma showed BJP and other parties who is the real boss, the BJP seemed to be celebrating and rejoicing. This is what Shri Amit Shah had to say about victory of BJP in 5 states including Tamil Nadu –

“BJP’s performance in the 5 states depicts that its base is ready for the next Lok Sbaha elections in 2019. He also said that the election results in the states are a stamp of approval on PM Modi’s performance for the past 2 years.” Alright then!

BJP Won 3 Seats in West Bengal – What an Ideological Win!

BJP and its ally GJM won 3 seats respectively in the state of West Bengal and the proud Bhakts couldn’t stop gushing about the massive victory. This is an ideological win for them. No wonder, they still cannot see Didi’s dominance in the state and the fact that she will be the CM of WB for the second time that too consecutively.

I congratulate @AmitShah, his team, the state units & all Karyakartas for their constant efforts that keeps the BJP flag flying high!

According to the Bhakt’s BJP not opening its account in the Union Territory of Pondicherry is not BJP’s loss but the loss of people in Pondicherry. Yes, yes, now that Congress has won the election here, it is simply not Congress’ victory here but loss of the people. What a logic Sirji!

Moreover, when AAPians started trolling the bhakts, the saffron brigade trolled them back saying they didn’t win any seat in any of the states. What a slap on the face!

Editor’s Note – Do you have a different opinion or contrary view on the same? Email us at editor@nationalviews.com and we will publish it with credits.