The serial Ishq Subhan Allah has created a lot of buzz both onscreen and offscreen because of touching upon a sensitive subject like Triple Talaq. While there have been movies and TV shows questioning certain religious aspects of Hinduism and Christianity, the directors never really touched upon Islam though we had serials with a Muslim background. 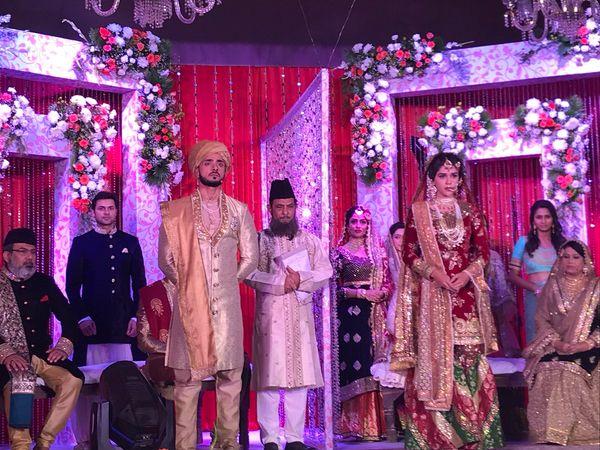 Interestingly, the serial touches upon a subject that was long due on Indian Television. Now that the serial has picked up good ratings right at the start, credit to the brilliant Ishq Subhan Allah cast, here we introduce the characters one by one revealing their real names and background.

The bold, brave and feminist Zara Siddique is played by young Eisha Singh. Born in 1998, Eisha is only 19. This is her third serial. She debuted in 2015 with Colors TV serial Ishq Ka Rang Safed and was then seen in Zee TV’s Ek Tha Raja Ek Thi Rani.  Originally from Bhopal, she has won the pageant of Miss Teen (Madhya Pradesh) at the age of 15.

While, her two serials made her win awards, this too look no different. After all, Eisha as Zara Siddique is all set to compel people to change their attitude not just towards the injustice happening to women in the Muslim world but also women in general.

Born and brought up in Dubai, UAE, Adnan Khan essaying the role of Kabir Ahmed relocated to Mumbai to pursue his interest in acting. He learnt acting from Anupam Kher acting school and was seen in numerous dramas and short films. He starred in Vikram Bhatt’s Web Series – First Among Equals along with Manit Joura aka Rishabh Luthra of Kundali Bhagya. In 2014, he was seen in Channel V’s Series, Friends: Conditions Apply where he was seen playing the role of Omar.

The shrewd Shahbaz Ahmad is none other than Vinay Jain who debuted in 2003 with Sony TV’s Jassi Jaisi Koi Nahi and was later seen in many TV serials including Woh Rehne Waali Mehlon Ki and Ek Shringaar Swabhimaan. Besides, TV, he has done supporting roles in various films including Karthik Calling Karthik, Cheeni Kum and Chala Mussaddi..Office Office. Here in the serial, he is seen as a man who can go to any extent to ensure things happen according to his needs. He is playing the role of Kabir Ahmed.

Remember Gehna Kaushik, the first daughter-in-law of Mrs. Kaushik ki Paanch Bahuein? Well, she is none other than Gunn Kansara now essaying the role of Aisha Ahmad – The wife of Shahbaz Ahmed and mother of Kabir Ahmed.  She debuted in 2011 and since then she has done several TV shows such as Ayushmaan, Sindoor Tere Naam Ka, Sajan Ghar Jaana Hai, Koi Apna Sa and Nadaniyaan where she essayed the main role.

The role of Zara Siddique’s father is played by Suneel Pushkarna. He is an actor/scriptwriter and a poet. He was earlier seen portraying the role of Devraj Mittal in &TV’s Ek Vivah Aisa Bhi and was also seen in 2016 film Marbles.

Shalini Arora who has been quite actively seen on Indian Television is essaying the role of Zara’s mother and Qazi’s wife. Earlier she was seen as Suman Kabra in Balika Vadhu, Baiji in Madhubala, Yashodha in Diya Aur Baati Hum and Janki in Bhagyalaxmi. She has also acted in films. Shalini was seen playing the role of Lal Bahadur Shastri’s mother in the movie Jai Jawaan Jai Kisan.

Remember the villainous Shraddha of Thapki Pyar Ki? Well, that’s Monica Khanna who is now seen playing the role of Zeenat Ahmed – the elder bahu of the Ahmed family who wants her sister to get married to her brother-in-law Kabir Ahmed. Monica played a parallel lead in Pyaar Ka Dard Hai Meetha Meetha Pyara Pyara and was also seen in episodic roles in Crime Patrol.

Recently, she was seen in the movie Poster Boys along with Bobby Deol and her Samiksha Bhatnagar is seen playing the role of Rukhsar, a girl in love with Kabir Ahmed. Over the years she has done several TV series and serials. Samiksha played key roles in serials including Bal Veer, Veera, Devon Ka Dev Mahadev, Uttaran, Kumkum Bhagya, Gupp Chupp and Jaane Kya Hoga Rama Re. She also did a cameo in Calendar Girls.

The role of Zara’s best friend is played by actress Rutpanna Aishwarya. Hardly 23, she started her career in 2016 with Channel V’s Mastaangi. She is from Jamshedpur, Jharkhand.

The role of the evil Meeraj is played by the tall and handsome Gautam Vig. Born and brought up in Delhi, Gautam debuted in Hindi TV serial with Mahesh Bhatt’s Naamkaran where he was seen playing the role of Avni’s best friend Ali. He is married to Richa Gera, a Human Resource Manager at ICBC Bank. The TV actor Ankit Gera who was also seen in Bigg Boss is his brother-in-law.

Here’s all about the Ishq Subhan Allah cast. Drop in the names of other characters in the comment box if you want to know about them.