The demand for Jat Quota has created quite a furor in India. While, the Jat community wants their long impending reservation quota, and the Haryana government has said that the Jats will be granted reservation in the coming assembly under special category, several others think that the Jat reservation is not justified:

The demand for Jat reservation quota is not a new thing. In fact, it all began more than two decade ago. Here we share the History of Jat Quota Agitation along with the Quota demand timeline. 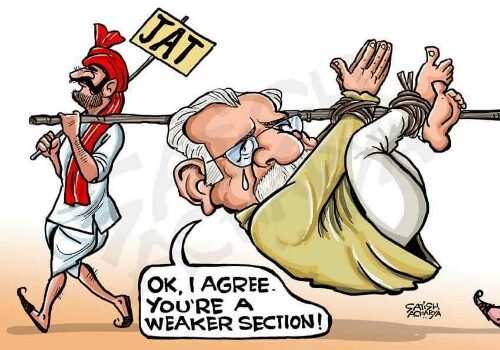 In August 1990, when the Mandal commission was implemented, the Jat community was not included in the Other Backward Classes list. Surprisingly, the Jat leader Devi Lal was the Deputy PM in the V P Singh government that had implemented the Mandal Commission recommendations, yet the Jats were left out. The reason being Devi Lal had left the party and the recommendation list was sans the Jats.

7 years later, Jats in Haryana, Madhya Pradesh, and Uttar Pradesh demanded that the Jat community should be included in the central list of Other Backward Classes. However, the demand was rejected by NCBC – National Commission for Backward Classes.

NCBC Recommended Inclusion of Jats in 1998 under OBC Category

A year later after the protest, NCBC recommended the Jat Quota reservation under the OBC category. However, the Inder Kumar Gujral government didn’t pay any heed to it.

In 1999, during the Rajasthan elections, Atal Bihari Vajpayee promised OBC status to the Jat community in Rajasthan. The promised paid off really well and the party won a whopping 16 seats out if the total 25.

Jats of Rajasthan Were Awarded the OBC Status in October 1999

The BJP government under the leadership of Atal Bihari Vajpayee delivered its promise and granted the Jats the OBC status in the state of Rajasthan except Bharatpur and Dhaulpur. This encouraged the Jats of other states who too now wanted the OBC quota.

In 2004, Political Parties Wooed the Jat Community in Haryana by Promising Jat Reservation

The political parties knew the weak point of Jats in Haryana by now and so almost all the political parties promised them reservations under the OBC category. Congress’s Bhupinder Singh Hooda too had promised Jat reservation but unlike Vajpayee government in Rajasthan, the Congress government even after winning the elections couldn’t meet the demand. This led to protests and Jat agitation, but at a smaller level.

In 2008, a Committee Was Formed by the Jats to Fight for Jat Quota

4 years later, the Jats finally formed a committee to fight for their demand. Next, Akhil Bharatiya Jat Aarakshan Sangharsh Samiti – ABJASS was born whose prime work was to organize protests and rallies. This is when the violence began when the members started destroying public properties.

Almost all the states in India with a substantial Jat populace started agitations and protest in their states. However, when the demands were not met, they organized bandhs, halted the trains and even burnt the public properties.

In 2014, just before the assembly elections, the Hooda government in Haryana approved the Jat reservation a day before the national election along with other 4 caste under SBC (Specially Backward Class) quota However, the Supreme Court and NCBC refused the Haryana government’s quota recommendations.

In July 2015, The Jat Quota was Rejected by the Punjab & Haryana HC

After the 2014 elections and prior to Haryana elections, even the ruling BJP government supported  Hooda’s decision. However, the Punjab and Haryana High Court rejected the Hooda Government’s  plea to give the Jats a 10% reservation.

After violent Jat Agitation in Haryana with the public property being destroyed, death toll rising to 19 and 200 people being injured, the Manohar Lal Khattar government has agreed to give Jats a reservation under Special Provision. Adding that, the 27% OBC quota in Haryana will not be disturbed.

Will this be the end of Jat Agitation for Jat reservations? Well, maybe in Haryana but who knows this step might be a start of Jat agitations in other 8 states who too have been demanding quota from long.